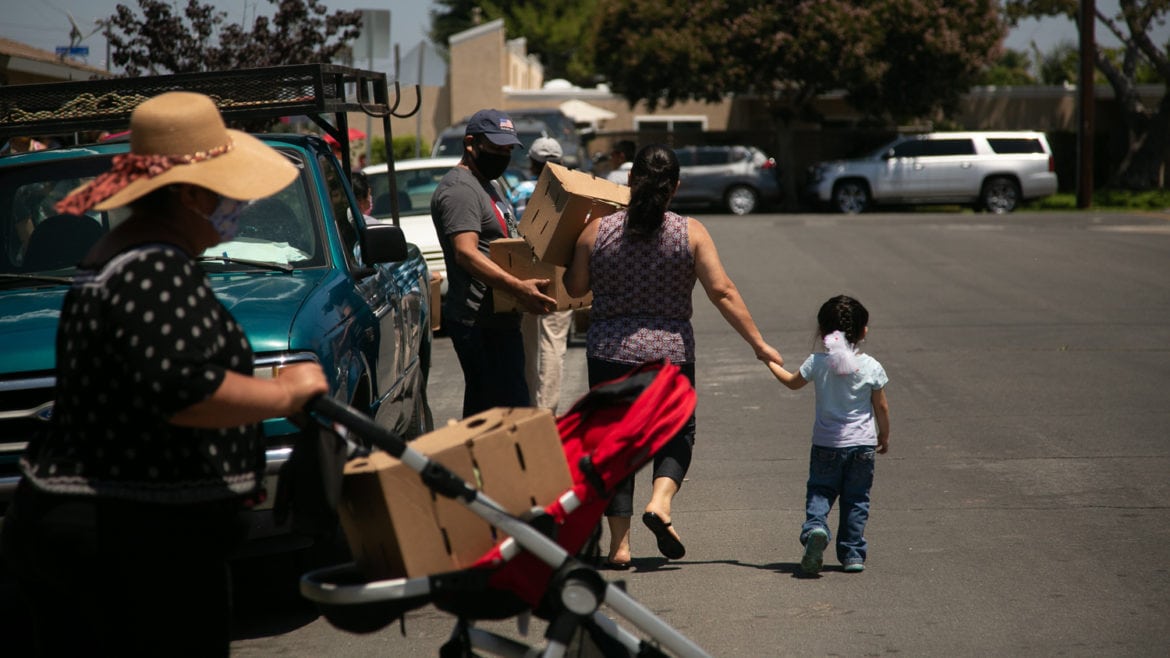 Food drive in the Oak View neighborhood in Huntington Beach on July 17, 2020.

Many of Orange County’s unemployed residents, jobless from the economic fallout of the coronavirus pandemic, are represented not just by a state estimate of nearly 10 percent, but also by the unprecedented demand at food banks.

And it could get worse.

Second Harvest, OC’s largest foodbank, is predicting a 14 percent unemployment rate by the end of the year.

And federal aid to local food banks is shrinking at a time when food demand is high.

Since February, food banks have more than doubled their food distribution.

The state’s Employment Development Department, which is responsible for processing unemployment claims, has been overwhelmed since the coronavirus recession hit shortly after the pandemic began.

“There are many Orange County residents that have filed for unemployment that haven’t received benefits yet,” Herrmann said. “The system that people have been paying into isn’t working for them.”

The backlog of checks and unemployment claims created such an outcry from Californians that Gov. Gavin Newsom ordered a “strike team” to investigate the situation at the employment department.

The team issued a scathing report late last month slamming the department on its handling of the economic crisis.

“This phone number can’t be routed anywhere outside of the in-office desk phone system, so as employees began telework and/or were reassigned to other priorities (e.g. Work Share), they stopped answering the phones,” reads the report.

“This line received on average 6.7 million calls per week during the month of July, representing approximately 600,000 unique callers.”

There’s a current backlog of over 450,000 unemployment claims as of last Wednesday, according to data from the employment department.

Investigators also found employees in that office would refer people to another call center, which couldn’t help them, and the calls would come back to the Northern California office in an attempt adjust their unemployment claims.

“The net effect is that 600,000 unique callers a month are waiting on hold for hours without a statistically significant chance of being served,” the strike team found.

Some people have yet to receive checks.

“There are hundreds of thousands of claims sitting out there. My son is one of them, by the way, who filed for unemployment and is reflected as funded on the website or approved, but has yet to see a check come in,” Herrmann said.

The strike team also found the unemployment department manually processed a large portion of claims, which caused a severe delay in getting checks to unemployed people.

“[The unemployment department] received an average of 60,368 new electronic claims each day during the week ending August 22, 2020. Of those, an average of 40% were routed for manual processing: 24,147 manual claims per day. Once you require manual processing, you cannot have your claim determined in under 21 days,” reads the report.

Yet Newsom hasn’t discussed the report much or held a standalone news conference on the issue.

The report was also dropped on a late Saturday night, Sept. 19.

Newsom’s approach was slammed by the Sacramento Bee’s editorial board.

“The failures are hardly surprising. The coronavirus pandemic is testing all of our systems in unprecedented ways. Newsom may not be responsible for the EDD’s lack of preparedness, but he is responsible for fixing the mess. His attempt to bury the report does not inspire confidence,” the editorial board wrote.

“Californians deserve better. Newsom should hold a press conference specifically to discuss the findings of the EDD report. Ideally, he would schedule it for a weekday morning instead of a Saturday night.”

Meanwhile, the virus has killed 1,360 people out of 56,283 confirmed cases, including 19 new deaths reported today, according to the county Health Care Agency.

The exact date of those new deaths can stretch back up to two weeks because of reporting regulations.

There were 165 hospitalized, including 60 in intensive care units as of Wednesday.

Nearly 964,000 tests have been conducted throughout OC, which is home to roughly 3.2 million residents. Some people, like nurses and doctors, get tested numerous times.

Herrmann said people who have been getting unemployment checks since they were first laid off when the pandemic started will begin losing that money in December.

Stephen Reifenstein, an OC resident, started getting unemployment checks in late April, a couple weeks after he lost his job. Unemployment terms out typically after 26 weeks, but due to the pandemic there is a 13 week extension.

Reifenstein said searching for jobs has been a hit or a miss.

“I had somebody at one point in time offered me a job and then I accepted,” he said. “Then I woke up on a Monday morning with messages from the guy saying the budget got pulled and the job is not happening anymore.”

Herrmann said there is also an issue with people being underemployed like hospitality workers working less shifts because of the pandemic and in turn making less tips.

“That’s a significant population, because they’re being counted as employed. But they’re at risk and if they had savings, those savings are now obviously dwindling, because they don’t have the income to offset that,” Herrmann said.

Roughly 8,700 — possibly more — Disneyland resort workers are expected to be laid off, and the multibillion dollar global entertainment giant just reached an agreement with 11 unions to bring back laid off workers once the resort opens, according to the OC Register.

Herrmann said federal virus relief efforts have become too politicized and current food support will dwindle by the end of the month.

“We have dysfunctional leadership that has made this a partisan issue,” Herrmann said. “At the end of October, that’s it.”

“Stimulus has gone, small businesses are starting to close, unemployment support is starting to run out. What are these people going to do?”