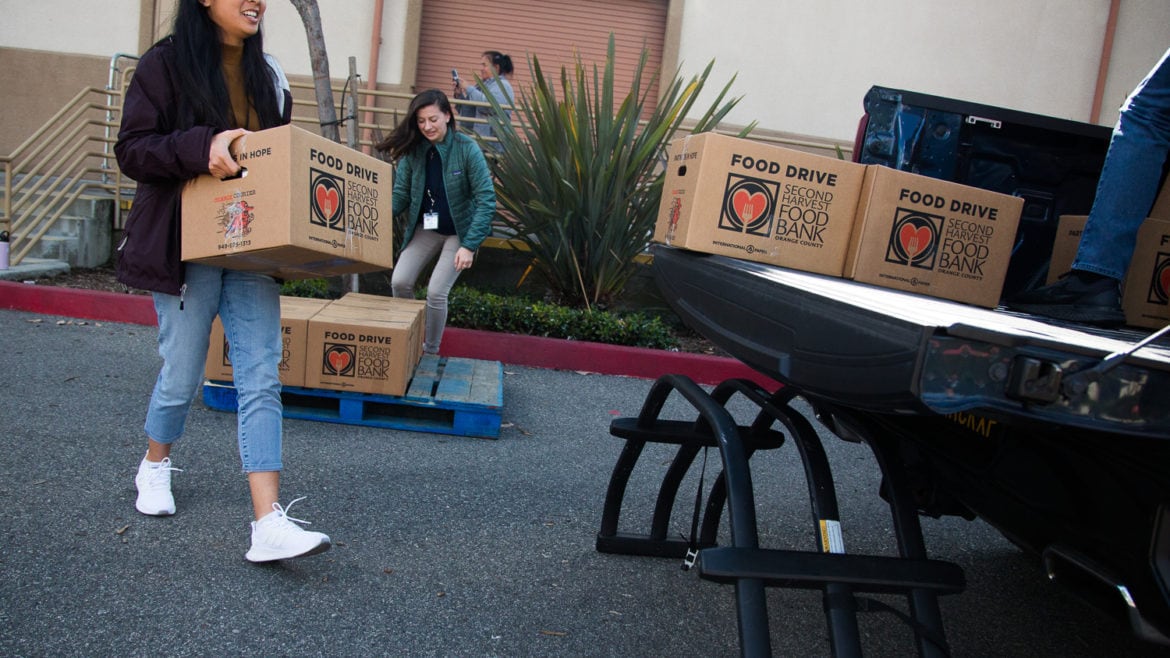 Volunteers load a pickup truck with a box of donations from the Second Harvest Food Bank of OC in Irvine, on Tuesday, March 17, 2020.

As unemployment numbers reach new heights in Orange County so does the need for food.

The County food banks and their network of pantries, houses of worship and even some businesses have been working nonstop to help serve food to millions of people in the County over the last 6 months.

Food banks and food pantries responded quickly after many people lost their jobs to stay at home orders back in March. As food insecurity increased with the consequences of the pandemic their efforts to feed people adapted to meet the needs of the community.

Food bank and pantry leaders have told the Voice of OC that the next few months is when demand for food is the highest in the year.

Now as their teams start to feel a little fatigued from months of work, Second Harvest Food Bank and the county’s food pantry network are bracing for a new set of challenges and what they project will be a shortfall of food starting in November.

“Unemployment has a 39 week life cycle and all of those residents that started to file for unemployment in March, and in April, those actually term out in November and December,” said Second Harvest CEO Harald Herrmann.

Nearly 200,000 people out of work across Orange County and that number is increasing.

“We also think there’s another round of layoffs coming and that there’s more shrinkage coming in terms of jobs. That’s not good. It’s coming at a time when other resources just won’t be there so we’re concerned,” Herrmann said.

Stephen Reifenstein, an Orange County local, lost his job in April and started to volunteer at Second Harvest’s food distribution at the Honda Center when it was open. His wife Kristina who is also not working because of the pandemic would pick up food from the pantry to help feed their family.

The Reifensteins said they’re lucky they haven’t had to fear where’d they get food from because of the food bank, their savings and support from friends.

“The fear is there for the future if things don’t change. We’re rationing and making sure that we take care of what we have and not waste any food,” Stephen said.

“If he continues not to have a job and the pandemic continues further, then neither of us can work, then that’s when it’s going to probably pick up depending on how long employment goes,” Kristina said.

It’s not just unemployment which Herrmann and his team project to be at 14% by the end of the year but also USDA food shipments and stimulus money for food insecurity are ramping down despite the demand. Food costs are also increasing.

Andre Roberson the executive director of the Power of One Foundation said that while they still receive USDA shipments, which they are grateful for, it is not as much as they were receiving in the past. The program has now entered its third phase.

“Phase two and phase one provided a lot more options and food variations for families versus now in phase three, everything is combined into one box and the boxes are bigger, they’re also heavier. There’s also a lesser amount of boxes that comes on a pallet,” Roberson said.

Multiple pantries in the county are using the program as a source for getting food.

Bandana Singh, a spokesperson for the Sikh Center of Orange County’s food pantry, told the Voice of OC that they too had been helped by USDA food shipments and have had difficulty getting food these past few weeks.

“The need is definitely there. We did not expect that in five months, we would serve 1 million meals,” Singh said. “We’ve had volunteers drive out to Central California, just to pick up a load of some food. We just make it work, but some weeks are harder than others.”

Singh said if they purchase food it’s through their own fundraising efforts and that they have been helped by companies and people who donate food regularly to the pantry.

“The goal is to make it a community project. We want everyone to feel ownership. We want people to be involved because we want to keep it going. The need is there and now it’s just a matter of how to keep this going,” She said.

Second Harvest has operated off their own fundraising for months at the start of the pandemic before they got government aid. Herrmann said to prepare for the shortfall they’re buying food and raising money.

He said that the food bank is looking to raise around $2 million for food which he is confident they will do to cover the food demand between October and June of next year. He added that since the pandemic started donors have stepped up to help make the people who need food get to eat.

“Unemployment is going to be with us for 18 to 24 months and so we’re in this for the long haul but we will get the job done that we were very clear on. We’re confident that we’ll meet the call and that we will be there for these for these families in our community in the months ahead,” Herrmann said.

For anybody in need of food, pantries across Orange County are handing it out for free.

Power of One Foundation

Every Thursday and Saturday from 8 -11 a.m. at IKEA in Costa Mesa for Curbside pickup.

If you operate a drive through food pantry in Orange County and would like our newsroom to be aware of your efforts, reach out to Hosam Elattar at [email protected] or on Twitter @ElattarHosam.