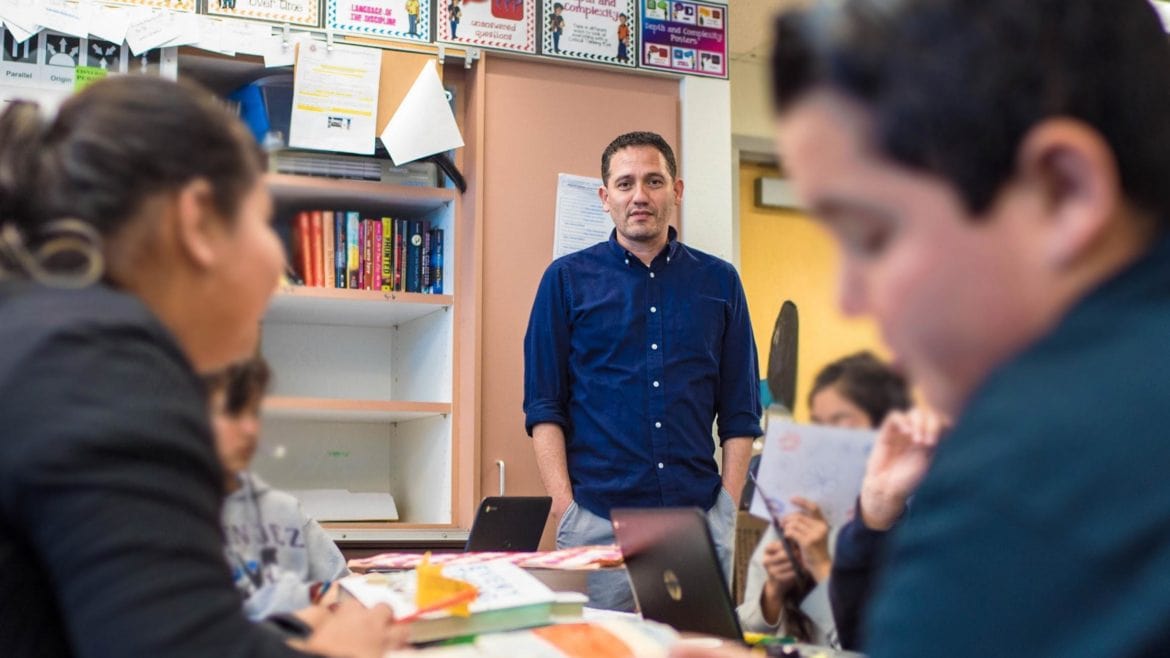 Ernesto Cisneros is pictured in his classroom at Mendez Fundamental Intermediate School in Santa Ana. He teaches reading and writing to middle school students and is the author of “Efrén Divided."

The boy’s name is Efrén, and he’s the oldest of three children in his family.

His undocumented parents work hard, and even harder to make ends meet.

And then one day, agents arrest Efrén’s undocumented mother as she seeks factory work.

“We have to get her back,” he vows, even crossing the border alone to find her. 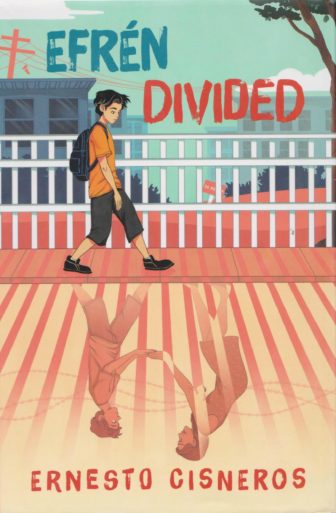 This is the story that unfolds in “Efrén Divided,” a novel by Santa Ana teacher and resident Ernesto Cisneros published in March for children, but with insights for adults, too.

Along the way, the middle school student at the center of the story learns about himself, as well as the power of friendship, of community and of his family’s love.

“He learns that he has a world of allies by his side, watching over him, making sure he is safe,” Cisneros said.

Cisneros’s two children were in middle school as he was writing the manuscript in 2016. It took about four months to write the book, about two months to revise it and about two weeks to find a publisher after he had shared it with his agent. Cisneros had been struggling for 14 years to get any of his work published.

“I just wanted Santa Ana kids to see themselves on the pages of a book,” he said.

Inspired by His Students and Community

He credits teacher Sharon Saxton at Santa Ana High with introducing him to the first book he connected with, “The Moths and Other Stories” by Helena Maria Viramontes. That led him to many others, including Sandra Cisneros and Gary Soto, as well as leading authors who wrote cover blurbs for “Efrén Divided,” including Fred Aceves, David Bowles and Angela Cervantes.

“As a student, I grew up with a sense of disentitlement, a feeling that I was not entitled to the same opportunities as everyone else simply because of the slight accent in my voice,” Cisneros said. “I want every single student to know that they, too, can be anything they want, including authors.”

The idea for the book came from his experience in the classroom, after three of his students had a parent deported.

“Their strength and resilience were inspiring,” he said. “I felt obligated to speak up and help raise awareness of their plight. But above all, I wanted them to know that they aren’t alone in their struggles, that they have a multitude of allies fighting alongside them …. With their trust came a sense to do something to help. Giving a voice to their struggles wasn’t something I could turn my back on.”

The fault lines that spread among Americans during the last presidential election were a factor in his decision to write the book.

“What had always been an underlying bias against the Latino community began to feel like an all-out attack,” he said. “I knew that I needed to do something to help change the narrative created about us, especially in the hearts of today’s youth. I didn’t want Latino children internalizing the hate. Instead, I wanted them feeling pride over their heritage.”

Finding an Audience, Despite the Pandemic

The novel was released as COVID-19 deaths and cases were accelerating across the United States, leading to the cancellation of promotional events, including an expected full house at Santa Ana High’s auditorium. 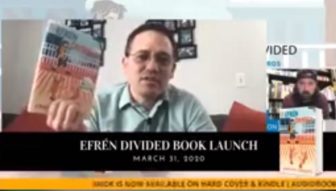 “Efrén Divided” was launched in March 2020. In person readings were replaced by online events.

Nevertheless, the book has received starred reviews from Booklist, Publishers Weekly, the School Library Journal and Kirkus Reviews. “Debut author Cisneros paints a vivid and palpable #OwnVoices picture of the lost childhoods as children and parents are separated due to immigration issues,” Kirkus said. “Honest and tender: a must-read.”

The book has landed on several reading lists, including Indies Introduce/Next Pick from the American Booksellers Association, Amazon Best of 2020 So Far and Project LIT, which promotes diversity. “Efrén Divided” was one of two books recently honored by the California Independent Booksellers Alliance with a Golden Poppy Award for best Middle Grade book of 2020. It’s aimed at a tween, middle-grade audience.

Linda Sherman-Nurick, who owns Cellar Door Bookstore in Riverside, met Cisneros last year at a trade show for independent bookstores, and had been planning a reading with Cisneros when the pandemic struck.

“The story of how this book came to be was completely compelling,” she said. In a description for her clients, she calls the book “a gift to parents, to educators, to children who in seeing the ‘issue’ of immigration through the eyes of a middle school kid may finally understand the depth of the crisis.”

Cisneros said he finds the praise a “dream come true.”

“I never thought the publishing industry would ever embrace the story of an immigrant family in this way,” he said. “However, the part I cherish most is hearing from teachers across the country, thanking me for writing a story for the children in their classrooms – those like Efrén.”

Writing in Pride for Santa Ana

Cisneros, who received a bachelor’s degree in English at UC Irvine and an MFA in creative writing from National University, is a member of the Society of Children’s Book Writers and Illustrators, as well as a founding member of #LatinxPitch, a group of authors who seek to raise voices and representation in children’s literature. A rising tide in the publishing world is the #OwnVoices movement, which refers to writers from under-represented groups telling their stories.

“Initially, ‘Efrén Divided’ was written specifically for every Latino child who has ever been made to feel lesser than anyone else simply because of the color of their skin,” Cisneros said. “I wanted them to see the beauty in their culture, their history, themselves.”

The novel doesn’t spell out that it is taking place in Santa Ana, but a number of place names, as well as the names of teachers, hint at it taking place in the city. Cisneros seeks to strike a balance between the interests of those readers who live in the city, and those who don’t.

“I made sure to add plenty of ‘Easter eggs’ for the children living in Santa Ana,” he said. “While the characters are not based on real people, you will definitely see a lot of familiar names and locations throughout the book .… As much as I wanted all the children of Santa Ana to feel a sense of pride at seeing their city named in the book, I knew that there were many more children living in other cities similar to ours. I wanted them to feel like they, too, were being depicted in the story.”

Conversations among the main characters in the book integrate a generous amount of Spanish, but a 12-page glossary makes the language accessible to English-speakers.

“Being Latino, I have always used both languages in my daily life,” Cisneros said. “It’s part of my culture and a sense of pride for me.”

The release of his book came just two months following publication of “American Dirt,” which tells the story of a Mexican mother’s effort to cross the border with her young son. Some critics have called it stereotypical, and questioned its high-profile promotion when the writer is but one-quarter Puerto Rican.

Cisneros says he’s fortunate to be working with HarperCollins Publishers’ newest imprint, Quill Tree Books, which focuses on developing a diversity of writers and illustrators.

“I’ve learned that the publishing industry is now beginning to see how impactful and marketable diverse books can be,” he said. “However, I have many Latino author friends who still receive minimal advances and minimal backing behind their books. In a sense, many of these books are not successful because the publishers themselves are not willing to invest in them …. Like many authors before me, I’m hoping that ‘Efrén Divided’ can help pave a wider path for other authors of color.”

Cisneros hopes that any reader, regardless of background, would identify with the universal values encompassed in Efrén’s story.

“Efrén’s world will certainly not align with that of every American, but I’d like for every reader to focus on the similarities rather than the differences between us. I am sure there is a bit of Efrén in everyone – a part that loves their family and friends and would sacrifice all they have for them. Along with that, I hope they are sympathetic to the plight and struggles of others who share those same dreams. After all, America itself is founded on the dreams of immigrants.”

How would he, without giving it away, describe the book’s ending?

“Realistic and hopeful,” Cisneros said. “One that will inspire young people to activism in their communities.”

Ron Gonzales is a contributing writer for Arts & Culture at Voice of OC. He can be reached at [email protected].