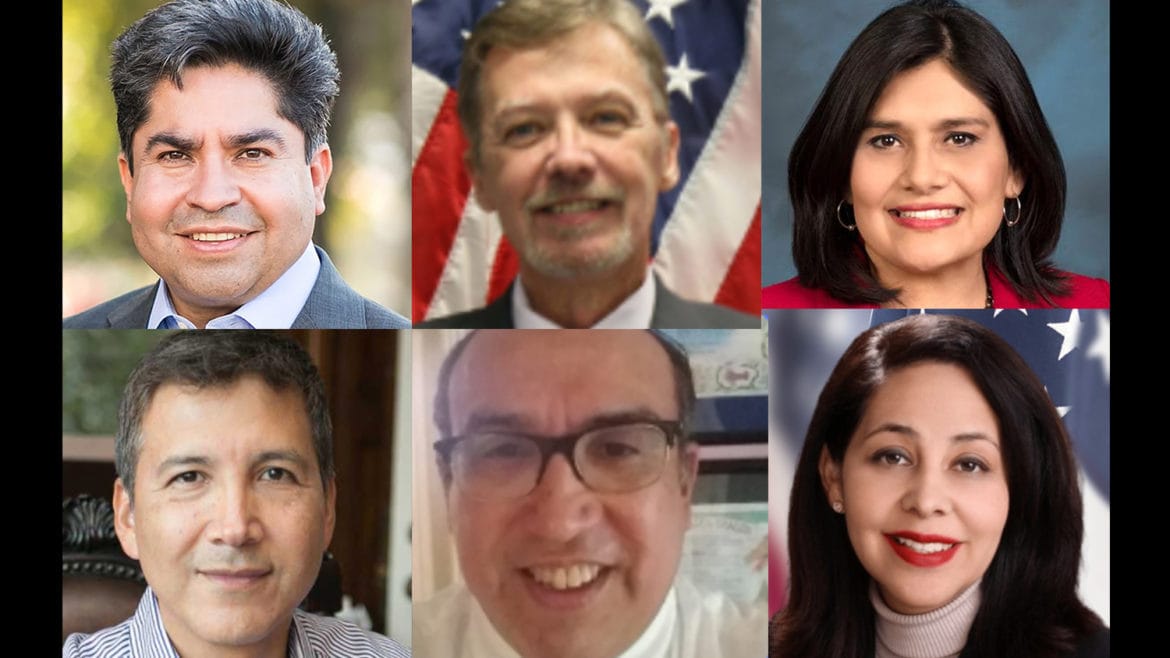 When Mayor Miguel Pulido first assumed his current office in 1994, one of his present-day council colleagues was still in high school.

Another was starting kindergarten.

Now, more than two decades later, Pulido’s termed out after winning every single one of his reelection bids since. In 2012, voters approved a limit of four two-year consecutive terms for the seat, meaning he couldn’t run for reelection this year.

Seeking his open seat, which is elected at-large, are six candidates — some of them current politicians on the dais, others newcomers or returnees.

A year during which three other City Council seats plus the mayor’s are up for election will, after November, determine who has the power at City Hall.

During a Sept. 17 virtual forum — hosted by civic engagement group Connect-to-council and moderated by Voice of OC Editor-in-chief Norberto Santana, Jr. — mayoral candidates sounded off on prominent issues this year around special interests, law enforcement reform and the political grip of the city’s police union, for-profit development in the city and the campaign money tied to it, as well as housing and homelessness, among other topics.

Here are the candidates:

Chief among the issues facing Santa Ana residents are continued calls to reassess the city’s system of policing and law enforcement as activists continue to demand a reallocation of money away from the heavily-funded police department and into other programs.

Asked whether each candidate would increase the police budget, if elected, in future fiscal years, only Sarmiento and Iglesias said “No.” Solorio, Lopez, Collins, and Alvarez all said “yes.”

Asked if they would be in favor of civilian oversight over the city’s law enforcement, Solorio said “the City Council is oversight,” Sarmiento, Iglesias and Collins said “yes,” and Alvarez said she supported oversight but “advisory only.”

All of the candidates agreed the city was carrying an undue burden of Orange County’s homelessness crisis, and called for increased efforts to stand up to county officials and demand they look to other cities — especially in south county — to step up.

Another issue is the affordability of housing in one of California’s densest cities. Recently, the City Council voted to relax Santa Ana’s affordable housing policies to make it easier for developments to spring up.

Sarmiento was the only one the night of the forum who said he supported requiring more affordable housing in the city. The other candidates said they did not.

When queried if they would support further renter protections like a just cause eviction ordinance, Collins, Lopez, and Sarmiento said “yes,” Alvarez and Iglesias said “No,” and Solorio said “No, rent control and proposals like that don’t work.”

A question about special interests at City Hall yielded a variety of answers from each of the candidates over their assessment about which ones posed the largest risk to the integrity of city affairs.

Solorio said “there’s always going to be special interests … whether it’s the special interests of city groups, individual businesses, chamber of commerce, parent teachers associations, commissioners, staff — our important role in the City Council is balancing out those interests.”

He said there’s a need to “add a little more transparency and process to how things happen at City Hall.” He added he was among a few dissenters earlier this year on a decision by a council majority to disband a number of city committees amid a request by the city’s police union to dissolve a committee that opposed two council members, including Iglesias, who sat on it.

Solorio is expected to have the backing of the police union, one of the biggest spenders in citywide elections since 2016. Asked whether he’d accept the endorsement, he said he’s supported by a number of different labor groups.

Meanwhile, Sarmiento — despite being backed by the police union at one point and voting for controversial raises for officers in 2019 — has become more and more vocal about his opposition to the police department being prioritized year-after-year in the city’s budget.

This year, he voted against a budget that increased police department spending by $3 million and has explicitly said he won’t accept the union’s support this year.

“I want to be autonomous and independent and make decisions unfettered and unbiased,” Sarmiento said, adding he instead wants to push issues like helping immigrants “both documented and undocumented and increasing affordable housing.

“Those are issues that really involve the residents of our town – it doesn’t benefit the private, big sector of our folks,” he said.

Iglesias laid the special interest issue squarely on labor groups in the city, namely the police union: “They have a stronghold on our City Council, a stronghold on what’s happening at City Hall and that’s something that needs to stop.”

She voted against police raises last year, and later publicly battled with the union until a recall effort financed mainly by the union ousted her in favor of current Councilwoman Nelida Mendoza.

Iglesias said “no” to a police union endorsement, Lopez said he supports them “but not needed,” Collins said “if they accept my proposal for change, yes, other than that, no” and Alvarez said “yes.”

She and Solorio were among the most staunch supporters of a much-contested apartments project at 2525 N. Main St., a proposed development that incumbent Councilman Juan Villegas publicly tied to more than $320,000 in illegal dark money spent on the 2018 city elections.

Sarmiento was initially supportive of the project, but when it became clear the apartments would go before voters in a referendum after a successful effort by residents, he flipped on it, later followed by Councilman David Penaloza, consolidating a majority to kill the proposal. Iglesias also voted against the plan once the majority against it became clear.

Alvarez agreed special interests were an issue. “Historically, for the last eight years, we have seen a rise in people playing politics. It’s not just the (police union), its others … developers are in a sense being held hostage – just follow the money and follow the votes.”

She continued: “Some of the (developers) are even being told, ‘If you give me this money it might go your way,’ or ‘I’m not going to vote for this, I’m going to continue it unless you contribute to this particular committee.’ The concern should really be who is getting elected … there’s a briber and bribee … it’s not just the dark money – follow the committees.”

Lopez said special interests are there “every day … it’s been out of control right now, especially with the last police recall election. My interest is the citizens of Santa Ana — that’s the interest I want.”

Collins pointed to his past routine of filming council meetings and study sessions where “money was being given away.”

“It’s not so much that special interests are the issue. There will always be special interests. It’s whether they are able to influence officials’ stance on an item,” he said, adding it comes down to changing leadership “at the very top” and getting “fresh blood” on the council.