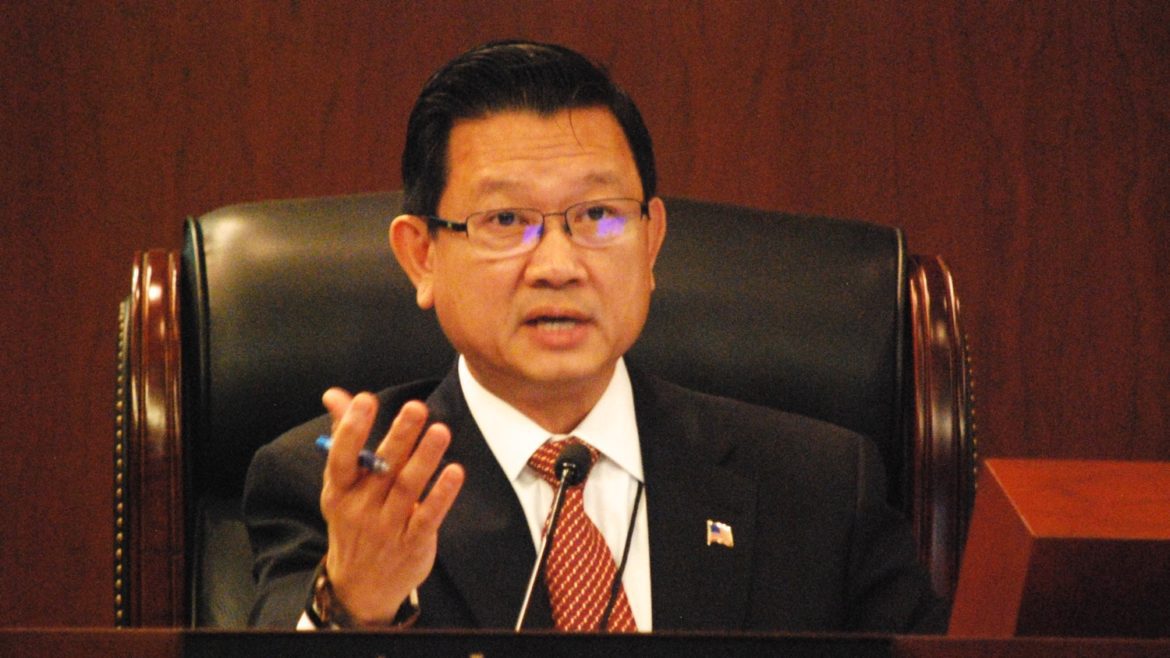 Supervisor Andrew Do at an Orange County Board of Supervisors meeting.

State authorities closed a money laundering investigation into Orange County Supervisor Andrew Do and the county Republican Party with no enforcement action, finding “insufficient evidence” of any violations.

“After conducting our investigation and review of the matter, there is insufficient evidence to support a finding that respondents violated the Act. As a result, we are closing this matter without further action,” California Fair Political Practices Commission (FPPC) staff wrote in an Oct. 23 letter to the party and Do’s campaign.

Do has denied the allegations as false and politically motivated. He has said the complaint was lodged by someone who lives with a campaign worker for his election opponent, Sergio Contreras, and that no money actually came into his supervisor’s campaign account.

“It was an unfounded, politically motivated complaint. And the FPPC said it was unfounded,” Do’s treasurer, Lysa Ray, told Voice of OC on Friday.

Do and Fred Whitaker, chairman of the Republican Party of Orange County, didn’t return seeking comment on the FPPC’s closing of the case.

The complaint, by Mario Angeles Jr., alleged Do and the county GOP illegally steered over $22,000 last month to Do’s campaign through the Orange County Republican Party without disclosing the true source.

The FPPC found insufficient evidence that any laws were broken.

“Without commenting on this or any specific situation, all complaints (if that is how a case starts) are taken under review to determine whether there’s merit to indicate a potential violation,” he added. “If so, then an investigation is opened to determine if, in fact, there were/are violation(s).”

The complaint to the FPPC alleged Do moved $24,000 from an account he controls that can take unlimited contributions, to the county Republican Party, which then appeared to report contributing $22,326 to Do’s supervisor campaign two weeks later.

But while it looked like the $22,326 was transferred from the party to Do’s supervisor campaign, the full disclosures indicate the party actually spent it on communications to party members in support of Do.

The amount the party reported spending on communications for Do was 6.98 percent less than the amount Do transferred to the party. That’s almost exactly the same amount as the 7 percent Do’s current chief of staff wrote in 2010 would be kept by the Ventura County Republican Party in a separate money laundering case involving a different candidate, for which the FPPC issued a $40,000 fine for.

Under state campaign finance reporting rules such “member communications” are reported as contributions by the party, even though the money doesn’t go to the candidate’s account.

One of the largest money laundering fines statewide in the past few years was in a case involving Do’s current chief of staff.

Do’s chief of staff since early 2017, Chris Wangsaporn, was state controller candidate Tony Strickland’s chief of staff at the time of the laundering and kept Strickland informed of plans to run about $37,000 of the donations from an oil and gas businessman through the Ventura County Republican Party to Strickland’s campaign, according to emails obtained by state investigators.

Wangsaporn and Ray, who was Strickland’s treasurer, declined to cooperate with the state investigation into the laundering and blew off interviews they were subpoenaed to appear at, according to state authorities.

“Strickland, Wangsaporn and Ray did not cooperate with the investigation of this matter,” according to the final investigation report from the California Fair Political Practices Commission.

“Strickland, Wangsaporn and Ray were subpoenaed for interviews with the Enforcement Division on November 19, 2014. None appeared, and their attorney failed to respond to telephone and email inquiries regarding the interviews.”

Ray, when contacted for comment Wednesday, said she didn’t know the money was being laundered and that treasurers are always named as defendants in such cases.

“Treasurers are always named in everything,” Ray said. “I certainly wouldn’t have accepted earmarked money.”