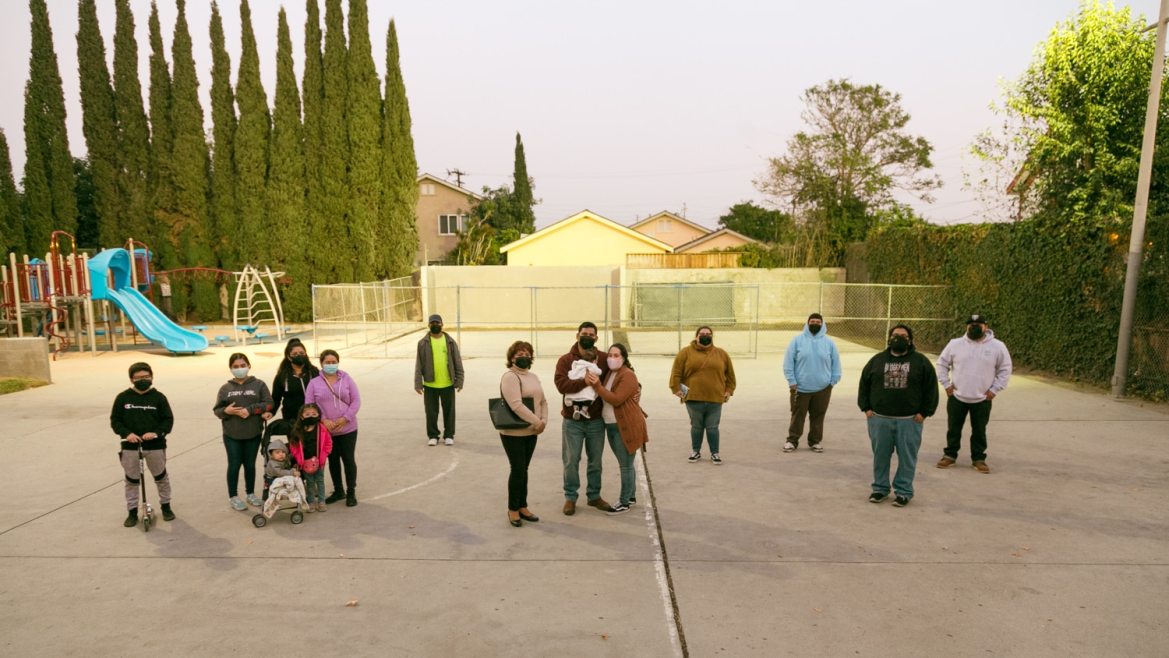 Logan neighborhood residents stand in front of where the handball courts at Chepa's Park used to be.

American handball is a straightforward sport, popular in urban areas and requiring much hand-eye coordination and physical skill.

In Santa Ana, the game has landed center stage in a citywide debate over balancing youth engagement and public safety.

Officials’ decision this year to tear down handball courts in Chepa’s Park, near the longstanding Logan Neighborhood, has roiled some in the community with fond childhood memories of matches and tournaments at the recreational space — activities that they say kept them on the right path.

Those who wanted the courts taken down, on the other hand — namely city officials and residents of the park’s surrounding, historic barrio — argue they had since become hotspots for drug use and gang activity.

This dispute, a community petition to bring the courts back, and plans to tear down more at another park, have come to symbolize the ongoing conversation over what public safety in Santa Ana looks like and whether it’s affected by a lack of adequate spaces — in a park-poor city — for children to play the sports they want to play.

Growing up, Santa Ana resident Isaac Manzo said he was considered an “at-risk” youth: “I wasn’t on the right path.”

That was until a local community leader named Nick Alvidrez started the first handball club at Chepa’s, which Manzo said kept him occupied and out of trouble up to when he graduated high school, and later, college.

But eventually, in the early 2000s, Manzo said Alvidrez wasn’t able to continue the club, leaving what Manzo saw as a gaping community hole. It ate at him enough to where he started another in 2014: “The Rookie Handball Club.”

It attracted kids from different neighborhoods, from across the city, he said. They would play at Chepa’s Park and at different nearby schools.

“It got the kids in better shape, and most importantly, steered them away from bad paths,” Manzo said, adding the long term plan was to introduce kids who played to opportunities outside the city’s borders, by taking them to the recreational fields of different colleges and university campuses “to show them what was out there.”

But such an opportunity didn’t last long, he said. The courts were taken down in September.

Resident Leonardo Penilla, another proponent for keeping the courts at Chepa’s, has since launched an online Change.org petition to rally local support for returning the recreational area to the community.

“We have already discussed this with the Santa Anita Neighborhood Association and they supported the renovations,” he added.

City officials maintain the Chepa’s Park court removals came at the request of homeowners in Logan, one of the city’s original Mexican barrios with roots extending back to the late 1800s, according to the Santa Ana Historical Preservation Society.

Those  in favor of taking the courts down claimed the area was increasingly drawing undesirable activity.

“According to many members of the community, the handball courts in recent years had been known for and used for many different types of activities other than handball,” said Councilman David Penaloza, speaking to Voice of OC. “Many of them were illegal activities: Drug use, drug exchanges, sexual and illicit activities, and (homeless) camping.”

He added “it was the neighborhood and community push that led to their demolition.”

Handball court advocates who spoke with Voice of OC disputed this, saying it was the lack of a police presence and security — not the courts themselves — that drew shady characters to the area.

The effort to take down the courts was driven by the family of Chepa’s Park’s namesake: Josephine Andrade, a community activist who was known as “La Reina de la Logan” or “Queen of Logan” and “Chepa” until she died more than a decade ago.

Andrade’s family had made several pushes to get the courts taken down before.

“Sure you had some people there who were okay,” said her son, Joe, in an interview. “But we wanted to make the park into a more family oriented park. It’s not a large area.”

He said for years, the neighborhood has successfully staved off gang activity, adding it was that continued effort, coupled with his mother’s legacy and the fear that the courts were being used as gang meetup spots, that drove his push to get them taken down:

“We’ve never had a gang in this neighborhood, and we’ve kept them out.” 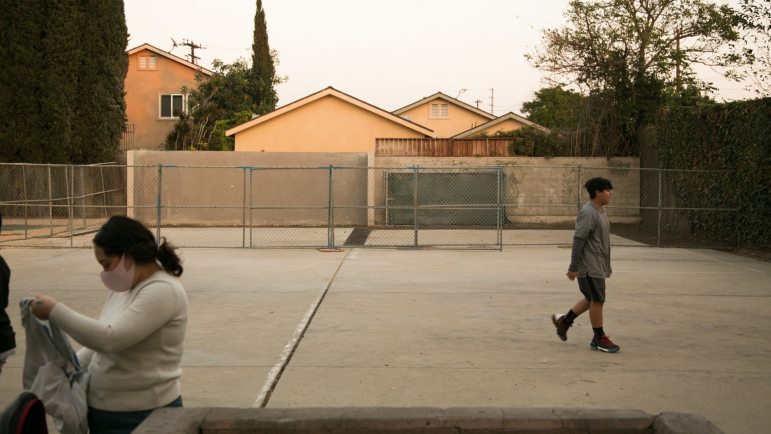 Fences stand where the handball courts once stood at Chepa Park in the logan neighborhood in Santa Ana. Dec. 11, 2020.

Penaloza said if the courts were taken down to be replaced by some type of development, it would have been more of a problem for him.

“But what we’re doing is tearing down the courts and giving kids additional green space and a seating area for parents to watch their kids. Right now there isn’t one,” he said.

Dolores Almaraz, an activist with Mujeres Migrantes en Progreso and one nearby resident living in front of La Chiquita restaurant, was opposed to tearing down the courts.

“A lot of youth and adults come to enjoy and play, even grandparents bring their grandkids to show them where they used to play handball,” Almaraz said. “Currently in Santa Ana, there are not enough recreational spaces for youth.”

Councilwoman and activist Jessie Lopez said she only learned about some residents’ push to bring back the handball courts at Chepa’s when asked about it by Voice of OC, but added it’s an interesting way to look at the public safety debate in Santa Ana.

“Physical activity is vital to the holistic development of young people, and when we talk about public safety, we always seem to emphasize on crime and I think the conversation needs to pivot to crime prevention, how does that happen?” she said.

One way, she said, would be to “prevent youth from losing interest in sports and other outlets by making sure those are adequately available in our communities.”

“It’s a smart decision, because handball isn’t just about physical development and wellbeing but also about mental development, it builds community,” she added, also looking back to her formative years where she said she saw “people of all ages” play handball at nearby parks.

Manzo said that as a kid, “going out of my Barrio was intimidating.”

“Through handball, I was able to graduate college, get my masters, and wanted the same for these other kids. For them to take down the courts — it’s a whole part of my life gone. The kids, it’s the same thing, they’re taking the opportunity away from them,” Manzo said.

Penaloza said he’s open to providing more handball areas for kids if he sees a vast call from the community for it, but that the courts need to be reconfigured to be less obscure — serving less as a place for people to hide from public view — and be brought more out into the open.

Almaraz said handball provides the city’s low-income kids a cheap way into sports, and that it’s a needed asset for residents’ quality of life citywide.

“I hope the city can support us,” she said.