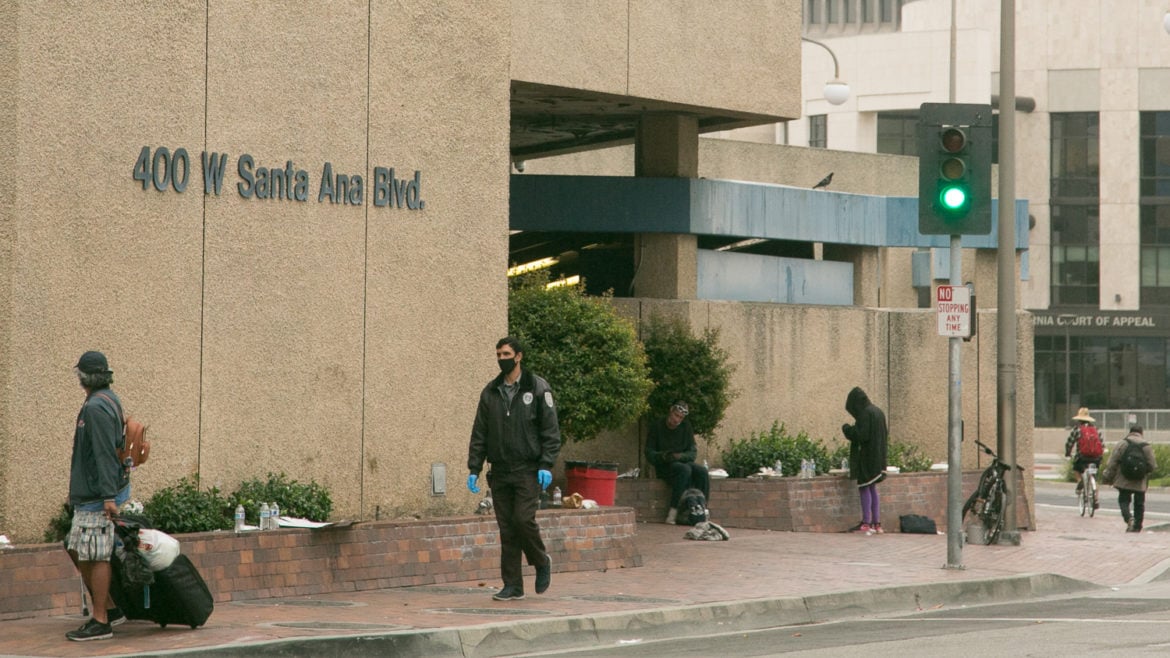 The county's Courtyard homeless shelter in Santa Ana on June 23, 2020. It's unclear if there's been coronavirus outbreaks at the shelter.

Coronavirus outbreaks are tearing through Orange County homeless shelters as hospitals are treating a tsunami of virus patients after a series of record-breaking daily case increases.

“Over the last week, there has been a significant increase in COVID-19 positive individuals at congregate shelter locations,” reads a Tuesday memo from county health officer Dr. Clayton Chau to OC Board of Supervisors Chairwoman Michelle Steel.

The memo lists numerous outbreaks, but doesn’t say which shelters are being hit.

“There are currently ongoing outbreaks (defined as 3 more cases within a 2-week period of time) in 16 shelters in Orange County. In the past two weeks, 118 persons experiencing homelessness were confirmed COVID-19 positive,” reads Chau’s memo.

The current outbreaks are hitting homeless shelters harder than the first wave.

“This is a considerably higher number of shelter outbreaks than we have seen previously, including during the summer surge when the most active outbreaks at any time included seven shelters,” reads the memo.

County officials worked with city officials in Fullerton to boost the number of shelter beds at the Fullerton Navigation Center for virus-positive homeless people, which are slated for isolation to help prevent the virus from spreading, according to the memo.

As of Wednesday, 1,854 county residents were hospitalized, including 394 people in intensive care units, according to the county Health Care Agency. A week ago, 1519 people were hospitalized.

The daily increases are happening even as hospitals are discharging as many stabilized patients as possible in an effort to free up beds.

The county has broken hospitalization records every day since Dec. 2, after surpassing July’s highpoint of 722 people hospitalized in the first wave.

Except when the July peak hit, average daily cases were decreasing. In mid-July, OC’s daily average number of new cases was just over 900, using a rolling seven-day average.

State public health officials estimate about 12% of all new cases end up in hospitals two to three weeks down the road.

The onslaught of new virus patients has forced some Orange County hospitals to curb their non-emergency procedures to free up staff and beds.

The situation has deteriorated to the point where county health officials are forcing hospitals to take ambulance patients, even if their emergency rooms are full.

The trends are alarming public health experts and doctors across OC.

“The pandemic is all of us — all of us moving around, meeting each other. That’s what spreads the virus,” said UC Irvine epidemiologist Andrew Noymer in a Tuesday phone interview.

“We’ve been setting records in terms of hospital occupancy and the ICUs for some days now,” Noymer said. “One of these days it’s going to crest and start falling. If you bet on everyday increasing, chances are you’ll be successful more days than not.”

Noymer said it’s difficult to predict when the trends will start decreasing and is closely following TSA screening data at airports to gauge how many people are flying for Christmas.

“On the 21st, we were actually just under a million. That’s encouraging, but we’re still seeing a large volume of air travel judging by the TSA screening numbers. That means people are on the move nationwide,” Noymer said. “I’m worried about that.”

It’s already killed more than three times as many people as the flu does on a yearly average.

It’s a difficult virus for the medical community to tackle because some people don’t show any symptoms, yet can still spread it. Others feel slight symptoms, like fatigue and a mild fever. Others end up in ICUs for days and weeks before making it out, while other people eventually die from the virus.

Noymer said the peak might come mid-January, but that’s if Christmas and New Years don’t produce even more cases during the second wave — a spike on top of a spike — like Thanksgiving did.

“My guess based on everything i’ve seen so far is that we’ll peak sometime in mid-January. But that comes with two caveats, the first being is that it’s in all of our hands when it peaks — the die is not cast yet,” Noymer said. And the other caveat is just the overarching thing is that nobody really knows.”

Spencer Custodio is a Voice of OC staff reporter. You can reach him at [email protected] Follow him on Twitter @SpencerCustodio
How can I sign up for a vaccine?