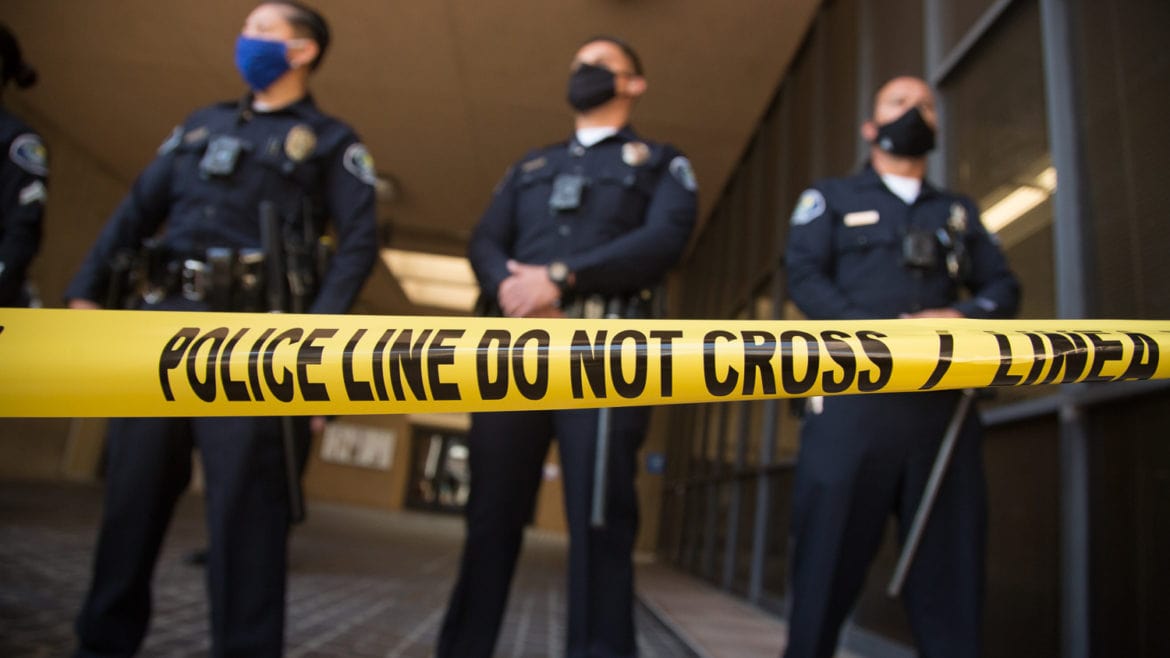 Santa Ana residents are getting a clearer picture of just what kind of oversight and accountability system could be coming down on their police officers, with a fresh batch of newly-elected officials in place to make an eventual — if still far out — final decision.

The latest indication came at a Tuesday meeting, where City Council members heard about real-world examples of what their potential police oversight body could become.

But they seemed to be mixed on whether they wanted a panel with full-on investigatory powers — such as the ability to subpoena key documents — or something with a lesser reach.

Their remarks came after a presentation by city staff, who spent the last several months researching the issue at the council’s request, and those remarks were taken as a direction for the city to do additional research and come back with a more narrow range of options and idea of actual costs.

But the information presented Tuesday night also gave City Hall some idea of what kind of oversight mechanism the public wants to see:

The city surveyed a total of 597 people — nearly 90% self-identified as residents, while the others identified as people who either work in the city or own businesses there —  across a variety of digital and social media platforms.

Staff reported that around 76% of those surveyed didn’t know how to file a misconduct complaint against an officer.

Around 72% either agreed or strongly agreed that police oversight is needed in Santa Ana, while about that same number agreed it would positively affect public safety in the city.

Most respondents answered that an “auditor/monitor” model of police oversight in the city would be most effective.

That model largely focuses on examining broad patterns in complaint investigations into a police department and recommending policy improvements, with the ability to participate in or monitor internal investigations, as classified by the National Association for Civilian Oversight of Law Enforcement.

Coming in second among those surveyed was an “investigation-focused” oversight board, which is the strongest type of model under the national association, involving routine, independent probes of complaints against officers, which could replace or duplicate internal affairs investigations that the department itself typically conducts.

The only difference is that such investigations would be staffed by non-police, civilian investigators. 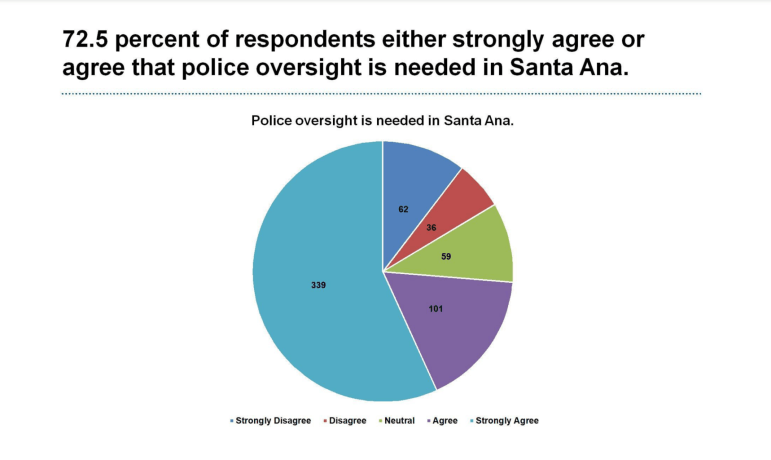 One result of the city’s survey on police oversight.

In last place among respondents was the “review-focused” model, in which an oversight body is largely limited to an advisory role, commenting on and reviewing the quality of police internal affairs investigations, and making recommendations to police department administrators.

Staff said the cost to taxpayers of running a police oversight commission would depend on how much power it has. Generally, staff maintain based on their research of other cities, the more powerful the oversight system is, the more expensive it gets.

City Hall analyst Daniel Soto during Tuesday’s meeting cited Berkeley, which has a police oversight panel with investigatory powers — as well as powers to issue subpoenas — but has an annual operating budget of nearly $768,000, including salaries and benefits for the panel’s three full-time employees.

But Soto also pointed to Riverside, a similarly-empowered panel but only with an annual operating budget of $253,000 because less staff are employed for it.

Nearby Anaheim’s police review board is less powerful — a hybrid of the “review-focused” and “auditor/monitor” models with no subpoena powers — and operates off $125,000 annually.

Councilman Phil Bacerra indicated during the meeting that, like in Anaheim, he was thinking about a system that “blends that review-focused and auditor-monitor model” as “something to look at.”

While he said “I think it’s fair to have civilian oversight to ensure we have a police department that’s on the cutting edge,” Santa Ana’s police force “has not risen to a level of widespread problems other cities may have exhibited.”

He pointed to Anaheim, where the police oversight commission was born out of civil unrest nearly a decade ago over back-to-back police killings of Latinos.

Mayor Vicente Sarmiento, on the other hand, said the council’s best opportunity at an informed decision on police oversight may come ahead of an event like that, a critical boiling point in police-community relations.

“I think you make the best decisions when you don’t have a crisis,” when one can think about “preventing such issues in the future,” he said, adding he would be leaning toward either the investigatory or auditor model.

New Councilwoman Jessie Lopez, who was a favorite among left-leaning progressives this past election, pointed to another city not included in Santa Ana’s research: Oakland, where the commission in place had the power to fire the police chief for cause, as well as issue subpoenas for records.

“I think this is a good start, but I would really like us to go further to match the crisis we are in and look at the Oakland police commission model,” she said. “If we’re going to invest in a new commission, we need a strong one … that model is nationally known and respected.”

Councilman David Penaloza voiced interest in either an auditor-monitor or investigatory model, and also wondered aloud whether the cost of such commissions could be absorbed through money already allocated to the police department when the time comes.

New Councilwoman Thai Viet Phan said while members of an oversight panel would likely be appointed by council members, they could rotate on different issues to maintain a sense of independence or impartiality.

New Councilman Johnathan Hernandez echoed past statements he made voicing interest in a commission that’s “justice-impacted,” meaning a body with members who’ve been in and out of jail or arrested.

The conversation came the same day federal authorities announced a Santa Ana police officer, Steven Lopez, had agreed to plead guilty to a federal charge alleging he accepted $128,000 in bribes from an unnamed crime figure seeking to protect his illegal business activities in the city.

It also came after Voice of OC reported that Santa Ana taxpayers have paid at least $24 million over the last decade to settle lawsuits and legal claims against the police department.

Sarmiento on Tuesday said his hope is that Santa Ana’s oversight system could serve as a model for other cities: “That we become that example, who people say ‘they got it right, they did it well.’”

Whether that will be the case remains to be seen.