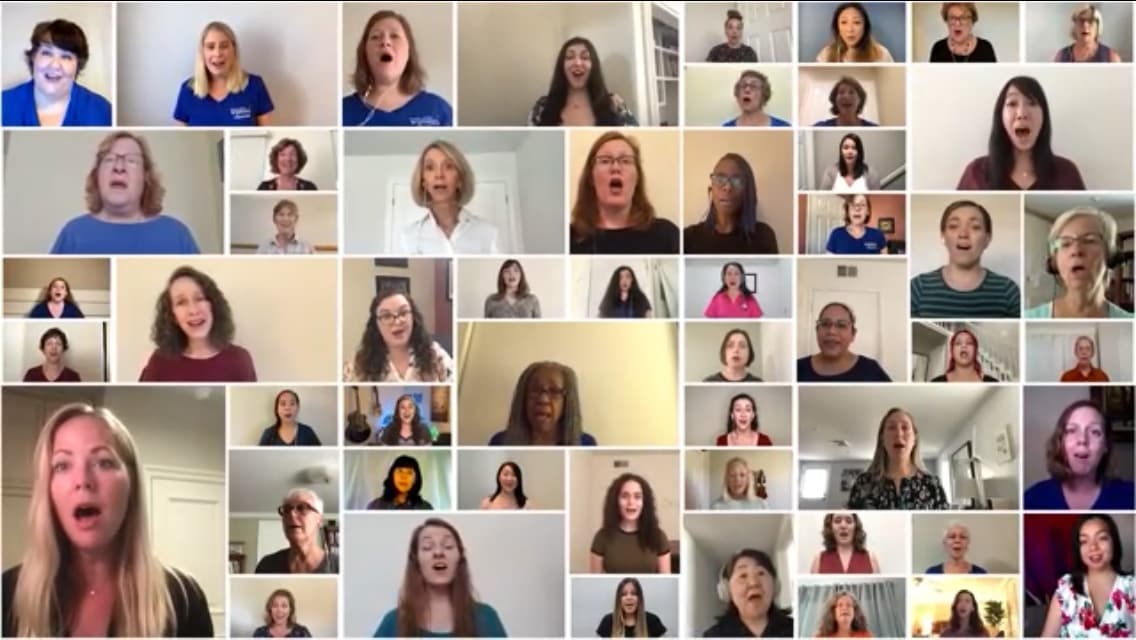 Singers perform as a part of the Orange County Women's Chorus "Something New" online concert.

As the pandemic drags on, fans of the performing arts have become numbingly familiar with the surreal alternative universe that has sprung up to give us some comfort. Our current diet consists of live-streamed concerts broadcast from empty rooms, awkward group sessions that try to hide the technical hurdles of performing together online, and endless solo recitals (interrupted occasionally by pets and kids) recorded in the performer’s living room.

Eliza Rubenstein was determined to shake that stale scene up a bit. The longtime artistic director of the Orange County Women’s Chorus wanted to gift the group’s supporters with something special for the holiday season — a music-filled online celebration that would showcase its strengths but also stand out from the virtual-performance crowd.

“I was really looking for a format that would be something a little more varied than just posting a concert online for people to watch all the way through,” Rubenstein said. “I looked at a lot of different models of how to do that to gauge what might work best for our audiences.”

The result, “Something New,” which debuted Dec. 6 on the company’s website, looks like a lengthy concert program. Set up in online book format with 32 turnable pages, it’s crammed with performances of Christmas-themed music and other works, all of them presented in well-recorded and expertly edited videos. The music is accompanied by detailed, helpful writing about the pieces, biographies of contributing artists, and other information that’s typically found in the best concert programs.

Rubenstein wanted something that would approximate the feel and familiarity of an OCWC concert with some extra goodies thrown in. “We wanted to give people a little bit of control and some of the behind-the-scenes information that we know they enjoy.”

The 14 works in “Something New” run the gamut from Monteverdi and traditional English carols to African American spirituals and a newly commissioned work by California choral composer Dale Trumbore. And Rubenstein pointed out that the presentational formats vary widely.

“We did a combination of the ‘traditional’ (online) choir model with several faces in boxes, a handful of live recordings with singers wearing masks and using social distancing, and a couple of singers who recorded projects on their own.”

Reaction has been overwhelmingly positive, Rubenstein said. “People seem to really enjoy the format. And the composers who have contributed have been pleased with it too.” 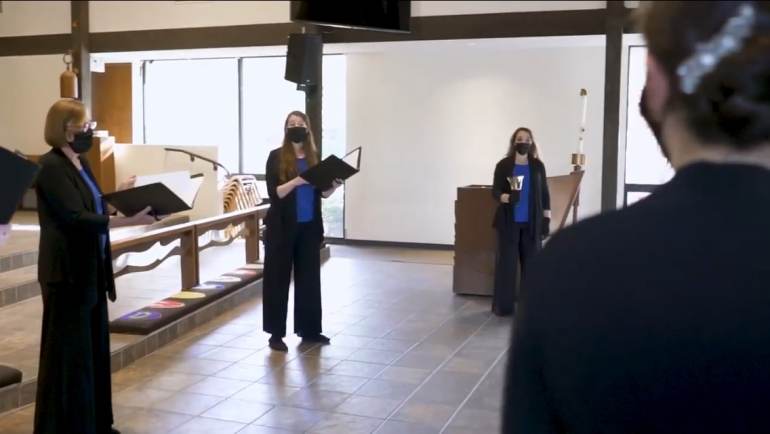 Singers perform as a part of the Orange County Women’s Chorus “Something New” online concert.

An additional benefit: “Something New” features several alumni of the choir. “We’ve been able to include some of our former members who have moved away from Orange County, which of course wouldn’t be possible in a live setting. People really love that,” said Rubenstein.

Even a casual glance at “Something New” reveals it’s a labor of love that probably came with a hefty price tag. A professional was hired to do the audio and video editing, and the sophisticated design and highly interactive nature of the platform are unusual for a modestly sized not-for-profit arts group. Rubenstein said the result would have been far different if not for the group’s many generous supporters.

“We feel ridiculously lucky right now. Our donors are not receiving what they usually do from us in terms of performances, and they still came through for us, even when everyone was a bit on the edge financially. We vastly exceeded our fundraising goals this year. That was amazing to us.”

Composing For Every Comfort Level

Dale Trumbore has a special relationship with the Orange County Women’s Chorus — the group awarded the composer her very first commission back in 2010.

When she was approached to write her latest work for the choir, “What We Hand Over,” the requirements of the commission were more than a little different.

This is the first time Trumbore has written a work for virtual performance. “In March, I wrote two pieces that were intended to be performed on Zoom. But that’s very different from this project,” said the composer, who received her master’s degree in composition from the University of Southern California and lives in Azusa.

Trumbore started by talking with Rubenstein and choir members. “We discussed a lot of different ideas and factors that would play into the piece.”

Singers perform as a part of the Orange County Women’s Chorus “Something New” online concert. which is presented through pages of a virtual magazine.

One important consideration was accommodating different comfort levels among the singers. “What we came up with was this piece where if singers wanted they could just speak a few words into their phone camera. They didn’t have to listen to a click track” (a method of keeping them in sync with other parts of the work). “There’s also a repetitive element that people could record without a (click) track. I really liked this idea of building different levels of participation.”

Trumbore created four different versions of the score. “Eliza got one, the video editor got one, and then the singers got one based on their level of buy-in.” Those who felt confident to work with a click track could sing either a chorus part or a solo part.  “If people were too intimidated by the prospect of singing they could just speak instead.”

Trumbore worked with poet Maya Jackson, who provided the text. Trumbore chose an excerpt from a longer poem that was the right size for the piece’s seven-minute length. The words reflect on the social unrest that has rocked the country in the last few months.

“Racial justice and social unrest, these things have been very much on my mind and everyone’s mind this year,” Trumbore said. “I think Maya has a beautiful way of writing about her experience that asks us to consider our experience as well. It asks us to hold ourselves accountable for our complicity, what we’re handing over to others. Her imagery is really powerful. I want more people to know her work.”

Since the beginning of her career, Trumbore has concentrated on choral writing.

“It’s what I love and what comes easily to me and what people will pay me for. It is the sweet spot between all of those things,” she said. “I love the sound of a choir singing. On a gut level, I really love the human interaction that comes from working with a chorus. I love the different levels of skill and ability that you have in a choir. I write for everything from community groups to professional choirs. I love finding things that are the right sort of challenge for each group.”

Trumbore’s experience composing “What We Hand Over” has shaped her feelings about our current crisis and made her reflect on the positive changes it could bring.

“I hope that when the arts do return to live performance that they’re changed because of the conversations we’ve been having about justice and equality. I also hope that the ease with which we can stay in touch can stay with us as well. It seems so much easier than before for conductors and educators to reach out and say, ‘Can you talk to my class or lead a discussion?’ We realize we’re not quite so distant from each other. I hope that feeling remains.”