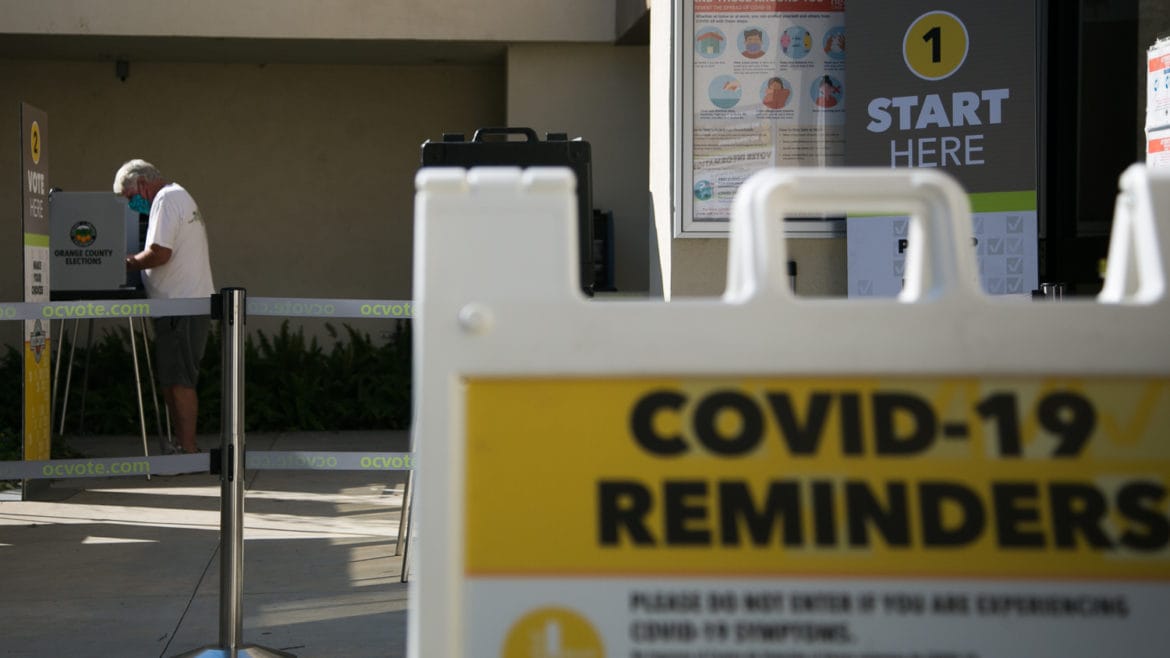 Many coronavirus and sanitation protocols are in place at voting centers across Orange County.

A rising number of county workers have been infected with Coronavirus and a particular spike in recent weeks is setting off intensive discussions among county government leaders about how best to protect the county’s largest workforce.

Yet this ongoing debate is one the taxpaying public isn’t allowed to see.

Like so much of the pandemic, it seems a select group of county government executives and a few elected officials will continue making critical calls, largely on their own.

Voice of OC has been asking for months about how $540 million in federal coronavirus relief funds were invested as well as asking about tracking of infections throughout the county.

Early on, popular pressure for more information about infection data got county leaders to disclose city infection rates along with demographic data about Covid.

But that was it.

County Health Care Agency officials also continue to refuse to publicly release any information about Coronavirus outbreaks – unlike LA County, which publishes a daily dashboard that lists outbreaks by address.

Officials are clearly afraid of freaking people out or stigmatizing victims of the virus by publicizing that kind of data.

Yet given that approach, it seems an appropriate accompanying measure – some might even say a conservative approach – would be to provide residents with the best real-time reporting on infections in order to help them make informed decisions themselves about what businesses or establishments to enter…or not.

Note that LA County’s tracker indicates a majority of infections are happening at the workplace not bars and restaurants.

So what could realtime reporting of infections tell us?

Let’s look at one of our county’s largest employers – the County of Orange.

The data also shows that infections are spiking in recent weeks but it’s unclear whether infections are being transmitted at work or being brought into work.

The Orange County Sheriff’s Department made up about 30 percent of infections, according to county data, with 236 people contracting the virus.

The county’s social workers were next up with just over 20 percent of infections — 164 people.

Health Care agency officials accounted for nearly 15 percent of the infections while a host of other departments also have seen workers infected.

“We know it’s growing significantly in the county just as it has in the community,” said County of Orange CEO Frank Kim in a Wednesday interview confirming the existence of the coronavirus infection tracking data.

Asked whether the County of Orange is doing enough to protect its workforce, Kim responded saying, ‘Absolutely.”

Kim, who himself was infected by the Coronavirus earlier this year from a work contact, notes that about half the county workforce is telecommuting on most days.

Yet there are those jobs – like jails, social services and health care – that are hands on.

For those, Kim said county officials have given PPE masks to employees, established a dedicated testing center and also done mobile testing for workers in remote locations.

“We have had very few complaints filed about safety in the workplace,” Kim said.

Yet Kim also admits that as cases keep rising, there’s pressure to address it.

“We may have to have additional resources,” Kim said. “That dialogue is happening.”

Kim said county officials keep learning, stepping up cleaning of offices along with testing and extending leave benefits so workers don’t have empty sick leaves when they are not feeling well, making it easier for sick workers to stay home.

“It’s a morale issue. It’s us telling our employees we care about their health,” Kim said.

Last month, state regulatory officials quietly released new rules that are already having a big impact, as they require the county as an employer to implement a host of new safety measures around COVID 19.

“Over the past few weeks, OCEA has observed a sharp increase in the County’s reported confirmed COVID-19 cases, but we have not seen the County take the corresponding verifiable worksite actions mandated by the ETS. OCEA and its members are increasingly concerned about the mounting safety concerns emanating from the County’s apparent inaction.  The County must act now to aggressively protect its workers in the face of this national, regional, and local public health crisis.”

One immediate impact from the new Cal/OSHA regulations is already visible at the County of Orange public meetings – one of the few across the region to keep in-person public sessions for most of the pandemic.

For most of the pandemic, county supervisors conducted their sessions without masks.

That changed right after the Cal/OSHA regulations came into effect.

Since then, everyone is wearing masks.

Except for the commenters protesting masks.

Kim said county officials – while reminding attendees about masks – won’t enforce the rules out of respect for First Amendment right of public speakers.

Yet it’s not clear how those rights will be balanced against those of the workers who staff the supervisors meetings or those who want to come comment publicly but don’t want to risk possible infection from those who don’t wear masks.