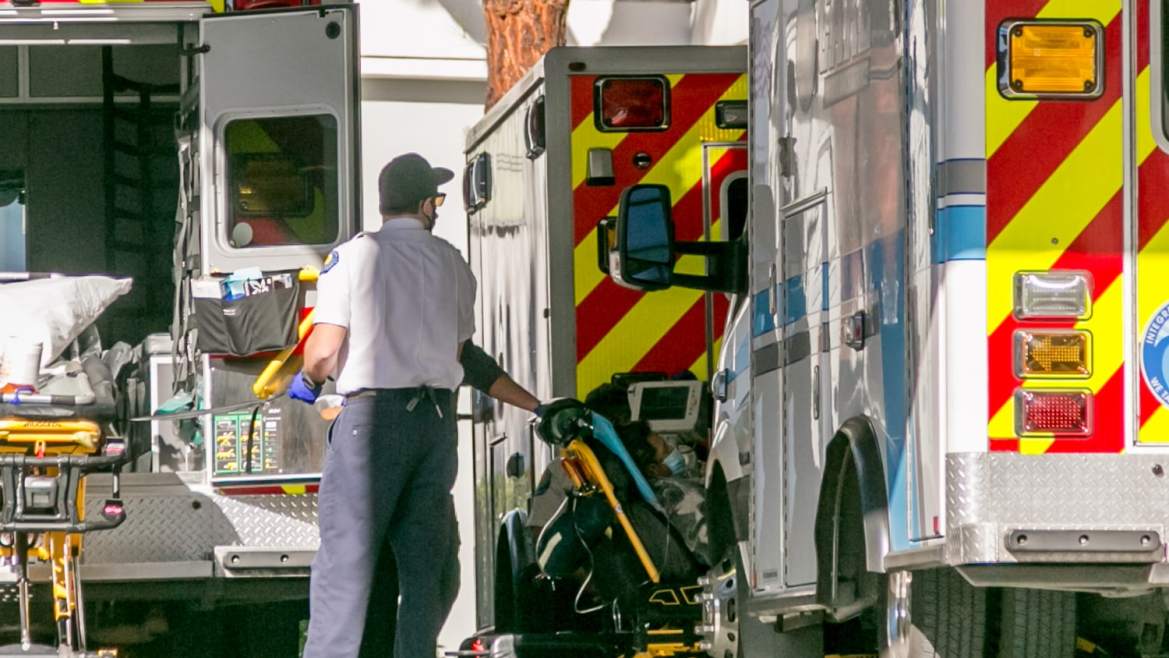 Bodies are stacking up at Orange County hospitals as coronavirus patients keep flooding emergency rooms and intensive care units, while county public health officials are being pressured by the state to distribute more vaccines.

“When the staff in the office that manages the morgue tells me I don’t have any more space … that was the trigger for us to say okay … we need a second truck,” said registered nurse Gemma Seidl, who is executive director of acute care services at St. Joseph Hospital.

She said they ordered a refrigerated truck early in the pandemic, but needed another one as the second wave has been battering OC hospitals.

“We have an outside truck — a morgue — that we had in the beginning and we thought that would suffice,” Seidl said. “It’s an expectation when you’re in health care to see deaths, but it’s not an expectation to see it so much.”

The virus has now killed 1,943 people out of 175,032 confirmed cases in OC, including 17 new deaths reported Wednesday, according to the county Health Care Agency.

Newly reported deaths can stretch back weeks because of reporting delays.

Steel, who chaired the Board of Supervisors last year, was often critical of Gov. Gavin Newsom’s virus shutdown orders and mask mandates.

Back in Orange County, Seidl said there’s delays in funeral services because of the mounting deaths.

“We have families that already have arranged mortuary services, but the mortuary themselves cannot take the bodies because they don’t have room. So that’s why they’re staying in our morgue a little longer,” Seidl said.

She said there’s a support team for medical staff who are feeling overwhelmed by the deaths and Seidl can send nurses home if they can’t continue working, while also finding a replacement.

There’s also nuns who pray for patients and staff in the virus ward, she said.

“We still see the sisters walking around, not too much,” Seidl said, adding they try to keep them out of the virus ward. “They always are here for us, they check up on us. That makes a difference.”

As of Wednesday, 2,249 people were hospitalized, including 485 in intensive care units.

California Department of Public Health officials have been urging the OC Health Care Agency to inoculate more health care workers and the elderly living in nursing homes as the pandemic continues to worsen throughout the state.

“CDPH is in constant communication with the Local Health Departments (LHDs) and are working with them to determine how the state can support accelerated vaccination administration. We have also further clarified guidelines that expand the availability of vaccines to a broader range of health care workers in the three tiers of phase 1a,” reads a Wednesday email from the state health department.

Gov. Gavin Newsom is proposing $300 million in the upcoming budget to aid vaccine distribution throughout the state.

State guidelines call for the first vaccines to be given to hospital staff, while urgent care and primary care medical workers are slated for the second round.

In comparison to last Thursday, 14 emergency rooms had wait times of more than 30 minutes and eight and more than an hour wait.

Siedl said she and her colleagues continue to see waves of virus patients showing up to the hospital.

“We have not even scratched the surface of people who were gathering in New Years,” Seidl said, echoing fears from doctors and epidemiologists of another holiday spike.

The order is slated to last at least three weeks.

“If we continue to see an alarming increase of COVID-19 patient admissions at hospitals statewide, some facilities may not be able to provide the critical and necessary care Californians need, whether those patients have COVID-19 or another medical condition,” Aragòn said in a Monday news release.

The order also requires hospitals to accept transfers from facilities that are in crisis care mode — meaning doctors and nurses have to make grim decisions about who to treat because the hospital is so overloaded.

And a new strain of coronavirus that spreads easier has also surfaced in Southern California.

Spencer Custodio is a Voice of OC staff reporter. You can reach him at [email protected]. Follow him on Twitter @SpencerCustodio
How can I sign up for a vaccine?