“We want it to really be about making sure that people understand that there’s no room for hate right now,” said Alison Edwards, CEO of OC Human Relations Council. “We’re all in this pandemic, in this crisis, and hate should not be part of treating this pandemic.”

Starting in October, the contest received 105 multimedia entries across 29 Orange County schools, which were focused on the theme of the “To Know Better” campaign, inspiring youth to rise above racism.

“We value youth voices. We want to provide opportunities anytime we can to lift up youth voices and perspectives, and help them guide some of the way that we think about the world,” Edwards said.

The winners of the multimedia campaign from each district were awarded $5,000 toward developing anti-hate initiatives at their schools. All of the submissions can be found on the Know Better 2020 website.

District 5: “The Truth Around Us”

Nadine Tong and Natalia Tong, the district five winners, come from San Juan Hills High School in San Juan Capistrano. “The Truth Around Us” focuses on several social movements such as LGBTQ+, Black Lives Matter and UnidosUS, as well as illustrations scattered throughout the project. 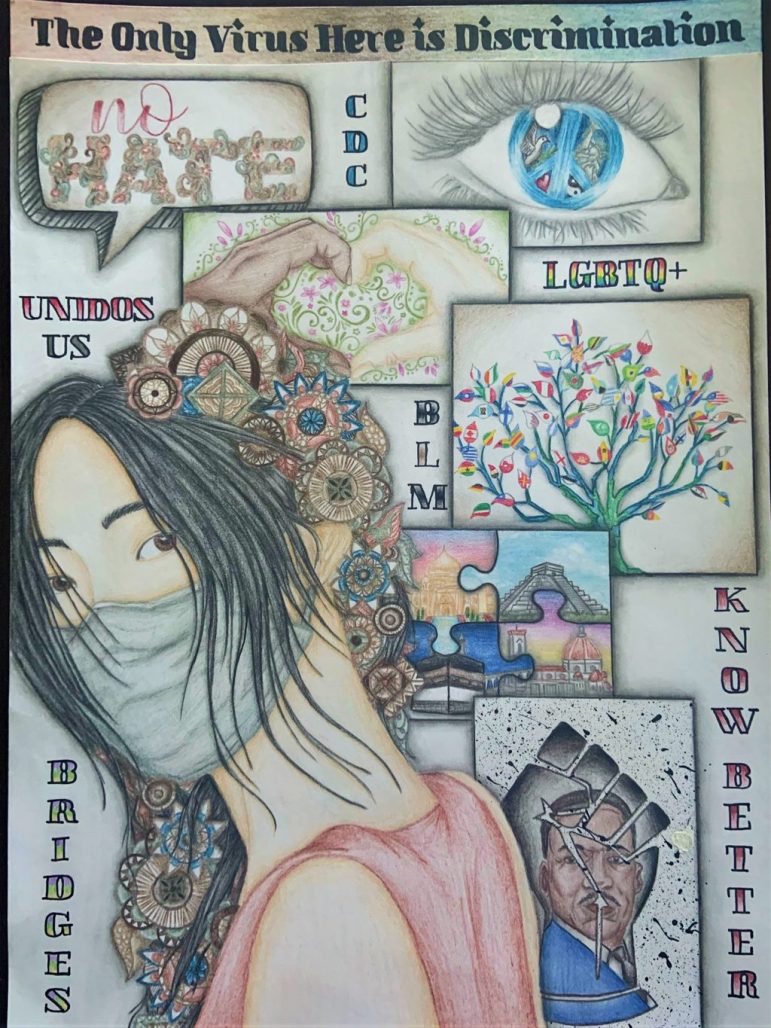 “We hope to see everything good in our society — the diversity, the culture, the community service and the people, but even amidst the inspirational positivity, we lose sight of an underlying reality,” the duo wrote with their submission.

With symbols of peace, solidarity and puzzle pieces uniting different cultures, the scattered illustrations encompass messages of unity among differences. The student artists write that as the world has been dealing with the COVID-19 crisis for the past few months, there is no room for hate. Now more than ever, it’s important to “promote a safer anti-discriminatory environment.”

“Let us become the voice of change that encompasses the message of unity we want to see in our society because the only unjust virus is discrimination,” they wrote with their submission.

District 4: “The Message Behind the Mask”

“I feel like being able to have opportunities to do projects like this that not only are important to us but also important to our community and connect us out to our community … just made us feel a little bit more at ease. It gave us a sense of normality to a certain extent in this time where nothing feels normal,” Eisenbrey said.

Senior Israel Hernandez was the leader who put the project into motion for his team. As an activist living through a pandemic and, simultaneously, the Black Lives Matter protests, he could not continue to watch the world be tainted with hate and not do anything.

“For me, since I couldn’t really go out, I felt like I had to do more. I just saw this as an opportunity to do it and being able to do it with my teammates was the best part,” Hernandez said.

The dance team’s video is 3 minutes and 42 seconds of expressive dancing, partnered with personal and powerful spoken word, written by the students. While Eisenbrey choreographed the first routine in the video, the solo performances that made up the rest of the project were student-choreographed.

“I’m just so proud of my students, not with just this project, but how they persevered through distance learning and all the tumultuous experiences they’ve had since last March,” Eisenbrey said. “It was really cool to create something this meaningful and this impactful in that time that we had together.”

Senior Ximena Marquez, like Hernandez, danced in and narrated a portion of the video. In addition to representing her culture through narrating her spoken word in Spanish, Marquez also emphasized the importance of standing in solidarity with one another, especially during this pandemic where separation appears to be the only safety.

Chloe Wang from Woodbridge High School in Irvine submitted an art piece with a wave of hands trying to uphold the world from getting swept away amid the waves of the ocean. 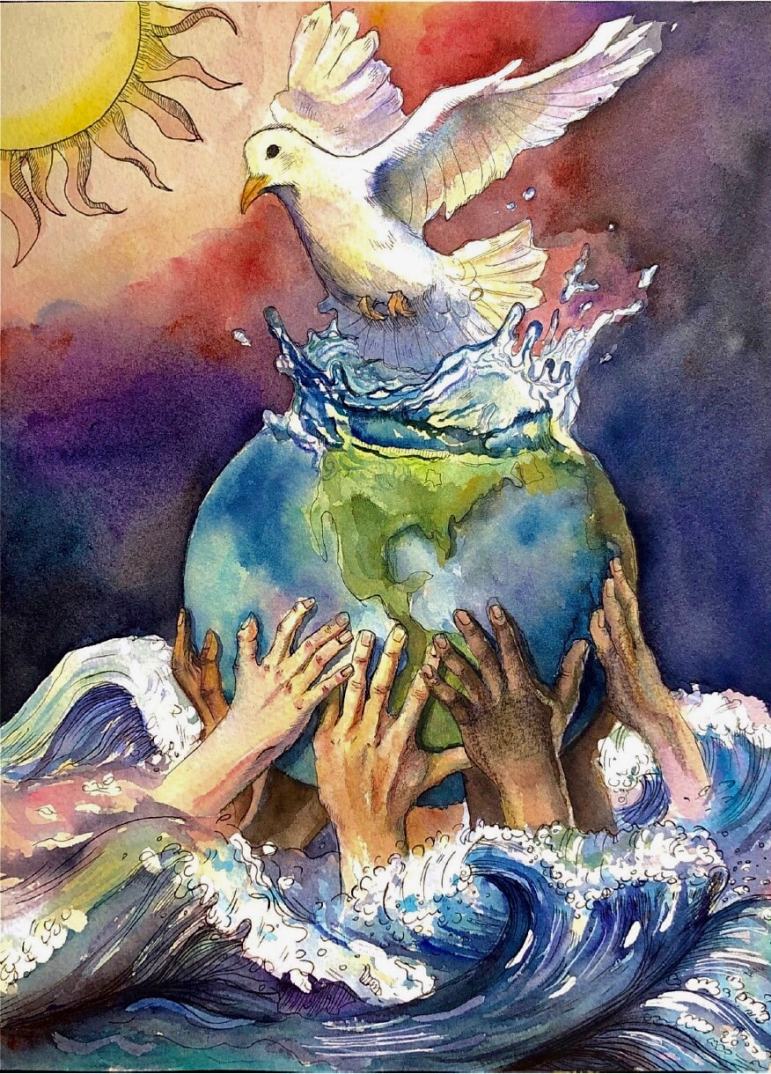 “After witnessing the (unjust) treatment of certain races, so many equality advocates, hold their arms up, (and) strive to improve this society until everyone’s voice could be heard,” Wang wrote with her submission.

Wang writes that waves at the bottom of the piece represent society being washed up in racial bias, hate and discrimination. As the nation witnessed racial injustice and discrimination, especially during the pandemic, Wang said it isn’t the sole job of equality advocates to hold society above water.

“People of all colors and races should unite and treat each other with trust and mutual respect for our shared bright future,” Wang wrote with her submission.

District 2: “Empathy Not Judgment, No Stigma”

From Los Alamitos High School in Los Alamitos, students Alec Wills and Madeleine Berry introduced the topic of social stigma and how it has risen due to the novel coronavirus as a part of a student video broadcast.

After some students from the high school were quarantining, the duo wanted to remind their student body to welcome them back with empathy and not judgment.

The students informed why the stigma was around, including because it’s a new disease and people are often afraid of the unknown. To combat the stigma of people being socially isolated due to exposure from COVID-19, the students went over the do’s and don’ts of stopping the spread socially and physically.

“Stigma hurts everyone by creating more fear or anger toward ordinary people, instead of focusing on the disease that is causing the problem,” Wills said in the video.

The “I Am Not” animation was created by Kaitlyn Nguyen and Sam Naismith from Samueli Academy in Santa Ana. The duo’s project focused on encouraging others not to judge people by stereotypes.

Their submission has two parts: a 20-second animated video explaining their brand, “I Am Not,” and a PowerPoint presentation detailing the creation process as well as how they plan on turning the “I Am Not” brand into merchandised hoodies.

According to their presentation, the project’s overall message is “the color of their skin, the shape of their body, who they love and where they are from does not indicate who they are.”

First district Supervisor Andrew Do congratulated Nguyen and Naismith on Dec. 30, encouraging them to trademark their brand and license the program, according to the academy’s Instagram.

As students in the design learning pathway at Samueli Academy, Nguyen and Naismith plan on continuing their pursuit of design and animation careers after high school.

Kristina Garcia is a writing fellow for Voice of OC Arts & Culture. She can be reached at [email protected].

Kim Pham is a writing fellow for Voice of OC Arts & Culture. She can be reached at [email protected].