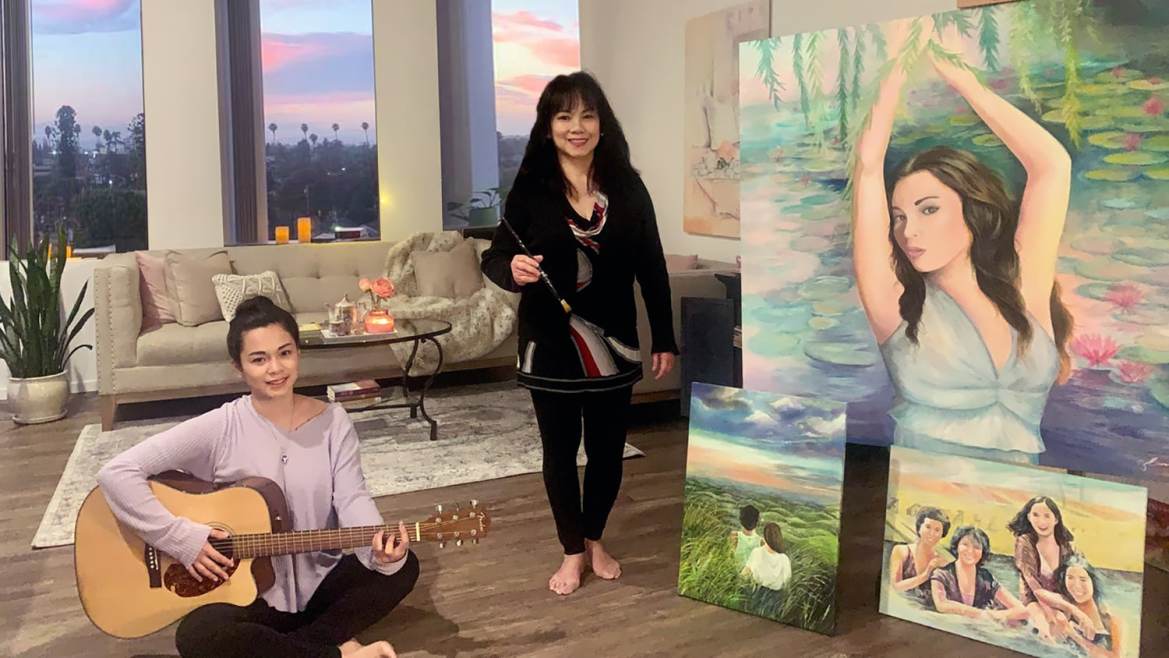 Lorna Manapat, standing, with her daughter Julie and some of their artwork. They both live in the Santa Ana Arts Collective.

It’s been more than six months, and Lorna Manapat still can’t get over the scenery. “I can see Seal Beach,” Manapat said as she gazed out the fifth-floor window of her three-bedroom, two-bath apartment in the Santa Ana Arts Collective. “This is what greets me every morning — this wonderful view.”

Manapat, a 61-year-old painter and aspiring interior designer, moved in last June as part of the first wave of residents to occupy the 58-unit apartment complex at 1666 N. Main St. First proposed in November 2015 and intended specifically for local artists with limited incomes, the government-funded complex was scheduled to receive its initial tenants in December 2019. But seismic retrofitting and other unforeseen challenges delayed the opening of the former bank building for about six months.

From the time the project was announced, interest from the arts community was intense: By the middle of 2019 there were 350 people on the Arts Collective’s “interest list,” three months before formal applications were due.

Manapat was among them. The wait was worth it.

“This place has been a real godsend to me,” said Manapat, who lives in her 1,200-square-foot unit with her brother and her 21-year-old daughter, Julia. “She’s also an artist,” Manapat said of her daughter. “She plays guitar and composes wonderful music.”

The evening view out of Lorna Manapat’s apartment in the Santa Ana Arts Collective.

With high ceilings and plenty of windows, Manapat’s apartment is perfect for a painter. The dwellings weren’t originally meant to serve as studios; residents were supposed to be given access to communal spaces in the complex to do their work. But the pandemic has upended those plans for now. (“Unfortunately COVID-19 has significantly limited the use of the interior shared and public spaces. We are hoping to have all spaces fully operational by summer 2021,” the project’s developer stated in an email.) “I paint in the living room. I can watch TV as I work and look at the view,” Manapat said. “How wonderful is that?”

She also likes her neighbors, although social distancing is keeping everyone physically apart for now. “I’m surrounded by such talented people — artists, musicians, actors, videographers, sculptors. They’re all very accomplished. When I first moved in, I’ll admit I was a bit intimidated!”

Manapat acknowledged that there are some downsides to working at home. “None of the windows open, so I can’t use oil (paints). I’m working with watercolor and acrylic for now.” 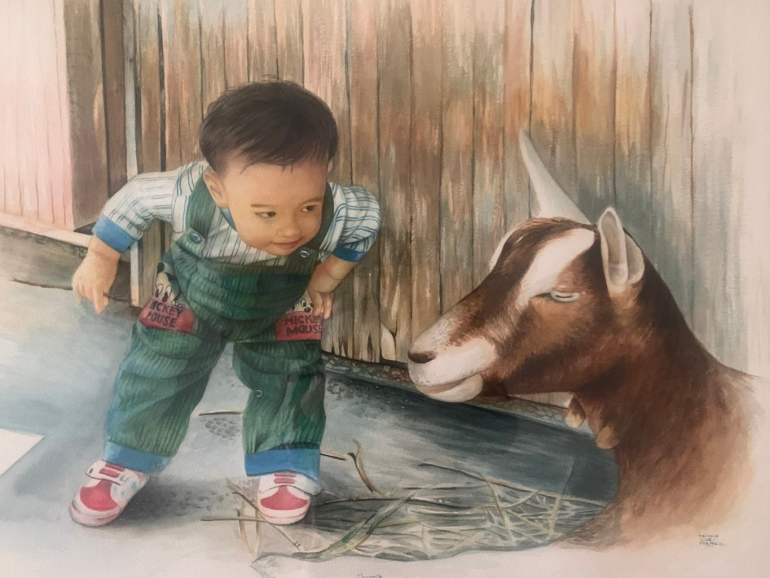 “Kenny and the Goat” by Lorna Manapat

A few quality-of-life issues have come up as well during the six months that she has lived in the Arts Collective, Manapat said. “There’s a small percentage of people who brought their bad habits with them.” Manapat has noticed that some residents smoke in defiance of a building-wide ban. She claimed that homeless people would occasionally camp out in public spaces in the first few months before security was tightened. “And in this kind of setting, (illegal) drugs seem to be used now and then.”

But Manapat said that management has been attending to problems promptly. For the most part, she’s happy with her living situation, and she says other residents seem to share her enthusiasm.

“When you walk from the lobby into the elevator, there’s already a ‘Wow!’ factor. Everyone acts as if getting into this place was like winning the lottery. There’s a great deal of pride.”

According to the Kennedy Commission, which tracks the cost of mortgages and rent in Orange County, we’re among the top 10 least affordable metropolitan areas in the country: “In Orange County, you need to earn at least $162,000 a year to afford a median priced home at $826,000. At this minimum qualifying income, only 21 percent of Orange County households could afford the monthly housing payment of $4,050. The rental market has also taken a hit as Orange County rents reached a record high of $2,004 a month and is projected to get higher.” 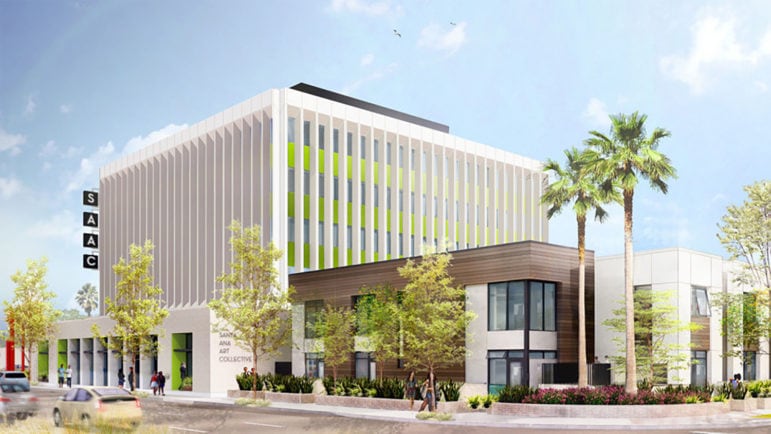 A rendering of the Santa Ana Arts Collective building design.

Most artists scrape by on far less than O.C.’s median income. If you’re a painter, writer, dancer or musician, simply paying the rent on a modest place is a sign of considerable success in your field.

Santa Ana Arts Collective is a mix of studios, one-, two- and three-bedroom units. The ground floor features an art gallery and garden intended to display the work of local artists and residents of the complex.

Applicants must meet strict rules concerning maximum annual income: Households earning between 20% and 60% of O.C.’s median income will be eligible for consideration.

The Arts Collective is part of a larger plan by the city to provide affordable housing to its residents. The city has invested a total of $7.9 million in Santa Ana Arts Collective. A tax-exempt bond of $10 million was issued in 2017 to help with financing the project, which cost a total of $30 million, according to the Meta Housing Corporation.

‘This Place is my Happy Ending’

A native of the Philippines, Manapat came to America at 23 and met her husband two years later. Even after giving birth to her two children and embarking on a 17-year career with Kaiser Permanente, she pursued her art when she could, painting portraits, designing furniture and opening a successful gallery in Orange.

“To me, it was all about getting my American dream,” Manapat recalled.

“It was what I aspired to come here for: to have a family, pursue my artistic ambitions and be loved by someone. For a while I was very, very busy and in the peak of my success as an artist. Neiman Marcus was interested in marketing my furniture.”

But the dream took some unplanned detours. Manapat and her husband divorced; she had to give up her gallery. “For years I was trying my best to get out of Kaiser Permanente and return full-time to my art. Every time I tried, something came up. It was like, ‘When will I get out of this?’”

Her present living circumstances finally allow Manapat to enjoy a comfortable life without the formidable housing costs that keep so many people her age awake at night and working long hours during the day. Although she wouldn’t reveal what she pays in rent, “I now have enough for me to retire and live comfortably and practice my art. I can still manage to vacation once in a while. I’m only working a few hours per week. I’m not stressed like I used to be.” 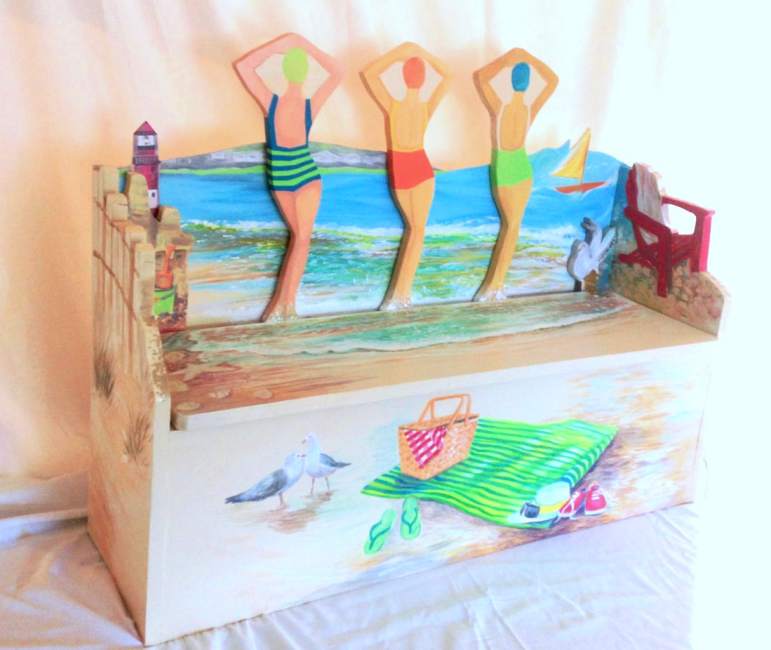 Along with paintings, Lorna Manapat also creates one of a kind furniture, like this painted bench.

Moving into the Arts Collective also reunited Manapat with her daughter, who spent several years living with her father. “The building brought us both back together. She and I practice our art together. This place is my happy ending, surrounded by family and art. I’m finally where I always wanted to be.”