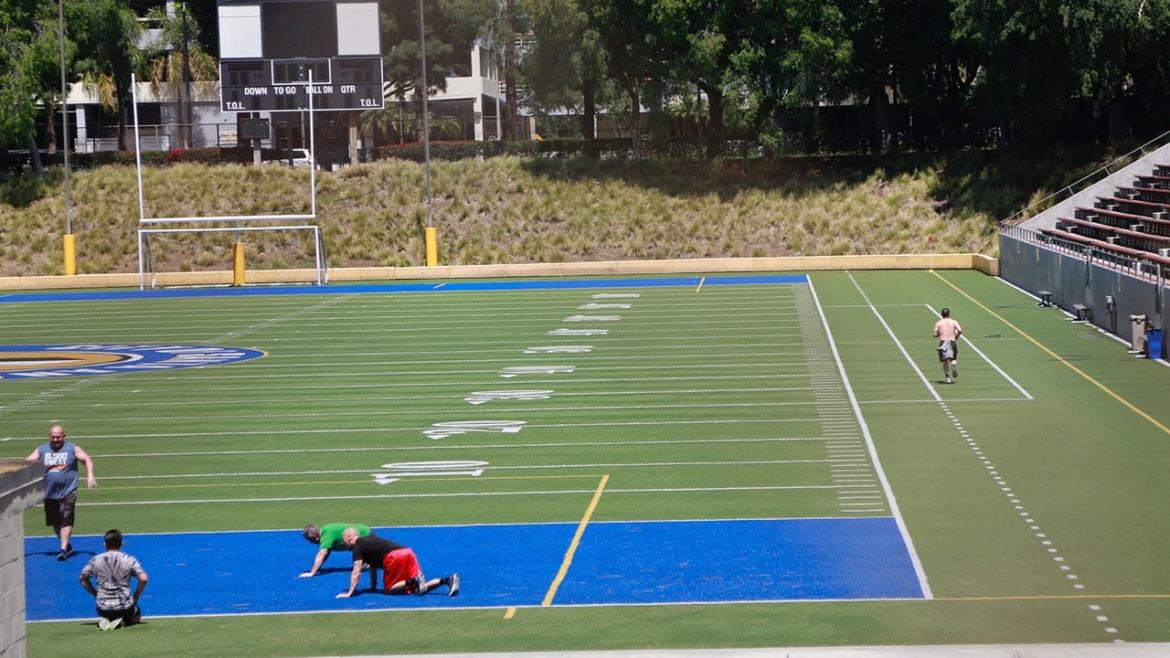 Orange County kids are expected to be able to play football, rugby, soccer and other outdoor sports starting this Friday, after not playing in organized fashion for nearly a year since the coronavirus pandemic began.

The county’s overall virus situation has been getting better, following the massive case spikes that began in November, which led to the tsunami of patients who flooded hospitals throughout December and early January.

“Our children will be able to play outdoor, high-contact sports, such as football, rugby etcetera. Effective this Friday, so that is good news,” Chau told Supervisors during the virus update.

“So there’s components … that do require high-contact sports like rugby, like water polo — yes, like football — that we have some testing requirements that the state of California will pay for,” Newsom said, adding the tests shouldn’t cost parents any money.

He said the mandate will be “periodic testing for those cohorts 13 years and older.”

Meanwhile, updated statewide school reopening guidelines could soon be rolled out after Newsom, state legislators and teacher union representatives have been privately negotiating.

But it’s unclear if the negotiations will lead to more classrooms opening up again.

At a Tuesday news conference, Newsom gave very little details about what could be in the new plans.

“I’m not going to get into any details in the weeds right now. I’m not saying we’re in the one or two yard line, but we’re in the red zone,” Newsom said.

He also didn’t say if there will be a statewide classroom reopening mandate, or if the issue will be left to local school boards.

“We’re going to leave those to the private conversations and I’m very hopeful that we’re going to publicize that very shortly,” Newsom said.

Many schools in North and Central Orange County are still closed because the virus hit the areas hard.

State officials also plan to set aside vaccines for teachers.

“We have a framework going out next Monday — 75,000 doses minimum, 10% of all new doses arriving in the state will be set aside for teachers,” Newsom said.

Counties are expected to allocate 30% of their vaccines for teachers, childcare employees and other educational workers.

Some OC Supervisors expressed concerns that the change in vaccine allocations could prevent local seniors from getting the shots.

“What is the science that says give it to the grocery workers, give it to the teachers,” Wagner asked Chau. “Is there science supporting doing that and shorting the demographic that is most susceptible to the disease?”

Chau said there’s many people younger than 65 who have chronic health conditions like obesity and diabetes who are vulnerable to the virus.

“The new rules don’t say those educators or childcare workers or farm workers … with the underlying health conditions,” Wagner said.

Wagner questioned whether the new allocation guidelines could complicate efforts to protect seniors through vaccines.

“I assure you that it won’t happen in Orange County,” Chau responded, adding that the county’s been able to increase the number of seniors vaccinated by 25% in roughly two weeks.

“I’m hopeful that every two weeks we’ll add another quarter,” he said.

Chau said he could bring a policy proposal that keeps seniors at the top of OC’s vaccination priorities, despite changes at the state level.

Local hospitalizations and daily new case numbers have been dropping.

As of Tuesday, 539 people were hospitalized, including 152 in intensive care units.

That’s roughly a quarter of hospitalizations OC had in early January.

No new deaths were reported Tuesday — the first time that’s happened since December.

In total, the virus has now killed 3,848 people — more than seven times the flu does on a yearly average.

Chau said the county is on track to enter the Red Tier on the state’s reopening system in a couple weeks because positivity rates have dramatically fallen.

That means indoor dining could come back.

“We are now in the Red Tier number for about four days. And we are just waiting for our case rate to drop to the Red Tier,” Chau said.

Currently, OC is seeing an average of nearly 12 new cases per 100,000 people. In order to get out of the most restrictive Purple Tier, the average case rate needs to stay under 7 for at least two weeks.