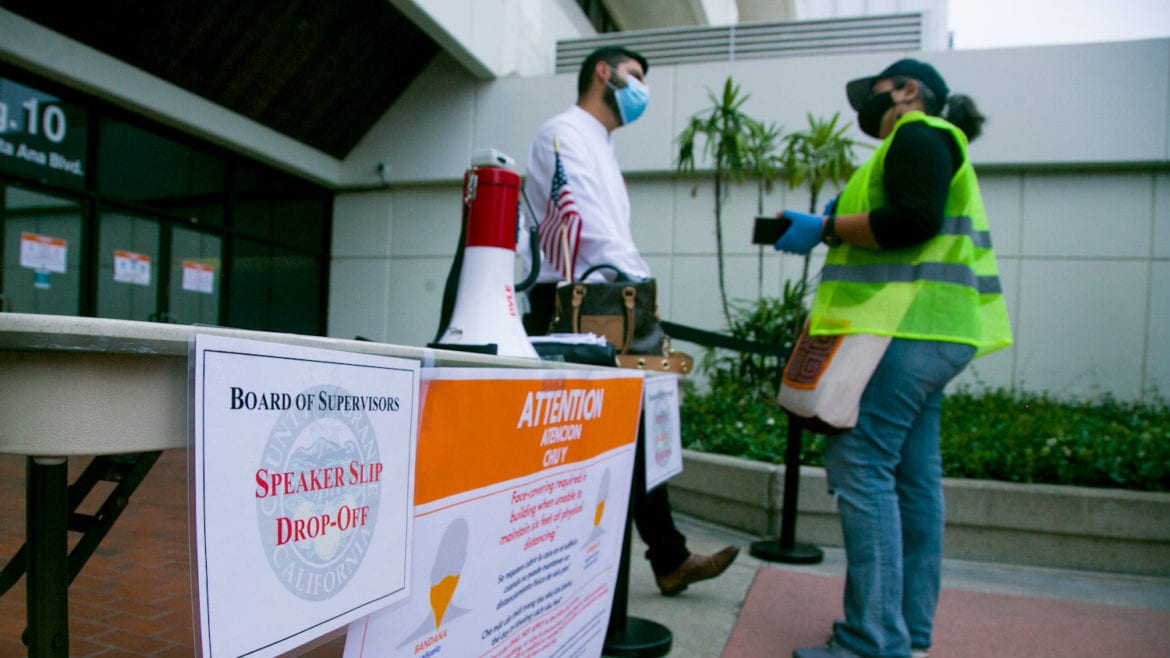 A table for submitting public commenter speaker slips outside the Orange County Board of Supervisors meeting on Tuesday, June 23, 2020.

It’s rare in government circles when residents can actually pin a glitch on a political leader in a public manner, in realtime.

When that happens, it can often mean trouble for political fortunes.

Think of current California Gov. Gavin Newsom and the shutdown-related recall he is staring down.

Given the scores of Orange County senior citizens and their adult children scrambling over the past few weeks to make appointments to get vaccinated – using the glitchy, frustrating vaccine appointment rollout provided by the County of Orange – I’ve noticed a growing tide of frustration and anger aimed directly at Orange County supervisors like never before.

And direct calls for their removal.

“Recall all 5 of them, including Barnes. This is unacceptable,” said resident Teri Lee on the Voice of OC Facebook page.

Another reader on Twitter posted, “We keep trying to vote them out and they keep buying their way back in. No harm in trying a recall.”

Keep in mind there are more than 3,000 Orange County residents who have died from the Coronavirus since last March – five times the amount killed by the flu in a normal year.

And today, there are hundreds of thousands of Orange County residents who are trying to get vaccinated…without luck.

According to the county’s own vaccination sign-up website and app, called Othena, there are 552,971 people registered to get a vaccination.

Now if you ask about delays and glitches, county officials point to the 116,011 residents that have gotten a shot.

Indeed, the county supervisors and health care agency officials I’ve interviewed on this insist that the people they spoke to at the vaccination super sites are thrilled and happy with the vaccination rollout.

Yet I wonder if county supervisors are placing too much faith in those rave reviews, from folks who have every reason to be happy.

To get a sense of the deep frustration felt by many Orange County residents, consider the remarks of Chapman University Trustee Fellow Mark Chapin Johnson – one of the county’s leading business leaders turned political scientist, who was one of founders of the influential GOP fundraising group, the New Majority.

“If it weren’t so tragic and if people weren’t dying this would be hysterically funny. The Supervisors are blaming Othena for the screw-ups? It was the Supervisors that created this astonishing mess,” Chapin Johnson wrote me.

“They sat on their hands for eight months while they had huge resources available to prepare a functional system. Spent tens of millions on everything EXCEPT preparing the County for the vaccine. They wait until the end of November to issue a contract for just a minuscule million dollars to a new and untested firm that was supposed to have a system working in THREE weeks.

Epic failure on the part of the Supervisors. And now they line up to blame Othena. Give me a break. Talk about culpable incompetence !!”

Chapin Johnson noted the entire county Covid response had been feeble, adding “I can’t remember a time when people were dying needlessly in our County and multitudes of leaders were absent and unaccounted for – not to mention actively misleading citizens through their incomplete and inaccurate statements.

Lawrence M. Light, a 20-year senior resident of Mission Viejo, wrote me after trying to use the county’s appointment app – called Othena – also noting that “Othena is non-functional as far as I’m concerned and the people who instituted it need to be fired or impeached.”

After dealing with Othena, Light said some friends from LA County alerted him to call Kaiser, on an old-fashioned 800-phone number, and he got an appointment for March in one day.

It’s been a scenario I’ve been hearing about for weeks – Orange County residents running like refugees to other counties – like San Bernardino, San Diego and Los Angeles to get vaccinated.

In fact, one note I saw from a reader indicated that one San Diego county facility had to cut off OC residents because there were so many flooding their vaccination clinics. Same apparently for another facility in San Bernardino.

The vaccination confusion, which many county officials acknowledge is largely a communication problem, has left many residents questioning whether the County of Orange can still really meet its obligations.

“The lack of clear communication and urgency and the inability to provide a way to schedule shots for residents here in the OC means our government has broken down in this emergency and needs to be replaced with new people who can move quickly in an emergency like a pandemic,” Light wrote.

The County’s own disaster plans insist on robust public information efforts, especially during a pandemic.

Yet the County of Orange just doesn’t prioritize – much less fund – public outreach.

Note that Orange County is currently facing virulent outbreaks throughout its homeless shelters, jails and the county workforce.

Basically, every vulnerable group that the county government was supposed to protect has been let down.

And so far, county supervisors haven’t asked a word publicly about any of this in more than a month.

They rarely check under the hood in public anymore.

Consider how the County of Orange County decided to spend $1.2 million on Othena?

Despite mounting questions, no one will say much about how this contractor was identified or even the need for an app – as opposed to simple website registration or an 800-number for vaccination registrations.

How is it that Kaiser can run a public call center but the County of Orange can’t?

County CEO Frank Kim defends more than $200 million in private contracts saying that during an emergency, contracting has to be done in secret because of the speed necessary to get products into the field.

Yet why not inform the public at some point?

County officials have consistently refused to releases records about Covid outbreaks or deaths. They also have been slow to provide details to reporters about vendors getting contracts or how outbreaks are being handled throughout the county workforce, jails or homeless shelters.

Week after week last year, county officials convened poor excuses for press conferences – only allowing reporters to ask one question with no opportunities for follow ups.

That allows officials to dance around issues and rarely get into specifics on policy. When they would promise publicly to follow up, it would either take a really long time or they just would ignore information requests altogether.

This year, they’ve cut back on weekly press conferences altogether.

County of Orange officials complain Voice of OC reporters ask too many questions.

Numerous sources tell us these discussions – where press members are specifically prohibited – are much more frank and detailed on response issues that what residents are seeing play out on the public dais.

Now, the same pattern also has been playing out at the state, which also has been called out for being secretive about Covid information and policies.

More and more, it seems the pandemic’s most enduring victim continues to be the public’s right to know.