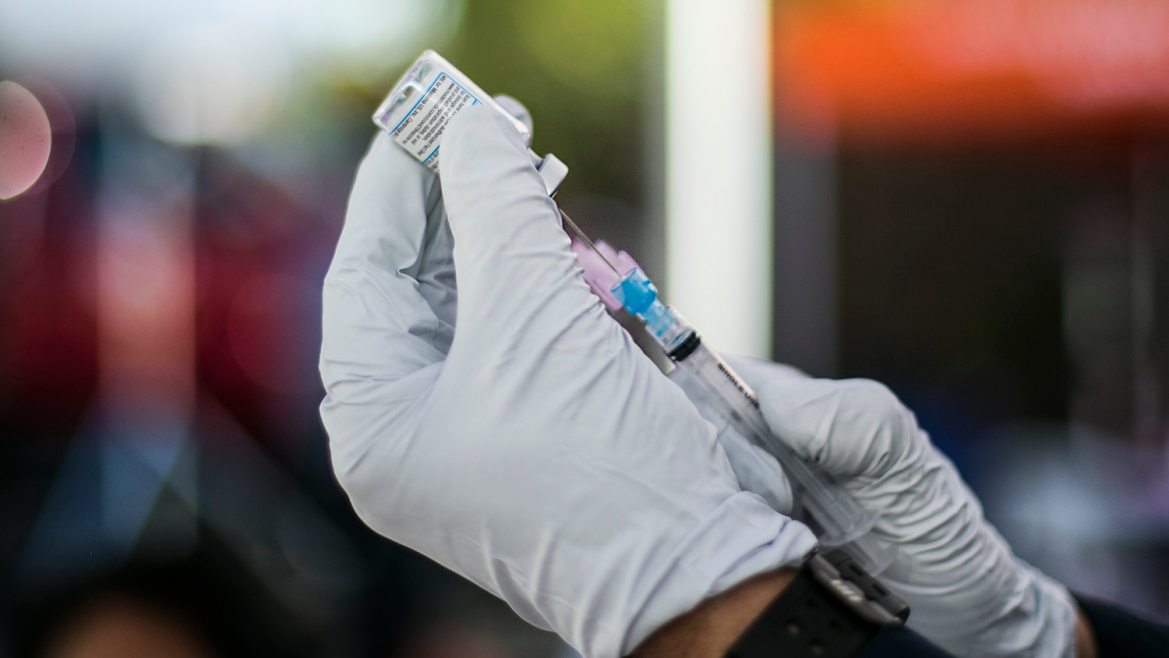 A worker prepares to vaccinate someone with the coronavirus vaccine at Orange County Fire Authority headquarters in Irvine. Jan. 8, 2021.

This story has been updated.

After a coronavirus vaccine storage scare at Soka University, Orange County health officials late Wednesday said the doses can still be administered after speaking with the manufacturer.

“A refrigeration problem was detected last night, rendering some vaccines unusable at this time,” said county spokeswoman Molly Nichelson in a Wednesday afternoon text message. “Additional vaccine was brought in to fulfill all of the appointments scheduled at Soka. No disruption to our vaccination efforts.”

She also said county officials were working with the manufacturer to see if any doses can be salvaged.

Nichelson didn’t say how many vaccines could have been damaged or thrown out.

In a late Wednesday afternoon announcement, county officials said Pfizer determined that the vaccines are safe after officials withheld them from distribution to be safe.

“After reviewing the details, the manufacturer advised that the temperature variance did not harm the vaccine’s safety or efficacy and provided confirmation that the vaccine is safe to dispense under the normal protocol,” Nichelson said in a late Wednesday text message. “There were no disruptions to the appointment schedule or the administration of the vaccine at the Soka University Super POD site today.”

Meanwhile, waves of residents took to Twitter to complain about the sudden rescheduling of their upcoming appointments.

Most of the rescheduled appointments were for this weekend.

“Some second dose #OCCOVID19 vaccination appointments scheduled for February 13 & 14th at @OCGovCA Super PODs had to be rescheduled to better manage vaccine supply. We apologize for any inconvenience this may cause the community,” reads a Wednesday afternoon Tweet from the county Health Care Agency.

While county public health officials are managing an apparent reallocation of vaccines, calls are growing louder to get data on where exactly vaccines are going in OC and to vaccinate more vulnerable people.

Elected officials across Orange County are increasingly calling on local and state public health officials to release coronavirus vaccination data broken down by zip codes in an effort to target shots to the hardest hit communities.

“I think it should be mentioned once more as we all know Latinos are disproportionately behind in vaccination rates,” said Anaheim City Councilman Avelino Valencia during Tuesday’s council meeting. “I’d like to recommend that we work on improving vaccination numbers.”

While Anaheim has a vaccination super site at Disneyland, it’s unknown how many city residents have been vaccinated.

Sidhu also said he wants data on “some of the major neighborhood zip codes … we have high cases of COVID.”

Councilman Jose Moreno not only wants zip code data, but also information about who’s being vaccinated at the Disneyland supersite.

“One piece of data that suggests it’s largely not Anaheim being vaccinated at the super pod,” Moreno said, pointing to the vaccination demographics for Latinos, which is 11%, according to a county vaccine tracker.

“Given that our city is 55% Latino and we know it’s disproportionately working class … we know they are not the ones getting vaccinated. Absent more data, I can only come to the conclusion that there is profound inequity,” Moreno said.

Santa Ana council members are also pushing the county for zip code data and targeted vaccinations in the city.

“The demographic really doesn’t fit those that are most disproportionately impacted, even to his own admission,” Sarmiento said.

Chau also said officials are working to set up a vaccination site at Santa Ana College and the Christ Cathedral in Garden Grove, although no definitive timeline was given.

Gov. Gavin Newsom has been hinting that statewide data on vaccination demographics is coming soon.

“From all the reporting you’ve seen at the county level, the state will be putting out aggregates … later this week,” Newsom said during a Wednesday news conference at the Fresno Fairgrounds.

Some people were chanting “recall Gavin” during his news conference as the recall efforts against him are growing to the point where it’s likely to make it on the ballot.

He’s been facing criticism for some of the public health orders, like banning outdoor dining while leaving malls open during the regional lockdowns that ended last month.

Newsom’s also been heavily criticized for having dinner inside a high-scale restaurant with friends and lobbyists at a time when indoor dining was shut down last year.

Questions remain on how comprehensive the statewide vaccination data will be.

At Tuesday’s OC Supervisors meeting, Chau said a local hospital official told him the state isn’t collecting some of the data hospitals are uploading to the statewide vaccine reporting system.

Meanwhile, Newsom said 100,000 more vaccines are being shipped directly from federal officials to the roughly 100 pharmacies for “underserved communities.”

Yet, the three pharmacy locations that opened up in OC are nowhere near the hardest hit areas.

Three sites are slated to open at CVS pharmacies in Irvine, Newport Beach and Huntington Beach to vaccinate people 65 and older.

While the pharmacy vaccines are available to all seniors, concerns have been raised about some residents in the hardest hit areas struggling to get to CVS clinics.

“So it baffles me, honestly. I don’t understand why that is the first target,” Gohil said.

CVS officials haven’t responded to questions on how exactly the sites were picked.

Gohil said she understands state guidelines may hamstring some targeted efforts, but there’s still wiggle room in them, like vaccinating seniors in OC’s poorest communities.

“I do understand, however, that the guidance has been to include those 65 and older. So in that population, they’re just trying to get things out broadly,” Gohil said. ”But it shouldn’t be only for that group. It really should be centered around the hardest hit communities.”

As of Wednesday, 1,009 people were hospitalized, including 310 in intensive care units.

But deaths continue to increase.

The virus has now killed 3,451 people, including 35 new deaths reported today, according to the county Health Care Agency.

Since February began, 389 deaths have been reported.

There were 1,187 deaths reported in January, many of which happened in December as hospitals were filling up with virus patients.

The virus has already killed more than five times the flu does on a yearly average.

It’s also killed more than heart disease, Alzheimer’s disease and strokes do on a yearly average.