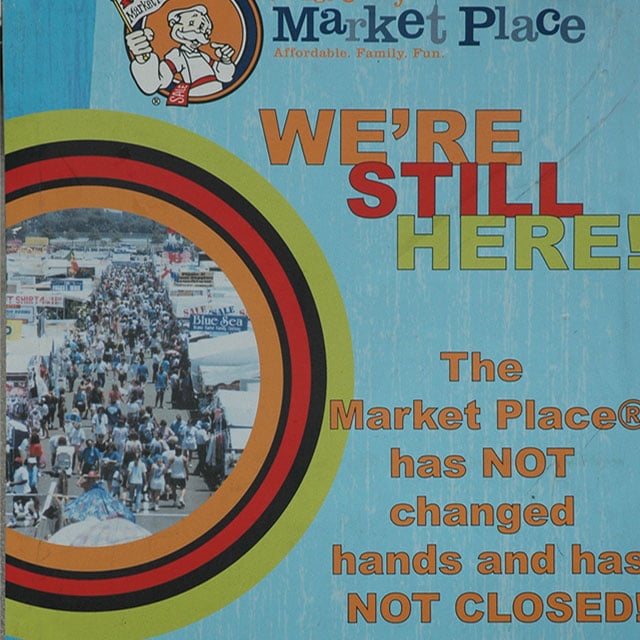 A sign outside the weekend swap meet at the OC Fair and Events Center.

Thursday, April 8, 2010 |Virtually every local political leader now agrees that the plan cooked up by a group of Orange County fair board members to privatize the fairgrounds last year was horribly conceived and executed.

There is less agreement, however, on how the deal shot up the political ladder and then went so bad, so fast. Instead there is a lot of high-level finger pointing and stories that don’t completely add up.

In the meantime, the taxpayers of Costa Mesa are at this point stuck with cleaning up the mess, to the tune of $100 million – the price tag for buying the fair property. City officials have just weeks to consider purchasing the historic 150-acre site while at the same time grappling with a sinking city budget.

If they can’t pull it off the fairgrounds could end up in the hands of a private developer.

“It’s really sad,” said Fair Board member Mary Young. “The board of directors were well-intentioned. We’re all volunteers. We wanted to be on the fair board to make a better fair.”

Yet the fair saga showcases that even the best of intentions when mixed with poor planning and the right set of political connections can create big problems. The victims most often on the hook are taxpayers.

Last summer, with the state as broke as it’s ever been, Gov. Arnold Schwarzenegger made the desperate decision to put a basket of California’s classic landmarks on the auction block — San Quentin Prison, the Los Angeles Memorial Coliseum and fairgrounds from Del Mar to Sacramento.

Communities throughout the state responded with a clear message: You’re not selling our landmark.

But not Orange County.

When a group of county leaders found out that the fairgrounds in Costa Mesa was among the properties the state was trying to unload, they saw an opportunity to take a government asset and make it a private one.

It was a core Republican principle that was easy to sell in the most Republican of counties.

The fairgrounds, they reasoned, would be better run and more profitable out of the hands of government. So in July the local fair board, which included local Republican heavyweights such as Dale Dykema, Mary Young, Dave Ellis and Kristina Dodge, formed a private nonprofit and tried to make a deal.

But instead of a deal, according to one ongoing lawsuit, the state attorney general and the county counsel, the board members made trouble by ignoring the state’s open meeting laws as well as its conflict of interest statutes.

A majority of the fair board – officially called the 32nd District Agricultural Association – got together in private and formed a non-profit foundation to purchase the fairgrounds they administer on behalf of the state.

The arrangement was so troubling to Brown’s office that it took the rare step of resigning from a public body that it was representing.

“Given the seemingly intertwined and potentially conflicting interests of the district, the district board members and the non-profit, we have determined that we should withdraw from providing legal services to the district,” Rodriquez wrote in a December letter to the board.

Right on the heels of the attorney general resignation came a lawsuit brought against the fair board by former employees who alleged that fair board members were seen and heard talking about the plans to buy the fairgrounds. The lawsuit accuses the board of not only violating open-meetings laws, but also government code violations regarding conflict of interest.

‘These Guys Didn’t Think This Through’

Fair board members interviewed for this story don’t see anything wrong with their actions.

“There is no conflict of interest,” Ellis said. “Any communication that occurred between fair officials and government officials were within the confines of the law and done on the up and up.”

The communications weren’t enough on the up and up for two county supervisors who had initially applauded the privatization idea.

Supervisors John Moorlach and Bill Campbell raised concerns about the nonprofit’s formation before the attorney general resigned and the employee lawsuit was filed.

Moorlach said when he first heard of the deal, “the idea of putting together a foundation together made sense.”

On July 28, just a week after the non-profit was registered, supervisors passed a resolution supporting the idea, which was right on the heels of state legislators placing a “for sale” sign on the property.

For Moorlach, what made the deal credible was the involvement State Senator and Republican power broker Dick Ackerman, who had just been termed out of the legislature. At first, Moorlach thought Ackerman’s role meant the players had an inside track into the governor’s mansion.

“It seems Ackerman always had something moving along with Fred Aguiar,” who oversaw the State Department of General Services that is responsible for conducting the sale of the fairgrounds, Moorlach said.

But Moorlach said his feelings later changed when he learned that Ackerman had some sort of contract with the fair board. He questioned how the fair board could use public money to pay for a private lobbying effort to benefit a private foundation they were also running.

“That’s when I froze,” Moorlach said. “These guys didn’t think this through.”

Fair officials have resisted numerous calls and public record requests for Ackerman’s contract. Ackerman did not return a call for comment to his law firm for this story. And officials with the governor’s office have not responded to a request to interview Aguiar.

Moorlach and Campbell both started asking uncomfortable questions to Ackerman and Ellis just as public outcry over the potential loss of the fairgrounds was intensifying.

“It created some anxiety on their side,” Moorlach said.

Ellis said Moorlach is engaging in revisionist history. Moorlach and other county officials, Ellis said, were working hard from the beginning to get the sale pushed through at the state level.

“John Moorlach was part and parcel of that discussion back a year ago when we hosted him and his chief of staff, Mario Mainero, for lunch,” Ellis said referring to early discussions about the non-profit purchasing the fairgrounds.

Ellis said the only officials working the legislative floor to push through the fairgrounds sale were with the county.

They were “trying to shape this thing so they would have an inside track,” Ellis said.

Campbell acknowledges Ellis’ assertion on this point. In fact, Campbell said, tension with Ackerman – who he calls a close friend – came when Campbell tried to insert language into legislation authorizing the sale that would have stipulated the property had to remain a fairgrounds.

“Dick heard about that, and called me to chew me out for not letting him know,” Campbell said noting that it was a courtesy to let fellow legislators know about changes to legislation they are sponsoring. “We got over it, very quickly.”

However, while Campbell may have smoothed his relationship with Ackerman, his description of Ackerman actions indicates that the former legislator’s fingerprints are all over the failed privatization bid.

Ackerman left the legislature in late 2008, which means he could not lobby the legislature for a year. This is what makes Campbell’s remark about Ackerman following a legislative tradition curious.

However, the indications are now that Ackerman limited his lobbying to the executive branch, working with Aguiar. This would mean that Ackerman is not running afoul of state law.

“Where I felt things got weird,” Campbell said, “was when we said to the foundation early on that we would like to work with you, and we would willing to provide a financing source but you’ve got to make sure your meetings and decisions are open to the public.”

Campbell continued, “for some reason, Ellis didn’t really like that.” He feels they compete with the Great Park” and needed a competitive advantage to guard things like entertainment contracts.

“I said, you’re using public money to do this and the public has a right to know,” Campbell added. “They never came back to us to ask for the money. And that made me concerned that it (other financing) may be from a developer.”

Ellis said the reason the bid to privatize the fair went bad was not because of how it was managed by the fair board, but because of all the entrenched interests that want to keep things as they’ve always been. Topping Ellis’ list is Tel-Phil Enterprises, the vender that runs the weekend swap meet on the fairgrounds.

“I don’t think given the history of this particular piece of property, we’ll ever sell another piece of surplus real estate in California if this property is any indication of how the process will go,” said Ellis.

He also admits that the fair board just got out-played in the arena of public opinion by Tel-Phil and local activists who want to keep the property in public hands.

“We were unable to manage the process,” Ellis said. “And we up against a very well financed business on the fairgrounds – Tel-Phil Enterprises – that is looking to protect their self interest. We could not compete with that.”

Jeff Teller, who heads Tel-Phil – the company that has run the marketplace swap meet since the 1960s – said Ellis was way off.

“It’s nonsense,” Teller said. “The money that Tel-Phil has spent to preserve the OC fairgrounds, wouldn’t buy a well-equipped Toyota” noting that the company – along with the equestrian community, fair show promoters, concessionaires and other individuals connected to the fair – did pay for a public relations firm and a lawyer.

“The only thing that Ellis can come up is that he was outspent,” Teller said. He notes that the fair foundation idea was half-baked and didn’t take into account community attitudes toward the fairgrounds…or the potential impact of motivated activists.

Teller said the coalition of more than 50 activists — called the Orange County Fairgrounds Preservation Society — were tireless in their efforts. They had the “derail the sale” website, a Facebook page, and a petition with 50,000 signatures.

They went to Sacramento at their own expense and got in the face of legislators. They got cities to pass resolutions opposing the sale. And they never let up on the fair board attending each meeting and submitting numerous public record act requests.

Members of the preservation society have made it clear that they will continue to fight to keep the fairgrounds in public hands.

Just as city officials are grappling with a collapsing local budget — nearly $30 million in budget cuts this fiscal year — they’ve got to figure out how to negotiate a multi-million dollar real estate acquisition.

“We’re a little sensitive,” said City Manager Alan Roeder, referring to the tight spot the city is in. “We’re having to do this on a shoesting.”

For Campbell, the moral of the story is clear. “Be careful what you wish for.”