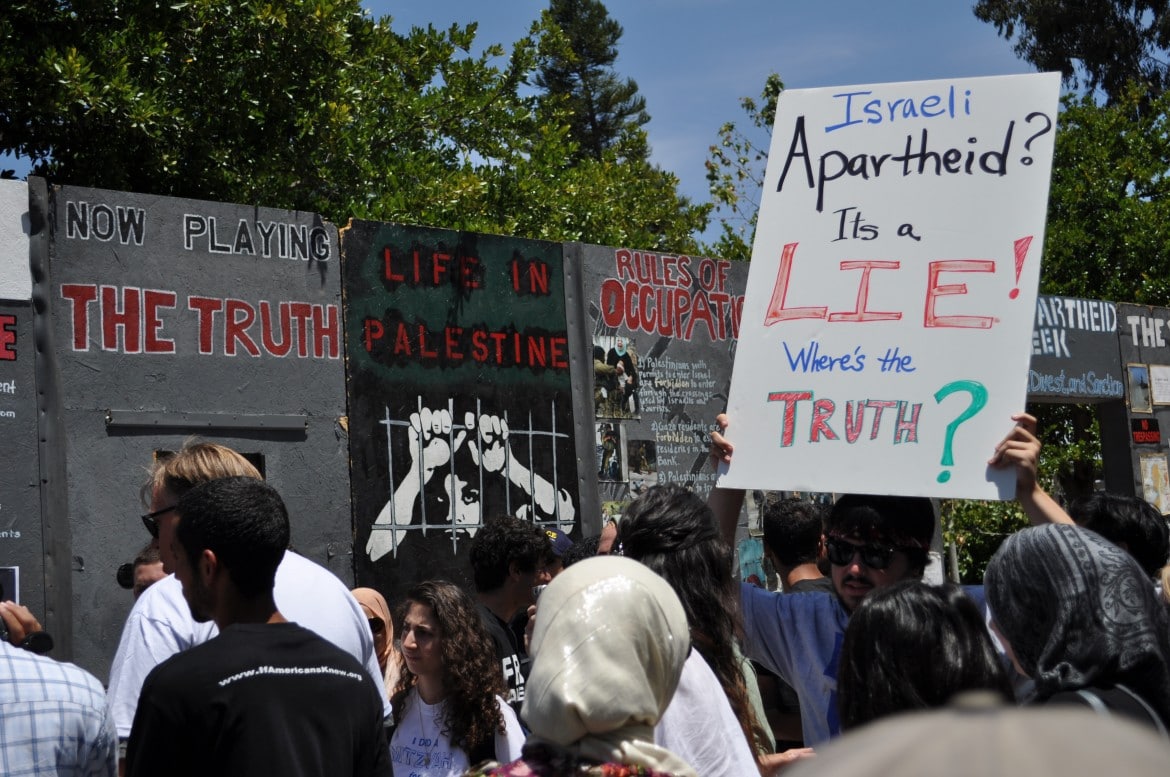 Protesters on the UC Irvine campus in May. (Photo by: Adam Elmahrek)

The proposed one-year suspension of the Muslim Student Union at UC Irvine for its involvement in the masterminding and orchestration of the sequence of shouted interruptions to a speech by the Israeli ambassador in February raises two important First Amendment issues.

The first issue is whether the students were entitled to do as they did as an exercise of constitutionally protected speech. The second assumes that the students had no such right and that the university, as a government agency, is authorized to discipline them. That question is whether suspension of the MSU is justifiable in fairness to its officers or members.

As to legal protections for the speech interruption, it was quickly claimed in some quarters that the students were exercising their First Amendment right to protest. The California Supreme Court has indeed held that there can be, in effect, a constitutional right to heckle, but not where it intentionally brings a meeting to a standstill and violates standing rules or customs, known by the audience, for gatherings of the type in question.

In In Re Kay, 1 Cal. 3d 930 (1970), the court concluded that hecklers at a congressman’s speech given at a 1968 Fourth of July celebration and picnic in a public park in Coachella should not have been prosecuted for violation of the nearly century-old Penal Code Section 403, which stated: “Every person who, without authority of law, willfully disturbs or breaks up any assembly or meeting, not unlawful in its character, . . . is guilty of a misdemeanor.”

The court held that this statute was constitutional only if interpreted to mean that “participants at a meeting may express disagreement but must not violate explicit rules or implicit customs and usages, pertaining to the meeting, of which they knew or should have known; such activity, when it is intentional and when it substantially impairs the conduct of a meeting, violates section 403.”

Anyone watching the video of the speech that I saw would have to conclude, as did the university’s investigation of the incident, that the disruption was deliberate, coordinated, actually effective in thwarting the speech as planned, and in a context where the rules of courtesy for guest speakers were repeatedly emphasized by the ambassador’s faculty hosts. In Re Kay is not likely to help these students and probably strips them of any First Amendment defense.

But is the suspension of MSU overkill? The investigation produced evidence spelled out in the final action letter and uncontradicted by any facts or arguments submitted to it (or produced elsewhere, so far as I can discover) that the students were simply agents of the MSU in its effort to shut the speech down, and that the plan to do so was ratified by all officers and members present at the meeting that launched it. Thus suspension for some substantial period does not seem unjust to the organization as an organization whose fingerprints and DNA are all over what was done.

And as for denying uninvolved Muslim students a voice or a forum for association and expression, I’m not sure why they need a university-licensed organization for that purpose. It may bring certain political or bureaucratic perks, conveniences and advantages — particularly for those wearing its badges of leadership — but it certainly provided no shield for the students it sent to the February meeting with scripts to shout, and given the disciplinary consequences they may face, it did them no favors.

Muslim students are free to speak to power for themselves, to caucus when and where they please, and if they need a more formal and structured apparatus, to organize a new association and seek recognition from the university as such. The one thing that, in their own interest, they should not do is act powerless or voiceless without the MSU.

Terry Francke is general counsel for Californians Aware and is Voice of OC’s open government consultant.