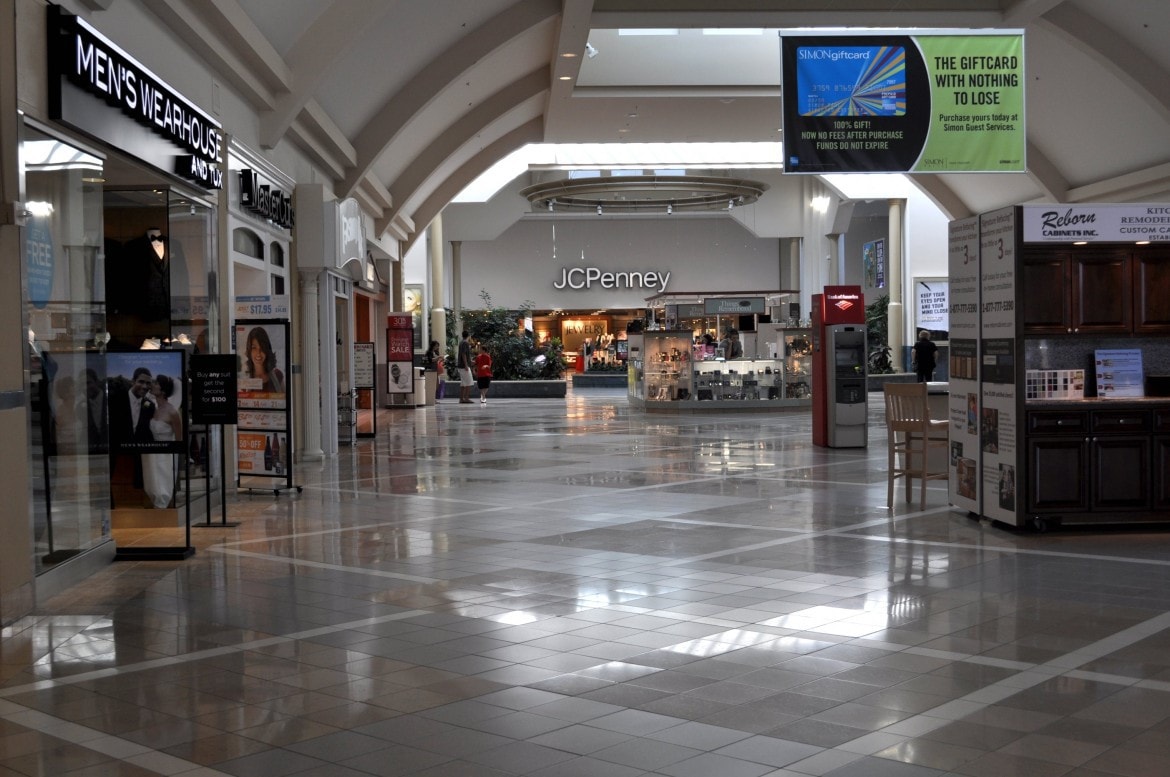 A corridor at the now empty Laguna Hills mall. . (Photo by: Adam Elmahrek)

Monday, August 2, 2010 | They sit across from each other on Crown Valley Parkway in Mission Viejo, but in important ways the Shops at Mission Viejo and the Kaleidoscope Courtyards are miles apart.

The Shops at Mission Viejo has established itself as one of the top shopping destinations in Orange County — tripling its sales tax revenue since the 1990s. Kaleidoscope, meanwhile, went into foreclosure and was sold last month for $22 million.

The law has tightened since both projects were approved in the early 1990s, and neither could be built under the same auspices today. They are conversation pieces in an ongoing debate regarding redevelopment as public policy — when it should happen or whether it should happen at all.

A redevelopment agency works by funding development projects through public debt. Developers use public money — essentially a free loan — to build and repair infrastructure and make cosmetic fixes to the city’s identified project area. Then, if everything goes as planned, property values rise and the increased property taxes are used to pay off the debt.

When things go according to this plan, blighted neighborhoods are revitalized and everybody wins. But that doesn’t always happen. There are many stories of agencies either failing to produce their promised results, or worse, becoming hotbeds of corruption.

The bad outcomes have led to a tightening of redevelopment law in recent decades, with stricter definitions of what can be considered blight. In 1994, California Assembly Bill 1290 tightened up the legal definition of blight, requiring at least one physical and one economic condition of blight. Such conditions include, among other things, unsafe and dilapidated buildings and a proliferation of businesses thought to attract crime, such as liquor stores.

By 2007, the law had been tightened up further and the public was given 90 days — 30 days longer than before — to file a lawsuit challenging blight findings. Also, authorities like the state attorney general now have explicit opportunity to file lawsuits against redevelopment plans.

John Shirey, executive director of the California Redevelopment Association, said the association sponsored AB 1290 because it wanted to protect redevelopment from the common abuse associated with it.

“If we didn’t reform ourselves, others would have done it for us — and it might have been done with a meat ax,” Shirey said.

Projects in South Orange County, specifically the two malls in Mission Viejo and one in Laguna Hills, show how these reforms have played out at the street level.

Most cities in South Orange County are wealthy and relatively new. Their buildings are in good shape, and their crime rates rank them as some of the safest cities in the nation. But over the decades, even these affluent cities have seen local governments declare areas too blighted for the private sector to fix on its own.

Mission Viejo is a case in point. The city had formed a redevelopment agency and identified its project area in 1993, so both mall projects were grandfathered in and avoided the new restrictions, according to redevelopment attorney Celeste Bradey.

To kick start the Kaleidoscope project, the city agreed to fund the widening of the Crown Valley/5 Freeway interchange to the tune of $2 million through its redevelopment agency.

City officials say that the widening would have happened anyway. Freeway interchanges are normally the fiscal responsibility of CalTrans, but the agency was dragging its feet to make the improvement.

“CalTrans didn’t have the funding. We would probably still be waiting for the project to rise up on the state priority list,” said Mission Viejo City Manager Dennis Wilberg. “They were just as cash strapped 20 years ago as they are now.”

Yet right across the road city officials argue is a redevelopment success story.

The Mission Viejo mall underwent a massive renovation — estimated at about $150 million — and reopened in 1999 as the Shops at Mission Viejo. The city’s redevelopment agency contributed $25 million toward that project, according to Wilberg.

The renovation added a second floor and brought in newer, more elegant stores, and a refined ambiance. Bradey said before the mall reopened, its stores spaces were 70 percent vacant. And according to city officials, the mall went from bringing in about $1 million in sales tax to around $3 million today.

The question of whether Mission Viejo’s leveraging of its redevelopment agency constitutes abuse doesn’t have a clear answer. Shirey said he couldn’t speak to the issue, and Bradey declined to give any redevelopment opinions.

One Less Tool in the Toolbox

For those cities in South Orange County that want to repeat a Shops at Mission Viejo success story, tighter redevelopment law has probably taken the public option away from them.

The Laguna Hills mall, which saw customers vacate en mass when the Shops at Mission Viejo opened, has been in a state of decline. The second level of the mall, which consists mainly of a food court, is filled with shuttered restaurants; only a few remain open. A B. Dalton bookstore on that floor also closed this year.

Simon Property Group, the mall’s owner, declined a request for an interview but sent Voice of OC a statement saying there are no plans to renovate the Laguna Hills mall.

Laguna Hills Assistant City Manager Don White says the mall would not be able to qualify for redevelopment under the law’s current restricted definition of blight. But he also insisted the mall doesn’t need redevelopment.

White blamed the mall’s declining revenue, which he said has seen a drop from $1.8 million to $1.5 million over the last few years, on the sluggish economy.

Laguna Niguel City Manager Tim Casey said his city, a South Orange County city that never activated a redevelopment agency, had been toying with the idea of starting one to deal with an area known as the Laguna Niguel Gateway, an aging 300-acre light industrial and commercial area that seems to be on the decline.

Under redevelopment law today, Casey believes the Laguna Niguel Gateway could qualify as a blighted area, but the findings would be “very narrow.”

Instead of going through the onerous process of public hearings and blight determinations required to leverage a redevelopment agency, Casey said the city has decided to try a different route — broadening the land-use zoning to allow more uses, mixing commercial with medium- to high-density residential.

Doing so, Casey said, could encourage property owners to “move to a better use” of their property. Because the area sits at freeway level — below most of the community — Casey says building heights can reach 60 to 80 feet without issue. That allows for a higher-density, unique part of the city.

If the plan doesn’t work and the city tries for a redevelopment agency, then Laguna Niguel would be doing something rare in South Orange County — declaring a redevelopment project after the law had been tightened up.

Casey said redevelopment, if properly used, can be an effective tool.

“I think the state is better off with it — as a tool properly exercised — than without it at all,” Casey said.

Correction: Due to inaccurate information provided by Mission Viejo City Manager Dennis Wilberg, a previous version of this story inaccurately stated the sales tax revenue of the Mission Viejo mall before it was renovated. 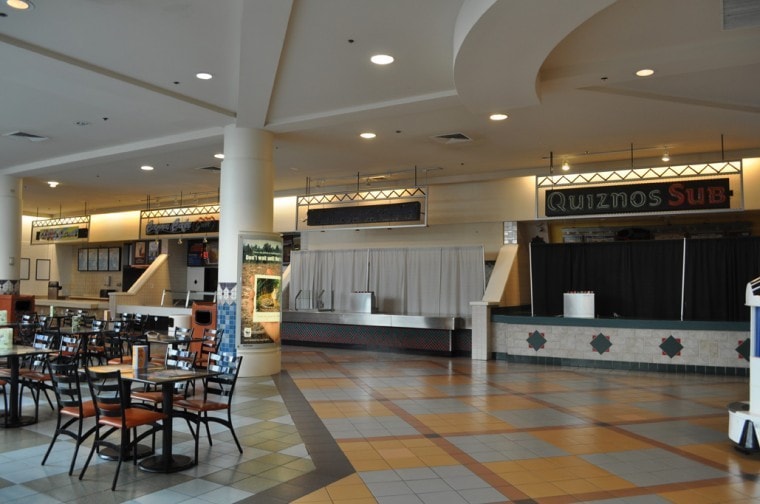