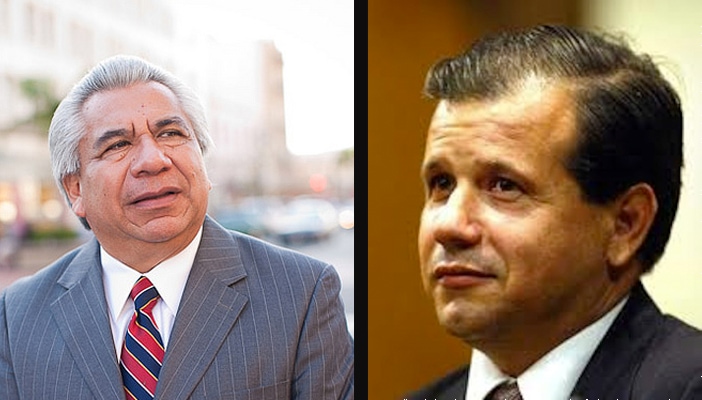 Santa Ana Mayor Miguel Pulido, right, and Alfredo Amezcua are squaring off against each other in the November mayoral contest.

Attend a Santa Ana City Council meeting these days, and you get the sense that you are at a well-scripted play rather than a public meeting.

Issues, projects and other city business come up as they do at any city council. But rarely does the council discussion seem spontaneous.

That tendency was on full display earlier this month when council members had to recast a series of votes now deemed illegal because of individual conflicts involving campaign contributions.

During an awkward session, a varying collection of council members announced conflicts and danced off the stage temporarily while votes were recast.

“It’s no different than Bell,” said 62-year-old longtime Santa Ana resident Peter Katz as he sat in the audience at a recent meeting. Katz, of course, is referring to the scandal-rocked city of Bell in Los Angeles County.

Such comparisons have become somewhat commonplace from Katz and other council watchers, who, fairly or not, have taken to referring to their city as “Bell South” or “Baby Bell.”

Garnering the most criticism in this context is Mayor Miguel Pulido, who is serving his eighth two-year term as mayor. Since being elected to that post in 1994, Pulido has put together a formidable political operation.

He’s favored to win a ninth term in November. But his challenger, local attorney Alfredo Amezcua, is banking on the idea that in the year of Bell, the people of Santa Ana will take a more skeptical view of the Pulido machine.

“It is unacceptable. It’s shameful,” said Amezcua after that recent council meeting. “This is some of the inappropriateness that we are allowing as a community.”

The city’s attorneys say the law has been broken so many times that it has become virtually unenforceable — to sanction anyone would trigger massive development delays and lawsuits.

It all leads Amezcua to conclude: “There’s a lot of pay to play. It’s obvious.”

Amezcua has a decades-long track record of civic activism in Santa Ana going to back to the days when Latinos were a rarity in political circles. And even though today’s City Council is all-Latino, Amezcua said it still often leans against the community because of financial interests.

“We need to keep their feet to the fire to make sure we have honest decision making,” Amezcua said.

This rhetoric is right out of the challenger’s playbook, especially when the foe has a long tenure in office and an impressive list of accomplishments. And rarely do they come as long tenured, or as accomplished as Pulido.

Pulido is the longest-serving mayor in Orange County, having first been elected to the Santa Ana City Council in 1986. And his is a uniquely American story: a Mexican-American muffler shop owner who fought City Hall over their redevelopment plans — and won.

Few would argue with the statement that there’s not a business or political move in town that doesn’t have Pulido’s imprint.

He’s a pro-business Democrat with numerous housing and commercial projects underway in the city’s aging downtown district, called the Artists Village. He’s overseen large investments in local schools and expanded street repaving programs while other cities are cutting back.

He’s also brought in the Cal State Fullerton graduate arts program to the Artists Village, and even facilitated the relocation of the Orange County High School of the Arts into Santa Ana.

Pulido led the effort to locate the Discovery Science Center in the city’s museum district and successfully lobbied for the construction of the Ronald Reagan Federal Building and the state Court of Appeals in Santa Ana. He’s also been a force on the Bowers Museum Board of Directors in fundraising for large expansions.

Over his many years in public office, Pulido has garnered an intricate network of political friends, in all sorts of places. In fact, gubernatorial candidate Jerry Brown is a close friend.

Those kinds of connections are key, say Pulido backers, to keep the money flowing into town.

Yet critics accuse Pulido of mastering the art of politics too well.

They allege Pulido has enriched himself over the past few decades as a government consultant with ties to numerous business entities doing deals throughout Orange County.

Earlier this year, Pulido was called out by an Orange County grand jury for arranging a $5 million contract for a company named Cordoba for a Santa Ana streetcar line.

It was also disclosed that Pulido hired his own brother, who also works in the family muffler shop, as an environmental adviser for his role on the South Coast Air Quality Management District.

That’s the same agency that Voice of OC found also was giving Pulido a free car while city taxpayers paid him a car stipend. Pulido also has multiple agencies paying his health insurance, Voice of OC has found.

Pulido has never been media friendly, despite being married to a former Orange County Register reporter. He rarely agrees to interviews and is known in the Orange County press corps as rarely returning reporters’ phone calls.

He did not respond to several calls for comment on his mayoral election campaign.

From First Fundraiser to Opponent

Amezcua has spent decades in Santa Ana and was a longtime Pulido supporter who recently grew disenchanted.

When Pulido first ran for mayor, Amezcua said he and his mother hosted Pulido’s first fundraiser. He said both were excited about getting a Latino on the council and had high hopes at first.

“At that time, it was the right time for someone like Miguel,” Amezcua said. “But he has lost the inspiration, the context. He’s forgotten who elected him.”

If it were a fundraising race alone, Amezcua would already have it won.

Numerous observers were surprised last week when official disclosure reports revealed that Pulido entered the last month of the campaign with $8,400 left in campaign coffers. That compares with more than $85,000 for Amezcua.

Amezcua says Pulido is on the wrong side of history this year.

The City Council’s recent errors on critical development votes — and their subsequent inability to correct their votes because of lawsuit threats — just illustrates the loose culture at City Hall, Amezcua said.

“That tenor is set by the mayor.”

“There’s never been an in-depth analysis of all the activities that Mr. Pulido has been involved in. The family business, having projects in the city, having side partnerships in other cities,” Amezcua said.

If there were such an analysis, Amezcua said, it wouldn’t be pretty.

“If relationships were the formula to bring about the best for a city, we wouldn’t be where we are today. There’s something wrong with that picture.”

But relationships are exactly what have kept Pulido in office for the better part of two decades, and they are why most observers say he is the favorite again this year.

An exchange at the Memphis restaurant last week displayed the power of Pulido’s relationships.

In a conversation about the election, a local businessman actively involved in city affairs (and who didn’t want to be identified) said he was fully aware of the taint of impropriety that has followed a good number of Pulido’s dealings.

But when asked for whom he’ll cast his vote, he didn’t hesitate.