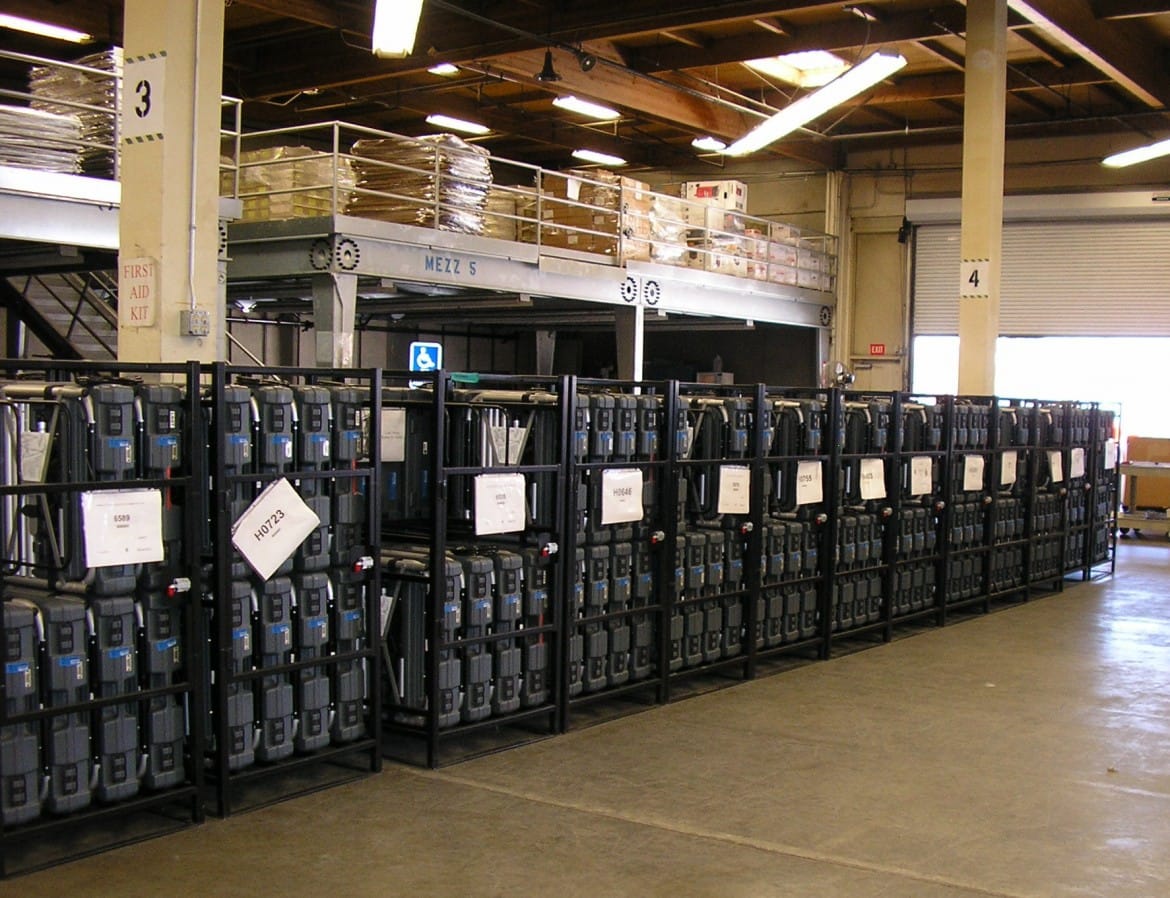 Voting machines at the Registrar of Voters Office wait to be trucked to polling places across Orange County. A new system determines likely voter turnout and allocates more -- or fewer -- machines to individual precincts. (Photo by: Tracy Wood)

Monday, November 1, 2010 | Voters who go to the polls Tuesday will benefit from months of work intended to make sure they have enough voting machines and volunteers, according to Registrar of Voters Neal Kelley

Just in case Kelley is overly optimistic, watchdogs from the Orange County Federation of Labor will check traditionally crowded polling places and alert officials if machines break down or if unusually long lines threaten to send potential voters home.

Officially, the two organizations aren’t working together. Tefere Gebre, executive director of the labor federation, said: “I like Kelley. He’s a good guy.”

But Gebre said he doesn’t want a repeat of what a happened in 2006 when, he said, two machines in a Santa Ana precinct broke down.

“We were calling all day long, and they never took care of it,” Gebre said. At 8 p.m., when the precincts closed, the line was so long it took until after 10 p.m. for everyone who stayed to vote, he said.

A council race that year was decided by about 200 votes, Gebre said. With races that close, he said, major breakdowns could affect outcomes.

“It’s hard to tell people it only takes 10 minutes to vote and they go and it takes two hours,” he said.

Kelley, who took over as registrar in 2005, says there weren’t many complaints in 2006, but even so, life at the polls has changed so much in the past four years; the difference in equipment and how the registrar’s staff responds to problems is “night and day.”

“There’s not a county in this state that’s doing it like we’re doing it,” he said. “I changed the process substantially from 2006.”

Before then, he said, the way machines were distributed “didn’t make much sense.”

During the last gubernatorial election and prior to that, each polling place received eight machines, no matter how many voters in that precinct traditionally turned out.

Kelley said that now precincts get four, six, eight or 12 machines, based on prior turnout.

The new system was tested during the 2007 off-year elections and then deployed in the 2008 general election. The outcomes, he said, were “right on the money.”

Each machine can handle 150 voters. To determine how many of the county’s 10,000 machines go to each of the 1,210 poll sites, he said, previous voting patterns are minutely analyzed.

For example, machines closest to the entry get the most use. By knowing where each machine was placed and looking at the number of votes cast on it, analysts can determine if there were enough or if more are needed.

In Orange County, traditionally the lowest number of voters turn up at polling places in South County and the most in North County, particularly the central areas of Anaheim, Santa Ana and Fullerton, Kelley said.

The lowest number of voters to show up in a single precinct has been about 60 and the highest around 900.

Planning for this election began in February, Kelley said, and a total of 7,000 poll workers and other staff will turn out on Election Day to make sure things run smoothly. Training for poll workers began in September and will end tonight. For weeks, trucks have been delivering voting machines to polling places.

By the time the first voter hits the polls at 7 a.m. tomorrow, all should be ready.

Even so, cautious observers speak of the unpredictable, especially Florida in 2000 when “hanging chads” kept the nation from learning for 36 days who would be its next president.

Orange County voters, like those across the nation, increasingly are casting their ballots by mail.

Kelley said the highest concentration of absentee voters are in South County, but more and more ballots in the north also are coming in the mail.

This June, for the first time in a major election, more Orange County voters cast absentee ballots than went to the polls, according to statistics on the Registrar’s website.

Kelley said it has happened before in small, special elections. Overall, he said, the percentage of voters casting ballots by mail has been increasing since 2002.

On Tuesday, Kelley said he expects 53 percent to 55 percent of the county’s eligible voters to turn out, either in person or by mail.

Because of the changes instituted after the 2006 election, Kelley said there were no complaints in 2008 about excessively long lines.

But based on what he saw in 2006, Gebre still worries. “It was unbelievable” at the precinct with the broken machines, he said. “The last person voted at 10:20 p.m.”

In addition, he said, some polling places, like those at fire stations, can have parking problems. Parking is prohibited in areas that would interfere with emergency vehicles, but it also makes it difficult to get in to vote in some areas, he said.

In addition, this year, his group will have volunteers out looking for problems. When they spot something that needs to be fixed, like a broken voting machine, Gebre said there is a hotline they can call and members of the Orange County Labor Federation will let the Registrar of Voters Office know about the problem.

“God willing,” he said, “they’ll come fix them right away.”

Kelley’s ready. The comparison between 2006 and today, he said, “is hard for me to even make.” 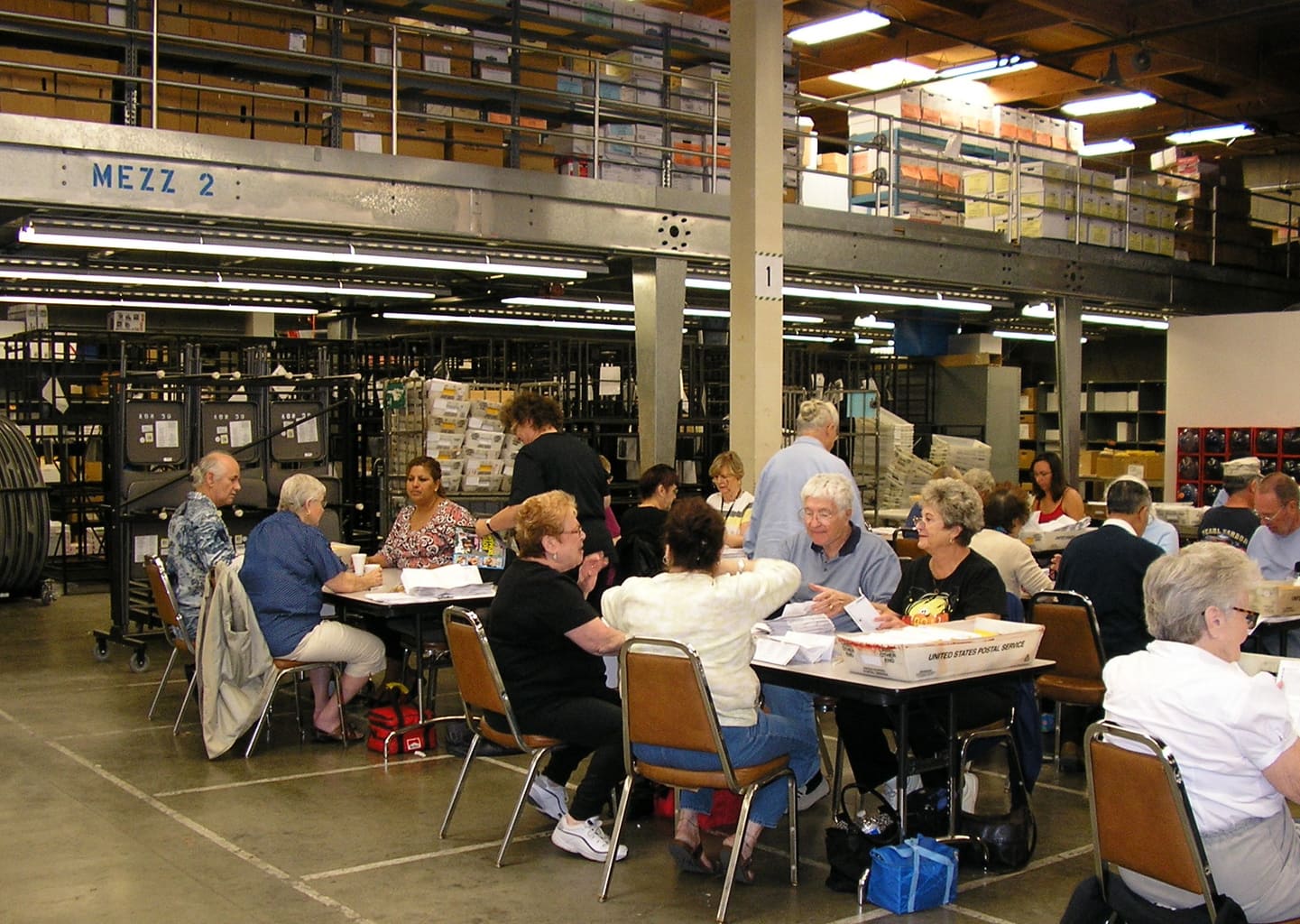 Election workers, pictured last week at the Registrar of Voters headquarters, prepare absentee ballots to be counted when the polls close at 8 p.m. Tuesday. (Photo by: Tracy Wood)