After Carole Moss’s 15-year-old son died of an infection in 2006 in a Children’s Hospital of Orange County facility, she launched a one-woman crusade to force hospitals throughout California to reveal how many of their patients contract serious infections.

“People are dying, and we’re being kept in the dark,” became her mantra as she marched the hallways of Sacramento to push a 2008 public disclosure law, called Nile’s Law, after her dead son.

She won. As of Jan. 3, for the first time, California health consumers will gain the power to click on a state website and scrutinize the infection rates of their local hospitals — rates that Moss believes she should have been told about before taking her son for treatment.

The stakes are huge. Hospital-acquired infections kill an estimated 13,500 California hospital patients each year, according to a 2009 state report. That’s more than four times the number of people killed in state traffic accidents last year.

In all, an estimated 240,000 patients statewide develop infections in hospitals annually and require extra care, costing an extra $3.1 billion.

Even as Jan. 3 nears, however, Moss and other consumer advocates are sharply criticizing state officials for what they say is an inadequate response to the new public reporting law.

The state has long lagged other states in disclosing publicly — hospital-by-hospital — the rates of certain infections that patients acquire during treatment. Many other states have also embraced simple checklist procedures that produced dramatic declines in the incidences of hospital-acquired infections.

“Stepping back, we have not had strong leadership in California in support of patient safety improvement and reporting,” said Elizabeth Imholz, director of special projects at the San Francisco office of the nonprofit advocacy group Consumers Union, which publishes Consumer Reports.

Imholz blames what she calls a strong and recalcitrant hospital lobby and foot-dragging by the Department of Public Health, which she says worries more about perfecting the data than getting word out to the public.

The health department admits this project has been difficult. “We acknowledge that there were challenges in starting up this program,” said spokesman Ralph Montano. “We have made up a lot of ground in the past year, and we’re going to continue to move forward.”

Hospital officials deny that they’ve tried to delay public disclosure and say that behind the scenes, California hospitals have made significant progress in recent years reducing infection rates. But only now will the public be allowed to see the hospital-by-hospital accounting.

Moss continues to be the prime catalyst. She uses her seat on a key oversight panel to prod and push for swifter action.

State health officials disagree. They say they’ve been hobbled by severe budget cuts and staff furloughs, as a result of the budget crisis in Sacramento, and the difficulties of prying infection data from some hospitals that are in no hurry to reveal their mistakes. As of last week, up to 20 percent of the state’s hospitals still had not submitted some or all of the required data, according to a Dec. 16 memo.

Infections and other hospital errors first entered the national scene in a big way with a seminal 1999 report, “To Err Is Human: Building a Safer Health System,” published by the Institute of Medicine of the National Academies of Science.

That finding grabbed the attention of the medical world and accelerated the U.S. patient safety movement. In 2004 the California Legislature passed a bill that would have placed the state in the vanguard nationally in infection reporting.

Gov. Arnold Schwarzenegger vetoed the bill, saying that sufficient oversight was already in place. Even when the governor later signed a series of strong patient-safety laws, advocates say, state officials failed to enforce them with the urgency required to save lives.

The California Hospital Association opposed the 2004 legislation and said it took a neutral stance on the 2008 Nile’s Law, but spokeswoman Jan Emerson-Shea said that doesn’t mean the hospital association opposes disclosure. “We support public reporting,” she said. She added: “You need to make sure that any data you’re reporting out to consumers is scientifically valid.”

The story of Nile’s Law sheds light on a festering problem long invisible to most hospital patients. It also shows how reformers inside and outside the medical world are forcing hospitals to own up to an unhappy side of the high-technology medicine that is a hallmark of U.S. healthcare.

Too often, the sophisticated machinery is defeated by sloppy practices and workers stretched beyond their limits while caring for the sickest patients. Unwashed hands and unsterile equipment are among the leading transmissors of infection, research shows.

Patients can die when bacteria enter their blood via the very chest tubes that feed and medicate them and keep them alive. Some, like Nile Moss, develop MRSA, or methicillin-resistant Staphylococcus aureus, a kind of staph infection resistant to antibiotics.

Children’s Hospital of Orange County officials did not respond to a request for comment on his case.

Until Nile’s Law, the state had no power to make hospitals turn over data revealing how many patients were sickened by those infections.

Five years ago, only two employees handled hospital infections for the California Department of Public Health. Today, that has grown to 19, including nine infections specialists who work with hospitals around the state.

The department’s expansion came slowly. Funding for their new infection program did not begin until December 2009, officials said, stalling the hiring of monitors until last January.

The advisory panel overseeing the program was placed on hiatus for more than 14 months, only resuming work in late May.

Hospitals began submitting data in 2009, but records sat in storage until March 2010, when employees were on hand to start evaluating them, state records show.

Other problems have surfaced in the reporting:

The good news is that at a number of facilities in California and elsewhere, hospital officials say infections have dropped significantly because of programs spearheaded by safety experts and the hospitals themselves.

Some of the biggest gains have come in reducing an especially lethal problem, caused when tubes inserted to feed and medicate patients transmit bacteria into the body.

These tubes are used on 48 percent of patients in intensive care units, where patients are already weak and susceptible, according to the Institute of Medicine.

As many as 28,000 patients may die nationally of line infections each year, costing up to $2.3 billion annually, some leading infection experts have written. Many of these deaths can be prevented, they say, with basic steps such as regular handwashing, using antiseptics correctly and removing lines promptly.

Hospitals in some regions of California have formed collaboratives and are tackling these and other infections.

In the San Francisco Bay Area, for instance, 38 hospitals teamed up nearly six years ago and have seen the rate of line infections drop sharply.

“We saw dramatic results very quickly, and we sustained the results over time,” said Dr. Bruce Spurlock, executive director of clinical acceleration for the Bay Area group known as BEACON.

But most such collaboratives keep infection data private. Activists believe that in many cases, the chief executives of poorly performing hospitals will push for infection-free facilities only if they are embarrassed by public reporting.

The California watchdog Little Hoover Commission has urged health officials since 2003 to report infection data, and that hasn’t changed.

“They have not been as aggressive as we’d like in pushing the adoption of policy and public reporting,” said commission Executive Director Stuart Drown.

“We understand there are costs involved and cultures that need to be changed in large healthcare organizations. But there are lives to be saved.” 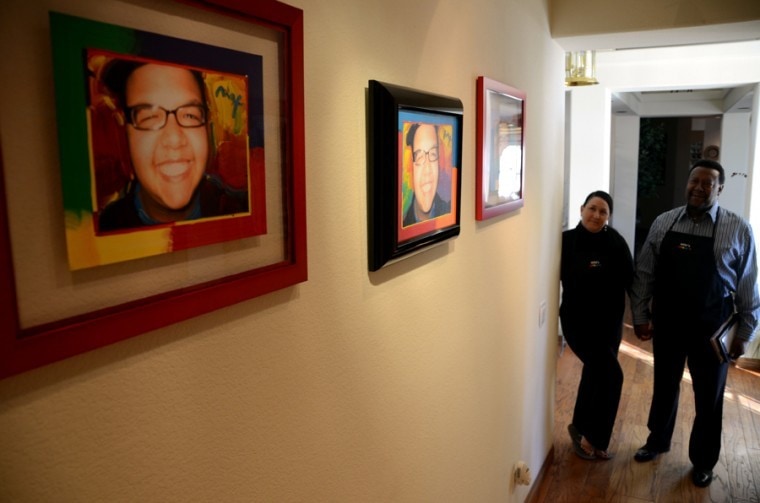 Carole and Ty Moss lost their son, Nile, in 2006 to an infection called MRSA. (Photo by: Lauren M. Whaley)