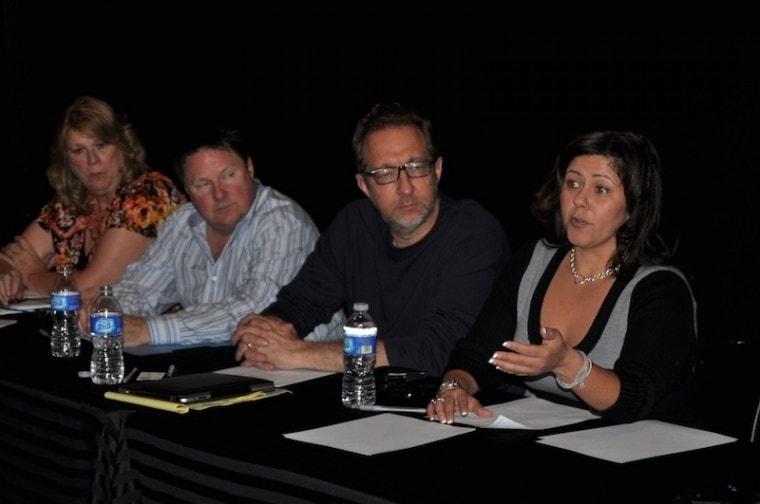 Friday, January 14, 2011 | Tired of feeling put on, left out and not listened to by Santa Ana’s powers that be, a group of artists who make their living in the city’s downtown Artists Village began speaking out late last year.

The artists spoke loudly of their worries that a vibrant downtown that they helped create is becoming increasingly gentrified and leaving them behind.

This month, the powers that be started listening. And they even apologized.

“Just forgive us for not being better communicators,” Downtown Inc. Executive Director Vicky Baxter told the artists during a Jan. 6 meeting at the Cal State Fullerton Grand Central Art Center.

The town hall meeting was one of two recent gatherings city officials attended with the hopes of improving communication with the artists. It was hosted by Baxter, Downtown Inc. Board of Directors President Bob Stewart, Police Commander Ken Gominsky and Councilwoman Michele Martinez. Another artists forum this week was hosted by Community Development Agency department head Cynthia Nelson.

However, while the artists are appreciative of the increased communication, it has not changed their belief that the city and Downtown Inc. exploit their name to make the area trendy and increase property values, but do little to help the artists sell their art and survive.

“Things are still very much up in the air,” said Matthew Southgate, an artist who tends a gallery in the Santora building on Broadway. The artists “just want to make sure we’re included in the boom and not pushed out.”

The town hall meeting also revealed a schism among the artists over how to deal with the city and Downtown Inc. Some said artists would simply have to transition with the changing environment and adjust to changing consumer demands.

“Downtown Inc. can’t do everything,” said Javier Saenz, an industrial designer who works out of his loft on Bush Street. “My work has to change.”

They also disagreed over different programs, including what some of the artists say is a largely ineffective force of security guards paid for by Downtown Inc.

Members of a recently formed group called the Artists Village Alliance of Santa Ana, AVASA, spoke against the security guards. Other artists and stakeholders defended their presence, saying they are a step up from the quality of security guards in years past.

“Nowadays it’s different — they don’t sleep in the car or play trumpet in the back parking lot,” said Andrea Harris, founding director of the art center.

Although Baxter was eager to make amends with the artists during the town hall meeting, she also took issue with some of their assertions.

At one point in the meeting, Baxter repudiated an AVASA contention that Downtown Inc. doesn’t market for the artists, saying, “I keep hearing we’re not advertising — and we are.”

Baxter said Downtown Inc. spent $3,500 on ads in a magazine known as Art Scene. She then said that all of the negative pushback made her “a little reluctant to call in favors” from magazine connections she had made while working a marketing gig in Yountville in Napa County.

To that charge, AVASA artist Alicia Rojas responded: “The fear and angst comes from a lack of communication.”

Stewart said that the communication was just now starting because it took a year to “really get this thing together.” Stewart promised that there would be more going forward.

“Growing pains,” an exhausted Baxter said at the end of the town hall meeting. “These are growing pains.”