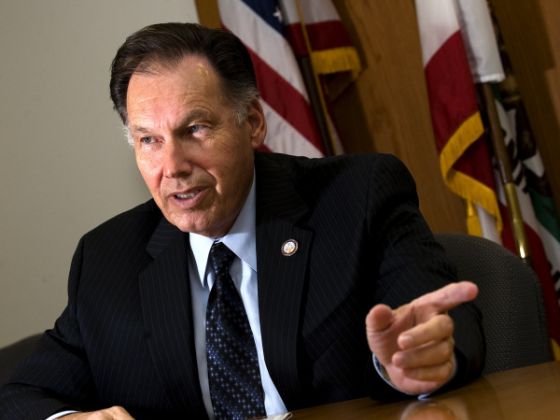 Wednesday, February 2, 2010 | Last October, when District Attorney Tony Rackauckas cleared former State Senator Dick Ackerman of any illegal lobbying on the proposed sale of the Orange County Fairgrounds, his report stated that Ackerman didn’t violate a state ban on lobbying former colleagues because “his contact was not with state legislators.”

Yet detailed legal billings, submitted by Ackerman’s law firm to the Orange County Fair Board and obtained by Voice of OC, show that the former legislator contacted several members of Orange County’s delegation to the state Legislature before and after key votes in July 2009 that authorized the sale of the fairgrounds.

The report stated that Ackerman — who was secretly hired by the Fair Board shortly after former Gov. Arnold Schwarzenegger put the fairgrounds and other state assets up for sale in 2009 — did make contact with the governor’s office and agencies regarding the fairgrounds, but did not engage in lobbying.

The report went on to say, even if his contact with these officials were to be construed as lobbying, he was not violating the law because “as a former legislator, Mr. Ackerman was only precluded from “lobbying” “other members of the State Legislature.”

But the report made no mention of conversations that Ackerman’s own billing records show he had with legislators from Orange County days before and after they voted to sell the fairgrounds on July 23 and 24, 2009.

Ackerman’s law firm, Nossaman, submitted the bills to the California Construction Authority, the state agency used to hire Ackerman on behalf of the Fair Board.

The report also failed to mention that Ackerman’s contract with the Fair Board specifically mentions that he was to be “liaison with state elected officials.”

A state law passed by voters in 1990 prohibits former state lawmakers from lobbying their former colleagues for one year after they leave office. Ackerman was a state senator from 2000 through 2008.

“It sure looks like he’s lobbying,” said Jessica Levinson, an attorney in charge of political reform efforts at the Los Angeles-based Center for Governmental Studies.

Ackerman has not responded to several phone calls over the past months seeking comment on his role in the fairgrounds sale.

Rackauckas Chief of Staff Susan Kang Schroeder defended the report, but would not specifically discuss the newly revealed records.

“The evidence we had supports the findings we made,” she said. “If anyone has further evidence that is contrary to the evidence we have, we’ll be glad to look at it. And it may bring us to a different result.”

State Senator Lou Correa and State Assemblyman Jose Solorio — who are now suing to stop the sale — both remembered that Ackerman had contacted them before their original vote. However, neither could remember the specifics of their conversation with Ackerman.

“With term limits, I can’t keep up with the new members let alone those that are termed out,” Correa said.

Solorio said Ackerman gave him updates on the situation with the fairgrounds and the formation of a non-profit to purchase the property.

“As legislators, we were just hearing what he had to say,” said Solorio, who noted that at later hearings on the fairgrounds sale in Costa Mesa, the role of Ackerman was tough to figure out and triggered many questions.

“My assumption was that he was doing whatever he could legally do. It wasn’t my assumption he couldn’t give us background on these items,” he said.

Both Correa and Solorio said the disclosures were “troubling” and would likely trigger further reviews, from agencies outside the district attorney’s office.

Ackerman — one of Orange County’s most senior Republican power brokers — was hired by members of the Fair Board sometime in 2009 to help them get control over the 150-acre property in Costa Mesa.

Their plan — to buy the property through a non-profit foundation — blew up soon after it was made public.

State officials are now trying to sell the property to a Newport Beach firm, Facilities Management West, with the aim of making the fairgrounds more profitable by packing in more events.

That deal has stalled after activists and several state elected officials filed suit. Hearings on the lawsuit were postponed until March so Gov. Jerry Brown can consider his options.

Activists and officials have long alleged that various groups trying to buy the fair have broken the law.

FMW has been accused of improperly using insider influence, chiefly through Gary Hunt, an Irvine company official who was a chief campaign finance fundraiser for Schwarzenegger and now works with California Strategies, which represents FMW in Sacramento and is also lobbying for the sale.

The District Attorney’s investigation, which began in late 2009, was prompted specifically by allegations of lobbying by Ackerman and conflict of interest allegations against Fair Board members.

The 47-page District Attorney’s report provides a chronological account of the fair saga and details Ackerman’s role in the process. But documents and interviews reveal that investigators either left out or failed to uncover key facts regarding Ackerman’s involvement.

For example, Ackerman’s own legal billings note that he called to just about every member of the Orange County Board of Supervisors about the sale. Yet the district attorney report only mentions two supervisors contacted, and doesn’t list them by name.

“This is another strong argument in support of the idea that local agencies like the county need a lobbyist registration law,” said Correa, who has sponsored such legislation this year.

Many players on the fairgrounds saga — key elected officials in Costa Mesa and the state — as well as dissident fair board members like David Padilla said Rackauckas’ investigators never contacted them for information.

Also missing from the District Attorney’s report are key components of the job contract Ackerman signed with the Fair Board.

For example, in their report, the District Attorney investigators mention four key things Ackerman was hired to do for the fairgrounds. They are:

However, according to a copy of Ackerman’s employment contract with the Fair Board obtained by Voice of OC, he was hired to do two other things that the District Attorney’s report does not mention. They are:

Ackerman’s hire date (hidden through a land use subcontractor to the fair board known as LSA Associates) is unclear because his employment contract is both dated October 28, 2009 (in type) and July 31, 2009 (in handwriting). The District Attorney’s report said Ackerman was hired in May.

Ackerman’s legal work for the fair board began as early as May 2009, according to his own billing records submitted to the Construction Authority.

The main contact in the governor’s office was Fred Aguiar, a former legislator from the Inland Empire who went on to become a deputy chief of staff to former Gov. Schwarzenegger.

By July, contacts with legislators begin.

On July 15, Ackerman reports having a phone conference with Solorio, the records show. That same day, he was on the phone to Republican Senate minority leader Dennis Hollingsworth.

Ackerman spoke with Correa on the phone on July 24, the records show.

The legislation authorizing the sale of the Fairgrounds was passed on July 23 and 24. On August 4, Ackerman reported separate phone calls to former Assemblyman Mike Duvall, along with Assemblyman Jim Silva, and Jeff Miller and Dianne Harkey.

Levinson of the Center for Governmental Studies said Ackerman’s efforts seem to sidestep the yearlong ban on lobbying.

“It’s the whole revolving door issue,” said Levinson. “You shouldn’t use your former position as a representative for your own personal gain to lean on your former colleagues.”

Please contact Norberto Santana, Jr. directly at [email protected]. And add your voice with a letter to the editor.