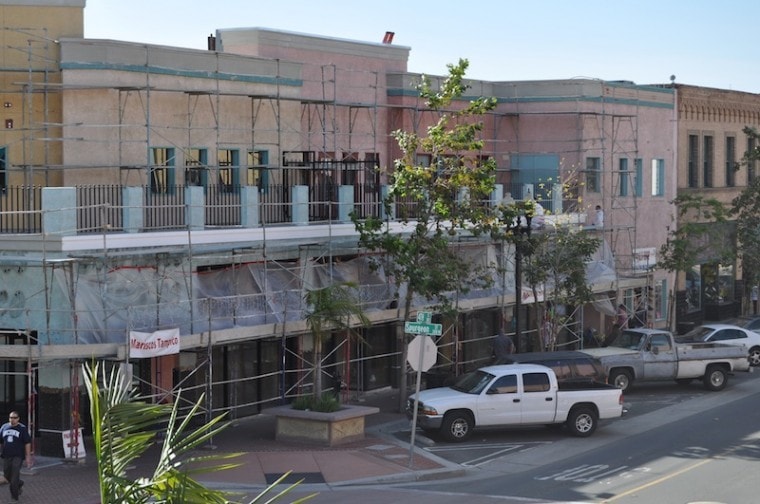 Facade work being done on Santa Ana's Fourth Street, where property owners are angry over an assessment tax. (Photo by: Adam Elmahrek)

Tuesday, March 8, 2011 | City officials in Orange County — like their counterparts throughout California — are racing to shield hundreds of millions in redevelopment assets as Gov. Jerry Brown’s plan to eliminate the state’s redevelopment agencies inches closer to reality.

Such maneuvering is becoming commonplace as local officials scramble to lock up redevelopment money before it is taken away from them. Brown’s bid to ax redevelopment agencies is one of a myriad of things he is proposing to close the state’s $25.4 billion budget hole.

If the agencies are done away with, as much as $5 billion in annual tax increments will be freed up for other uses, according to the administration.

Last week a legislative budget committee signed off on the plan, which shows the idea is gaining traction in Sacramento. This, of course, is making local officials more nervous by the day.

Generally, Brown’s proposal does not include taking revenue already dedicated to previous commitments, said John Shirey, Executive Director of the California Redevelopment Association, which is why cities up and down the state have been locking up future redevelopment funds.

No where is this more apparent than in San Diego where last week the city committed to $4 billion in redevelopment projects, a move that drew criticism from Brown’s office.

“It is unfortunate that cities across the state are rushing to commit hundreds of millions of dollars to redevelopment at a time when they are also considering cuts to core services in order to close large budget deficits,” Voice of San Diego reported Brown spokesman Gil Durán as saying in a statement.

In recent days, as language of the bill that passed the budget committee has circulated, cities like Huntington Beach are going beyond just making commitments to redevelopment and employing a new strategy of actually transferring property from the redevelopment agency to the city.

“People started realizing this is real — it’s not just something to think about,” Shirey said.

The bill calls for a successor agency with an oversight board comprised of officials appointed by agencies including schools, cities and counties. The successor agency could potentially liquidate property owned by the redevelopment agency.

So cities, like Huntington Beach, are transferring property to the city to make sure the assets aren’t sold “for pennies on the dollar,” Shirey said.

Santa Ana’s redevelopment situation is particularly troublesome. There are six redevelopment zones in the city that together cover thousands of acres. The projects range from affordable housing to a downtown parking garage — all would be at risk under Brown’s proposal.

“You can look at that window, and everything you see that looks decent was done with redevelopment,” Santa Ana City Manager Dave Ream told a reporter from the top floor of City Hall.

To save resources for their redevelopment projects, Santa Ana City Council unanimously voted Monday on committing $210 million in redevelopment dollars to the city. It remains unclear, however, how much of that money will be paid right away, and how much will be paid from future property tax increment revenue.

Among the projects underway or planned over the next five years are the Station District housing development, the Santa Ana Auto Mall expansion, the downtown facade improvement program and affordable housing rehabilitation and construction.

“It’s [redevelopment] important on a variety of fronts because you have low-income housing that we’re trying to put together, rehab areas that have run down apartments — and so forth — so that people have a decent place to live,” said Councilman Sal Tinajero.

However, perhaps no other county asset would be hit harder by the proposal than Irvine’s Great Park. Irvine City Council will be voting Tuesday on pledging an estimated $1.4 billion in future property tax increment revenue to pay for construction of the park.

City Council will also vote on the transfer of 35 acres of property — property that was the center of a complicated $134 million financing and loan agreement — back to the city.

However, officials in that city refused to characterize their proposed actions are part of an attempt to thwart Brown’s proposal.

Assistant City Manager Sharon Landers said the planned actions are to “effectuate” previous agreements to build the park. And actions like the land transfer, Landers said, is to “make good on obligations to payments on debt owed to the city.”