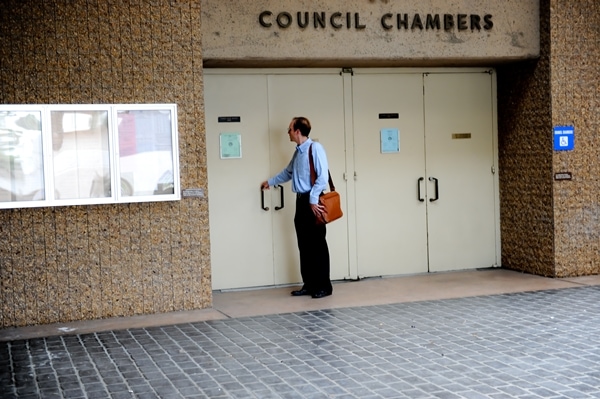 Closed-door meetings are allowed under a narrow set of exceptions to the Brown Act. The law requires, however, that members of the public be allowed to comment on all matters on the closed-door meeting’s agenda before council members discuss them.

To comply with the law, council members must convene publicly and ask for comments from the public before heading behind closed doors. Yet before and during Monday’s closed-door meeting, the doors to the council chambers were locked. Staffers told a Voice of OC reporter attempting to enter the chambers that council members always meet privately first.

This isn’t the first time the City Council has violated this particular requirement of the law. Voice of OC reported late last year that council members were meeting privately without giving the public a chance to speak first.

“They need to be presented with the situation squarely, so they can take whatever steps there are to hold the city manager or whoever accountable so these foul-ups don’t occur.”

City Clerk Maria Huizar said she had thought staff had unlocked the council chambers doors before the meeting. She said Mayor Miguel Pulido had called for public comments, thinking that the public had access.

“I’ll take the fall on that one,” Huizar said.

This wasn’t the only Brown Act problem at Monday’s council meeting.

The closed-door meeting was scheduled to be held in its usual place — behind double doors marked “employees only” — but was moved to a private conference room adjacent to the council chambers. There was no public notice of the change.

Francke said that was unacceptable.

“It warrants an official resolution directing staff to make sure that each meeting of the council is open under predictable and conspicuous circumstances, so that no one misses the opportunity — to which they’re entitled — to comment on a matter in closed session.”

City Attorney Joe Straka could not be reached for comment Wednesday morning.