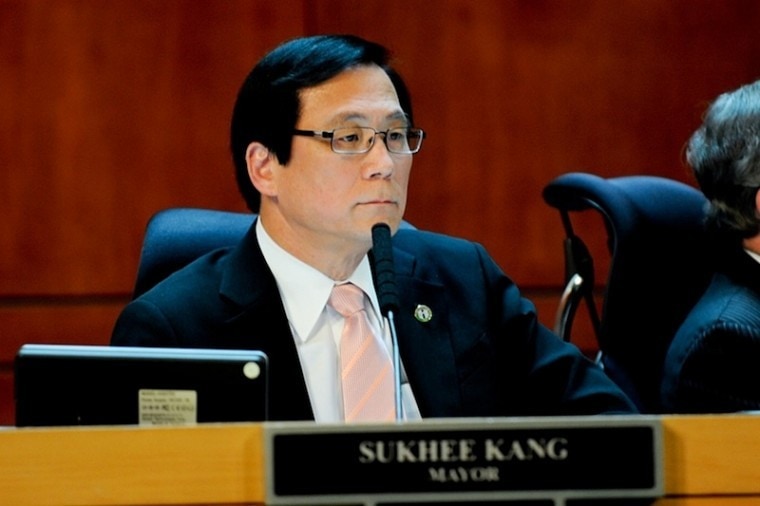 But it happened Aug. 30 when Democratic Mayor Sukhee Kang voted with the city’s two Republican councilmen to approve development for nearly 5,000 homes around the Orange County Great Park.

It was the first time in recent memory that Democratic Councilman Larry Agran, the high-profile council veteran seen as the majority leader, was on the losing side of a council vote.

The root cause of this fracture in the majority coalition is a difference in opinion between Kang and Agran over how to negotiate with the Great Park Neighborhoods developer, Heritage Fields El Toro, for up to $100 million in additional park money for the privilege of building the neighborhood around it.

Agran, reacting to the recession’s heavy toll on the residential construction industry and in turn the Great Park’s finances, wants the developer to promise all the money before the project is approved. Kang is content to let Heritage Fields promise to pay $40.5 million over the next six years and negotiate for the rest in the coming months.

“The methodology in how we get the money was a sharp difference between us,” Kang said. “Do you tell your partner, ‘Hey, I don’t trust you; give me the money’? I don’t believe that’s a good approach.”

Agran did not return phone calls for comment on this issue, but it is no secret that he does not want to give up the leverage that the City Council had by approving the project without getting something more substantial in return.

Kang, however, said he is confident that the city can negotiate for an additional $60 million from the developer without such leverage.

“Trust me,” Kang said. “You’ll be happy to hear what we’re able to accomplish in the next six to eight months.”

Whether the vote signals a change in the council dynamics is unclear. Kang said that one of his goals as mayor is always to seek a unanimous vote on council decisions. But he also said that after six years on the council, his political abilities have grown, lending him some independence.

Kang’s campaign finances indicate as much. During his re-election campaign last year, he didn’t donate any money to the slate-mailer committee that is largely credited with keeping the council majority in power. His campaign raised well over $100,000, with much of that cash coming from the broader Korean-American community.

Naturally, the council’s Republicans hope that the majority will come unglued.

“I would hope that all the council members have an open mind as to every issue instead of voting in lock without regards to the merits of our decisions,” said Councilman Jeffrey Lalloway.

Councilwoman Beth Krom, the third member of the council majority, doesn’t see the vote as a watershed moment.

“I don’t personally feel like I’m living in a shattered world,” Krom said. “I’m pretty grateful that we’ve had a majority on the council which is interested in accomplishing things, and I don’t see that as being different today.”

Krom voted with Agran against approval of the project, but she said she wasn’t looking to hold up the developer for more money. She wanted to table the decision until she sees a complete landowner agreement, she said.

“Once we come back for a second reading with all the information in front of us, I may be willing to change my vote,” Krom said.

Agran has lost allies in the past, Councilman Steven Choi. Mark Petracca, a UC Irvine political science professor who cowrote earlier versions of the slate-mailer that promoted the council majority, turned on Agran and claimed that Agran also cowrote the slate-mailer, a charge that Agran denied.

Choi said that Agran will make Kang pay for his vote. Once defied, Agran becomes vindictive, he said. “Larry will not forget it.”