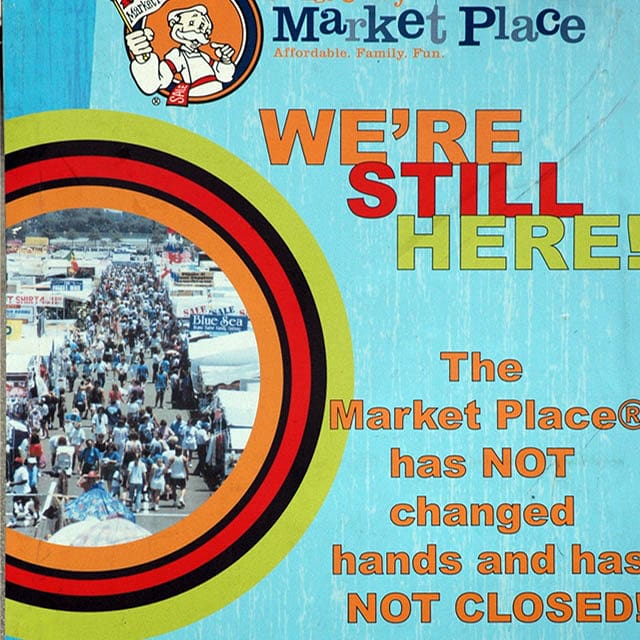 Friday, Sept. 23, 2011 | Orange County Marketplace swap meet owner Jeff Teller, a driving force behind the two-year fight to stop the sale of the local fairgrounds, has been kicked off the property.

The Orange County Fair Board in a 6-3 vote terminated their lease with Teller’s Tel Phil Enterprises, which has operated the swap meet at the fairgrounds in Costa Mesa for 42 years. It was the latest blow delivered in a feud that continues to escalate.

The increasingly hostile nature of the relationship between the board and its tenant was on full display Thursday. At one point, Teller called the Fair Board’s action a “terrorist threat.” Later in the meeting, board member Dale Dykema said the Tellers are “not easy to deal with.”

The reason given by board members for terminating the lease was Tel Phil’s business model, which members said is no longer viable. They pointed to slumping sales in recent years as proof.

Fair Board Chairman David Ellis and others complained that the rent paid by the Tellers (25 percent of gross sales) had been reduced in recent years, indicating potential problems.

Yet as they were attacking Tel Phil’s business model, board members were also authorizing requests for proposals for another swap meet operator at the site. A representative from Delaware North, which runs swap meets, attended the meeting.

Other fairgrounds activists said the real reason for the attempted ouster of Tel Phil is political retribution.

Teller became one of the key leaders of the Orange County Fairgrounds Preservation Society, which formed in 2009 after former Gov. Arnold Schwarzenegger put the fairgrounds up for sale and the Fair Board began a series of ill-fated, and in some ways illegal, attempts to sell the 150-acre property.

Teller was instrumental in gathering more than 50,000 signatures against the sale and was the lead plaintiff in a series of high profile lawsuits that eventually halted the sale of the property and kept it in public hands.

“It’s ludicrous that Fair Board members who schemed to buy the fairgrounds for themselves by forming a private foundation in 2009 have decided to retaliate against the OC Marketplace, one of the key entities that helped to stop the sale of the fairgrounds,” said activist Theresa Sears.

“It looks like retribution for exposing their dirty deeds.”

Teller’s attorney, Ruben Smith, pleaded with the board to avoid the grinding legal battle sure to follow the lease termination.

“Why would you punish a tenant that filed the lawsuit that successfully thwarted the sale of the fairgrounds?” Smith asked in open session. “If it wasn’t for the that lawsuit. none of us would be here. Put the politics aside and do the right thing.”

Fair Board attorneys, meanwhile, gave a detailed presentation showing that there have been numerous disputes with Tel Phil about coordinating swap meets with other events as well as issues like charges for sweeping.

“We’ve got a tenant out there that thinks they own this 150-acre property … and that is wrong,” said Ellis. “That relationship is beyond broken.”

Board Vice Chairwoman Joyce Tucker said the relationship was so strained that something like a marriage counselor was needed.

Just how bad the relationship has become was apparent during an exchange between Teller and Dykema. During the discussion between board members and Teller’s attorneys, board member Kristina Dodge asked that Teller himself speak.

After Teller called the Fair Board’s action a terrorist threat, Dykema crossed his hands behind his head and laughed. An emotional Teller asked Dykema what he was laughing about.

Dykema said he was reacting to the word “terrorist.” “You’ve just made your case on how you want to deal with the board,” he said.

Teller then let Dykema know he and the board are in for an intense battle.

“Make no mistake, we will do whatever we have to do to protect our business,” Teller said. “The swap meet does not belong to you. The parking lot does.”

Board members Nick Berardino and Gerardo Mouet, recently appointed by Gov. Jerry Brown, and Dodge, appointed by previous Gov. Arnold Schwarzenegger, opposed the action after Fair Board attorneys acknowledged, upon Dodge’s prodding, that Teller had not defaulted on his lease.

“How do we in good conscience take someone who we’ve worked with for 42 years, who is not in default of their lease, and say we’re going to kick you out. That’s unconscionable,” Berardino said.

Berardino also voiced concerns over the stability of more than 1,500 families who depend on the swap meet for their livelihood.

Ejecting Tel Phil would do nothing but add more stress to the tenants following two years of drama over sale of the fairgrounds, Berardino added. “What’s the real reason here? They’re not in default.”

Toward the end of the meeting at the urging of Dodge, Teller stood up and addressed the board saying, “I stand here today committed to work in earnest to arrive at something that is equitable to not only my business but to the district.”

But Teller also said it was hard to negotiate with a board that had made so many missteps over the sale process and had been so defiant of public calls for transparency.

“There’s a contingent on this board that believes might makes right,” Teller said.

In a separate but related matter, Berardino’s attempt to establish a citizens oversight committee that would have spent 180 days examining the entire sale drama and issue a report was voted down 7-2. Even a compromise motion offered by board member Doug La Belle didn’t have enough support to even garner a vote.

At the meeting, in an effort to forestall the formation of a committee, Ellis and CEO Steve Beazley provided their own historical account over the controversial hiring of former state Sen. Dick Ackerman.

“We did not handle it well,” said Ellis, referring to the quick formation of the nonprofit foundation to buy the fairgrounds. “The intention was always the preservation of the fair and the protection of the employees,” he said.

Ellis admitted that his presentation on what happened was “probably two years too late” adding, “thanks to Director Berardino for raising this.”

And yet while both Ellis and Beazley gave information that have never been publicly discussed, activists were not satisfied.

“I don’t think we’re going to allow for the sanitizing of the history,” said Sears at the meeting. “We have thorough documentation.”

In the end, Ellis noted publicly where the entire dispute is headed:

Correction: A previous version of this story misspelled Gerardo Mouet’s name. We regret the error.