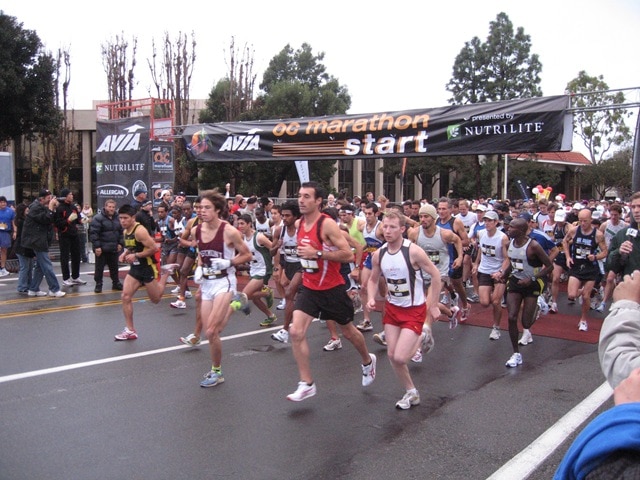 OC Marathon officials secured a long-term rental agreement with the OC Fair & Event Center Thursday, but not before a long and emotional debate among Fair Board members over whether the now for-profit marathon should disclose its financials and charitable donations.

Orange County GOP Chairman Scott Baugh spoke on behalf of the OC Marathon’s eight principal investors, telling the board that the event needed a long-term venue to “grow the marathon.”

Baugh said the OC Marathon, which started as a nonprofit in 2004, had consistently lost money because it too often had to adjust the routes and had to deal with so many cities on logistics.

Last year, Baugh and seven other supporters assumed the OC Marathon’s debts, bought the name and reorganized as a for-profit business.

Berardino has argued that because the OC Marathon has received free rent in past years — and because of its charitable connection to child obesity programs — the Fair Board has a responsibility to make sure such programs are still being funded after the marathon became a private business.

“If we helped them brand the OC Marathon, then I think the kids ought to get a big portion of what they make,” Berardino said. “The children are partners with you now.”

Berardino went so far as to suggest “if they give 95 percent of what they make each year to the children, we keep 5 percent, maybe we say we won’t charge you anything. That might be a better deal.”

Baugh fired back at Berardino, saying that the nonprofit foundation that runs the children’s programs is separate from the entity that runs the marathon.

“It’s the for-profit entity that is here before you,” Baugh told Berardino. “If you like the kids so much, we invite you to join the board.”

Baugh added: “Were not asking for favors. We’re offering a business transaction.”

He contended that the OC Marathon had an economic impact on the region and that the participating cities alone would receive $1 million in taxes. Baugh insisted that despite his power in the local GOP and his ties to many on the Fair Board, the deal was “not a political transaction.”

“I agree with you that this is a business transaction,” Berardino shouted back. “And this shouldn’t be a political transaction. And no one has mentioned that but you.”

Berardino tried to delay action on the marathon event through a motion saying that fair officials had simply accepted Baugh’s rent offer without negotiating on behalf of the children’s charities.

That prompted Fair Board member Dale Dykema to protest on behalf of the OC Marathon.

“Every time we have a contract before us, we should ask them what they are doing with their profits, who is involved,” Dykema said. “We have a commercially viable contract we are being asked to sign. It doesn’t have anything to do with what they donate to charity.”

Fair Board member Ali Jahangiri also criticized Berardino, saying he was concerned that “the more we poke holes in business plans,” the more instability would be created for the fairgrounds.

Berardino said Jahangiri and Dykema seem to have different standards depending on the business before the board. He mentioned the decision last month by the board majority to terminate the lease of TelPhil Enterprises, which operates the OC Marketplace swap meet.

“Your vote didn’t reflect that when it came to the Tellers,” Berardino said, referring to the family that owns TelPhil.

Berardino’s motion was ultimately rejected on a 5-3 vote, with Berardino, Mouet and Doug La Belle dissenting. The same votes were cast to approve the contract.

Fair Board member David Ellis abstained from voting, saying he had done some undisclosed work on behalf of an unnamed OC Marathon board member.

While Berardino lost the OC Marathon vote, he succeeded in obtaining a stay of execution for TelPhil. The board approved his motion to freeze efforts to terminate the OC Marketplace lease.

With only two members — Dykema and Ellis — dissenting, the board majority voted to halt plans to seek bids for a swap meet in exchange for a month-long negotiating window with TelPhil.

The vote came after numerous swap meet vendors came forward to bitterly complain about all the negative publicity generated over the last few years.

One after another, vendors told Fair Board members that their actions had forced swap meet business to spiral downward because customers think the swap meet is closing.

Dykema said the situation was unfortunate, blaming the problem on media coverage.

That prompted a strong rebuke from Theresa Sears, an activist with the Orange County Fairgrounds Preservation Society. “The fault lies with the Fair Board that tried to sell the fairgrounds,” Sears told Dykema from the public podium. “It’s not with the media.”

“You didn’t ever understand you are a public agency, not a private one, that serves the public,” Sears said.

After a series of emotional appeals and criticisms of staff suggestions for seeking swap meet bids, Fair Board members decided to halt the eviction proceedings and reconsider a lease with TelPhil.

“I would ask we reconsider the termination of the lease, get back, and let’s work it out,” Berardino said. “Let’s put the gun down. We can always pick it up.”