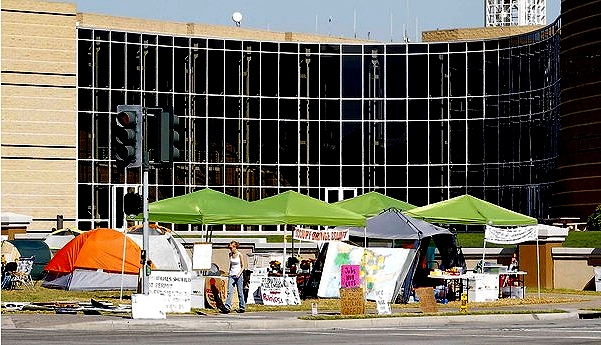 After more than two months of city-sanctioned camping at the Irvine Civic Center, Occupy Orange County protesters will dismantle their tents by Jan. 11, according to the terms of a new agreement extension signed by the city and the protesters Monday.

Under the agreed upon terms, the overnight encampment would end, but protesters vowed to continue their daytime protests at the corner of Alton Parkway and Harvard. The last agreement extension expires Wednesday.

The Irvine Occupy encampment is in solidarity with the Occupy movement, an international show of anger at what protestors say is increasing wealth disparity and corporate greed. The movement started as a protest camp in New York’s financial district and has led to protests in cities worldwide.

But the protest camps in New York and other major cities have been cleared, and the number of camps across the country is dwindling. While there hasn’t been an official survey, Occupy protesters in Irvine say they are among the last such tent villages remaining.

Some protesters are characterizing their departure as a victory, they said, because Councilman Larry Agran has informally agreed to propose city policy that would address their grievances. “If we can set the precedent, that to get rid of your occupation do something for them, that would move the movement forward,” said 26-year-old Andrew Weber, an Occupy protester and Irvine resident.

Among the Occupy proposals that protesters said could go before the City Council are the moving of city funds to local credit unions and community banks and out of the large multinational banks that the Occupy movement has targeted; and a city resolution challenging the United States Supreme Court ruling on the Citizens United case, a decision that prohibits the government from censuring political broadcasts by corporations and unions.

Yet whether council members will adopt such proposals remains unclear. Agran did not return calls seeking comment, and Mayor Sukhee Kang, who formed a council subcommittee with Agran to negotiate with the protesters, said he wasn’t made aware of such a deal.

“As far as our subcommittee discussion is concerned, there has been no discussion of any memorializing of any of the extra stuff they’re saying,” Kang said.

Greg Diamond, a Brea-based lawyer who has been assisting Irvine’s Occupy protesters in negotiations with the city, was cautious in his description of the informal agreement with Agran.

“We’re not going to say, ‘Oh yeah, we forced them to move funds to credit unions,’ but I think it’s fair to say that if that happens at the January meeting, it would not have happened without the Occupy movement,” Diamond said.

Protesters also said that they are considering moving to another city to expose their message to commuters who haven’t seen their encampment before. Weber said he wanted to see other city councils adopt policies aimed at blunting the power of large banks and corporations.

Both the protesters and Kang described the end of the overnight camping as a mutual decision and hailed what they said was the success of a peaceful protest.

“In my opinion it was a win-win. The city took the high road, respecting their [protesters’] free speech rights,” Kang said.