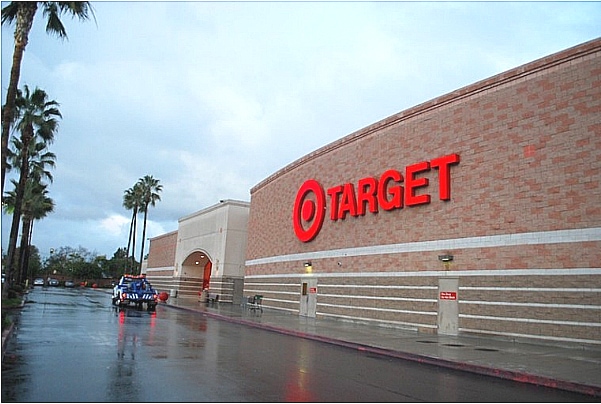 A Costa Mesa couple says a Target store beside their home has repeatedly violated its agreement with the city by operating heavy machinery at night and loudly sweeping its parking lot early on weekend mornings, among other issues.

The couple and an owner of two nearby homes also say the city has not taken strong enough steps to enforce the conditions of Target’s development review, which has been in effect since 2000.

“It affects our peace of mind here,” said Tom McCormick, who lives with his wife LouAnne in a home beside the store’s parking lot in the Halecrest neighborhood.

McCormick described the sound of sweeping as equivalent to 10 leaf blowers on a truck and added that it recently took place at 6:30 a.m. on a Sunday. “We want to sleep in on the weekends too,” he said.

The McCormicks said the Target store, near the corner of Harbor Boulevard and Baker Street, has been violating the agreement since it opened more than a decade ago. Their neighborhood includes eight single-family homes that share a backyard wall with the store’s parking lot.

The most recent dust-up between the residents and the Target store is over the retailer’s request for extended hours over the holidays. The company wants to change the agreement so it can stay open an extra hour until midnight between Thanksgiving and New Years Eve. The store also wants to open early the day after Thanksgiving, dubbed “Black Friday” because it is the biggest shopping day of the year.

At that meeting, Target representatives acknowledged that for the previous year and a half, the store had been staying open until 11 p.m., an hour later than the agreement allows except for the holidays, according to a city report.

A homeowner appealed the Planning Commission’s Black Friday decision, pointing to Target’s violation of the agreement’s provision on store hours. The City Council heard the appeal after Black Friday, so the store was not allowed to extend its hours this year.

But it did anyway, opening at midnight, seven hours before the agreement allows, and paying a $500 citation. The McCormicks said a car alarm went off around 2 a.m. in Target’s parking lot during the event.

“They boldly violated the rule and boldly ignored it,” said Al Morelli at a recent City Council meeting. Morelli owns two homes beside the store.

Costa Mesa Mayor Pro Tem Jim Righeimer said during the council meeting that Target contacted him about the Black Friday issue in advance. He explained Target’s concerns about not opening the store early after widely advertising the event but did not say that he told Target to follow the agreement.

Morelli questioned why Righeimer apparently didn’t tell Target to follow the agreement and wait until 7 a.m. to open on Black Friday.

“You gave an endorsement to break the law. And that’s not good for somebody who’s representing the public interest,” Morelli said in an interview, adding that Righeimer was “setting a precedent for everyone else to do whatever they want.”

Righeimer did not return a phone message seeking comment.

On the other issue — staying open later than the agreement allows for a year and a half — Target received sharp criticism from some council members.

“We are a rule-of-law city, and I think that in this case it is important to honor the original agreement,” said Councilwoman Wendy Leece at the recent council meeting. “Target was negligent in allowing that extra hour.”

“I’m shocked that Target took it upon themselves to add an hour to their hours of operation without any consideration of their terms of approval,” added Councilman Eric Bever.

Antoine LaFromboise, spokesman for Target, said the store is “working with the City Council to address any concerns related to the store hours.”

“We absolutely do want to be a good community neighbor,” he said. He couldn’t yet address the other issues raised by residents, he added.

Bill Lobdell, a spokesman for the city, wrote in an email that Target “has had few complaints” over the last decade and that the city has issued citations for any violations brought forward that could be proven.

A city memo dated Nov. 14 states that code enforcement has received 30 complaints regarding the Target store since it opened in 2000.

Lobdell said there were no complaints about Target this year until November and added that the city staff have always returned phone calls and honored meeting requests from the residents.

The McCormicks said Target representatives met with neighbors to negotiate terms of the agreement a decade ago. But when the company sought its latest changes to the agreement, it didn’t consult neighbors, they said.

The earlier opening time for Black Friday was also an issue with many Target employees across the country, who launched a nationwide campaign this year to prevent stores from opening at midnight.

Morelli said that when he learned of Target’s recent request for extended hours, he went to the store to see whether they were complying with the agreement. He saw that Target’s posted hours went until 11 p.m., took a photo, and reported it to the city.

Target was issued a $150 citation for staying open an hour later than the agreement allows.

The McCormicks also said that heavy construction took place in the middle of the night during a remodeling of the store and that they called the police several times but nothing was recorded. They added that many violations go unreported because they occur at night when the code enforcement staff is off duty.

Lobdell said the city has no evidence of the construction complaints. The McCormicks could have notified Mel Lee, a senior planner at the city, of any concerns, Lobdell said.

“If the City is made aware of a code violation or a complaint, each issue is fully investigated. There have been no exemptions given to Target or any business to violate the law,” wrote Lobdell.

He added that “the city has made significant efforts to enhance public input” on Target’s request for extended hours, including notifying property owners within 500 feet of the site about the request.

At the last City Council meeting, Righeimer suggested overturning the Planning Commission’s decision and granting Target its full request for extended hours during the holidays and Black Friday. The council deadlocked 2-2 over what to do.

Mayor Gary Monahan will review the video recording of the meeting, and the City Council will vote again at its Jan. 17 meeting.

While no more public comments are scheduled, LouAnne McCormick said she plans to gather signatures for adding a comment period to the Jan. 17 meeting.

“Does anybody care that there was an agreement and that neighbors are being negatively affected?” she asked.