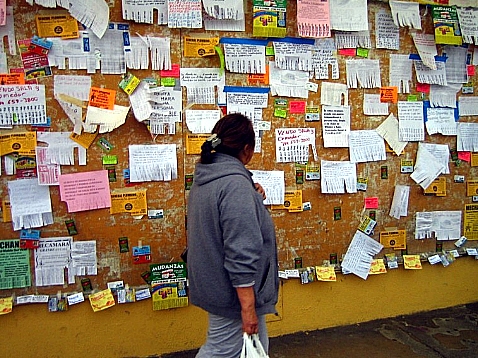 Her boys are older and in good health now, but when they were toddlers, Maria Lemus’ sons suffered recurring asthma attacks that required emergency room trips.

Lemus and her husband came to suspect that the attacks were caused at least partly by the smoking of two men who were subletting rooms from them. After finding evidence of cigarette and marijuana use, the couple kicked the men out.

“In my house, we have rules,” Lemus said.

These days the family’s home life is more tranquil, but they still must share their apartment with two couples, a situation that is all too common in Santa Ana and other low-income, congested pockets of Orange County. It’s either sublet rooms or the rent doesn’t get paid.

A visit to El Toro Carniceria, a large meat market and retail complex in central Santa Ana, reveals just how common the practice is.

The carniceria’s two massive bulletin boards serve as a nondigital Craigslist, with as many as 100 notices of rooms for rent. The ads, reflecting the desperation of those posting them, ask for “responsible people only” or subletters “without vices.”

When called about an ad, one woman said she charges $500 for a room and $750 for the room plus private bath, but she refused to disclose how many people reside in the home.

Another man said he’s trying to rent the second bedroom in his two-bedroom apartment. At present, a couple sleeps in one bedroom, and he sleeps on the living room couch.

While there is no data documenting the number of strangers sharing quarters in Santa Ana, recent census figures show that the average household size there is 4.38 people, compared to 1.87 in Seal Beach.

Research by the Kennedy Commission, a nonprofit housing organization serving Orange County, shows it is common in Santa Ana for five to seven people to share a one-bedroom apartment.

“People are living in garages and porches, with three families in a home,” said Foo. It’s not only immigrant families who are affected, she said. “No one can afford Orange County.”

But while living with strangers is financially expedient, it is also unhealthful. It leads to overcrowding, which can foster unhygienic conditions such as cockroach and rat infestation, along with asthma-inducing mold growth caused by leaks or numerous showers.

Even though its has always been common for large and extended immigrant families to share living quarters to cover expenses, renting to strangers is not a traditional practice, said Cesar Covarrubias, executive director of the Kennedy Commission.

“Now people are taking a risk with someone they don’t know,” he said.

The greatest threat resulting from living with strangers may be to the mental health of children, since it can expose them to predatory adults.

“There’s a lot of sexual abuse. It’s a perfect storm of parents who can’t be there to supervise kids because they’re at work, and so you rent out space to strangers and even family members,” said Pastor Jon Pederson of St. Peter Lutheran Church, which serves Santa Ana’s low-income Willard neighborhood.

For example, in one youth group at St. Peter’s, three of 18 teens have recounted past abuses in their own homes at the hands of strangers or extended family members who are renting rooms, according to youth group leader Alejandra Rodriguez.

And it is not just those renting out the rooms who are at risk. Apartment sharing among strangers can be harmful to the roomers, especially if the primary residents don’t give them full access to the house.

In one example, a prenatal assistance group, MOMS Orange County, discovered that a local pregnant woman with diabetes was failing to take her insulin because it required refrigeration, and she was not permitted to use the refrigerator in the apartment where she rented a room.

Similarly, lack of access to stoves and refrigerators in garage apartments makes it hard to serve balanced meals and can contribute to obesity, said pediatrician Patricia Riba, whose practice serves low-income patients in Orange County.

The psychological toll of living among strangers is exacted everyday in many ways, causing residents to feel trapped and unsafe in their own homes, said America Bracho, CEO of Latino Health Access, a Santa Ana-based community health organization.

“People are renting different rooms in a house, including sometimes the living room and the garage. People share the kitchen. … Sometimes they share the table and some don’t. The majority of people eat in the same room where they sleep,” Bracho said.

“Kids come home from school and have to remain in the room until the parents come. … They get strict orders: ‘Stay in the room,’ ” Bracho said. Children lack a place to study, and they witness drinking and fighting in some cases, Bracho said.

Afraid to Speak Out

Renters are generally supposed to contact landlords and follow up in writing if they have a complaint. But Bracho said families fear that if they report the problems either to their landlord or the city, they bring attention to their substandard living conditions and could have their children taken away.

“They need to go somewhere, so they rent a room. If the room is not appropriate, social services will take the kids while they get something better,” Bracho said. “So who is going to report that and say, ‘I’m living in a room with roaches’?”

More immediately, renters fear that complaints or withholding of rent will lead to eviction. Latino Health Access has enlisted the help of community-oriented property managers to improve the conditions in apartments, Bracho said, but her organization maintains a low profile in working with renters. “If we become very noisy, then we are kicked out.”

The rare positive result of group living has been when single mothers and their kids, who in some cases are fleeing domestic abuse, share an apartment, Bracho said. “Sometimes they buy a house together, living as an extended family.”

In recent years the situation has become more desperate. While income has dropped during the recession, Orange County’s vacancy rate has remained low, and rental prices have bounced back to their prerecession levels, according to Michael LaCour-Little, a finance professor at Cal State Fullerton.

The result is a landlord’s market. The average rent for a two-bedroom apartment in Santa Ana is $1,450. Pederson sees the affect of this on a regular basis when he talks to church members and visits their homes.

“We have three families right now in a three-bedroom apartment, and I can see why,” said Pederson. “Even garages are $500-$600 a month.”

In 1991, following the explosive population growth of the 1980s, the Santa Ana City Council passed an ordinance that would limit the number of residents in a home. Then the concern was less about public health and more about crime, trash and parking, according to news accounts.

But a lawsuit against the city overturned the Santa Ana ordinance in 1992, with a California Court of Appeal ruling that the state law on crowding prevails, according to Assistant City Attorney Ryan Hodge.

State law is based on an occupancy formula that allows two persons for the first 120 square feet of an apartment, with up to one person for every remaining 50 square feet, according to Martin S. Snitow, a San Jose housing attorney.

“You go measure a standard apartment, and it’s 1000 square feet. How many people can you fit if there are 120 square feet for the first two and 50 square feet for each additional person? That’s a lot of people. That’s a high maximum,” Snitow said. He said cities can sometimes use zoning to reduce crowding, and landlords can place restrictions in the lease.

Santa Ana’s attempt to reduce crowding fell victim to a suit filed by Ascension Briseno, now 70 and retired. He felt that in filing the lawsuit, he was defending his family and the poor people in his community. But despite winning the case, Briseno is not happy about the city’s crowded conditions and strangers sharing apartments.

“Now more people are living with strangers,” he said. “They don’t do it because they want to.”

Amy DePaul is a freelance writer and lecturer in the UC Irvine Literary Journalism program. You can reach her directly at [email protected]