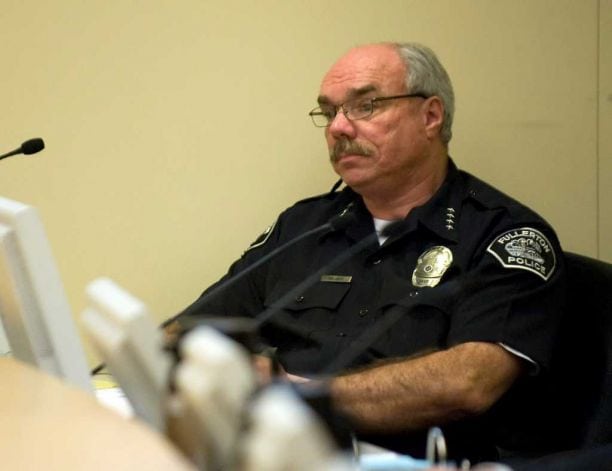 Michael F. Sellers, the Fullerton police chief who was harshly criticized after the police beating death of mentally ill transient Kelly Thomas and then went on extended medical leave, will officially retire this month.

“We will be reviewing our options with the Council in the coming months and will determine the best course for the city in finding a replacement,” Felz stated in the news release.

Sellers “will be eligible for an industrial disability retirement based on findings from both his doctor and the city’s doctor, who determined Sellers is disabled and can no longer perform his job as Fullerton’s police chief,” according to Felz’s announcement.

It added that the retirement announcement “coincides with resolution of Sellers’ workers’ compensation claim.” Under that agreement, Sellers will receive $127,000 plus $22,500 in legal fees, said Felz. He said the agreement with Sellers “relieves the city from any future responsibility for medical costs related to the claim.”

William McCormick, the attorney who represented Fullerton in the workers’ compensation claim, said, “Chief Sellers’ treating doctor and an independent doctor both said he was unable to return to work at his job, and the settlement ended any potential liability for future medical treatment costs, which could be significant.”

Dan Hughes, a captain who has been with the department for 28 years, will remain acting chief until a permanent chief is in place, according to Felz.

In public hearings before the Fullerton City Council and in demonstrations outside the police station, Sellers was criticized for not immediately pulling the patrol officers off the streets and putting all six on administrative leave.

Sellers was named chief of the Fullerton department in May 2009, moving from Laguna Beach, where he served for four years. During his tenure there the Laguna Beach City Council also was embroiled in a homelessness issue and ultimately settled a case over how its police department treated those who lived on the streets.