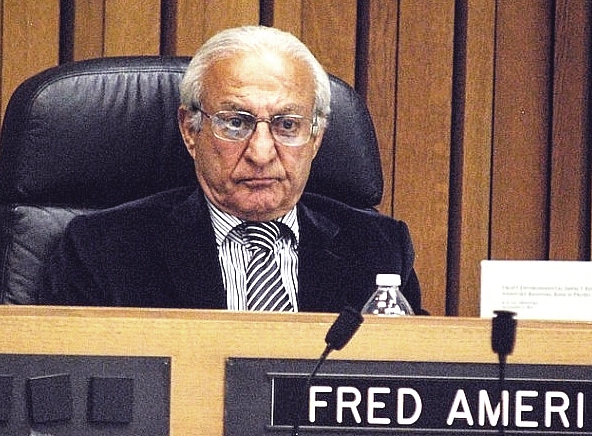 Ameri has also been — until his somewhat abrupt retirement Thursday — a senior vice president at Irvine-based RBF Consulting, a large civil engineering consulting firm that has made hundreds of thousands of dollars on studies for the proposed plant.

Questions have been raised over Ameri’s vote, given the firm’s extensive work on desalination projects, including the Huntington Beach facility’s environmental impact reports.

RBF was paid $471,000 for its work on the Huntington Beach plant reports and also has a $134,000 contract for plan check work on Poseidon’s proposed Carlsbad facility. And according to a company manager’s official biography, the firm has managed the permitting or environmental complianceor both on more than 10 desalination projects.

While a good-government expert said Ameri’s vote last month appears to be legal, several environmental activists say that given his employment at RBF and the firm’s income on Poseidon projects, he had an ethical responsibility to recuse himself from any involvement in the permit decision.

“RBF is entwined in the desalination industry, and they have millions of dollars at stake regarding consulting work that they do for the industry,” said Debbie Cook, an environmentalist and former Huntington Beach mayor.

“So of course the vote was important for them. Any votes that move them closer toward working on another project or growing that industry [are] going to be in their financial interest.”

There are also questions regarding whether Ameri, who also serves on the Newport Beach Planning Commission, properly filed all of the required disclosure forms for board members.

Tracy Westen, CEO of the Center for Governmental Studies, said he sees no unlawful conflict of interest in this case but that RBF’s involvement with Poseidon nonetheless creates “an appearance of a conflict.”

“I would have thought that disclosure would have been appropriate or possibly recusing himself,” Westen said. “It does seem like the RBF company is entangled or deeply involved in desalination projects.”

Multiple Answers to the Same Question

In interviews Wednesday, Ameri gave conflicting accounts of his knowledge of RBF’s involvement in the Huntington Beach project before the vote.

“I knew something about it, that we are doing some work for them, but I never, never was involved or was curious about what we were doing and to what extent,” he said at first.

But seconds later, Ameri insisted he had no knowledge of RBF’s connection before the vote.

Asked later about the contradiction, Ameri said that “maybe I had heard through some casual conversation with one of the employees that we are working on a bunch of [desalination] plants, and maybe he had mentioned Huntington Beach.”

Ultimately, Ameri said, if he had known about the RBF’s involvement with the project, out of an abundance of caution he would have recused himself from voting. However, he said, it’s up to the water board’s staff to notify him if he has conflicts.

“I don’t see it as my personal responsibility to make sure I don’t have conflicts of interest,” he said.

The California Fair Political Practices Commission, the statewide authority on conflict of interest issues, sees it differently. The FPPC has ruled that “the ultimate responsibility for the reasonable assessment and disclosure of all pertinent facts” related to conflicts “rests with the public official.”

Ameri said he was planning to retire from RBF in late April after 55 years with the company. But hours after Wednesday’s interview, he said he moved up his retirement to Thursday, citing the “many other things that I love to do.”

“Absolutely it was appropriate. He has every legal right to vote on the project,” said project spokesman Brian Lochrie. “The opponents of this project don’t have science on their side, they don’t have the law on their side,” and have been trying “dirty tricks and innuendo” in an attempt to kill the project, he said.

Ameri’s vote was crucial to the plant getting the permit because fellow board member Linda Ackerman recused herself from the decision, due to her position at two public agencies that support the project. Her husband also works for a law firm that has advised Poseidon on “permitting strategies” and represented the company in its dealings with the Huntington Beach, though both firms say their relationship ended in December 2009.

With Ackerman’s abstention in February, Ameri’s vote was needed to approve the permit. If he had abstained, the board would have lacked a quorum and couldn’t have voted. It would likely have had to either pass the decision to the state water board or wait for a vacant position to be filled.

The discharge permit allows Poseidon to directly use an adjacent power plant’s high-volume seawater intake. A recent statewide policy requires the power plant to drastically reduce its use of the intake, an effort to minimize harmful effects on marine life.

Officials say the permit meets all relevant laws, but environmentalists contend that the permit’s approval undermines the state policy by allowing the intake to continue to kill a significant amount of small organisms, which form the base of the ocean food chain.

Advocates for the Huntington Beach plant, however, point to the environmental report’s determination that the project would have an insignificant impact on marine life and “the project is not within an area of special biological significance.”

Among the industry’s advocates is CalDesal, a consortium of public water agencies and private firms that describes itself as “the only advocacy group in California solely dedicated to advancing the use of desalination.”

Lochrie said Poseidon has never had a contract directly with RBF has no plans for agreements with the firm.

“We are not considering anybody for any future work, because we’re not through the permitting process yet,” he said.

Yet Cook and other environmentalists contend that while Lochrie’s statement regarding direct contracts is technically correct, the firm has had clear financial ties in recent years to both of Poseidon’s desalination projects.

The firm received $205,000 for the Huntington Beach project’s original 2001 environmental study and $137,000 for another environmental report on the project in 2004, the city says.

Additionally, RBF consulted on the Huntington Beach project’s 2010 environmental impact report and was paid $129,000, according to the city. That document serves as the project’s official environmental report.

RBF also has an ongoing, $134,600 contract for future plan check work on Poseidon’s nearly-identical project in Carlsbad, which is further along in the permitting process, according to that city. Poseidon is ultimately paying for that work as well.

Ameri’s recent vote isn’t the first time questions have been raised over RBF and conflicts of interest. In the late 1980s and early 1990s, the firm gave more than $14,000 in gifts — “including pheasant hunting and fishing trips, golf games and meals” — to the two top managers at Santa Margarita Water District in South Orange County, according to the Los Angeles Times.

RBF, which was known as Robert Bein, William Frost & Associates at the time, received more than $13 million in contracts from the water district over the same period.

Ameri has served on the regional board since early 2007, but in response to a public records request to the agency by Voice of OC, his 2007, 2008 and 2010 mandatory financial disclosures were reported missing. A state water board official said the agency provided all of its records for those years, and officials confirmed that regional board members, including Ameri, are required to file the forms.

Ameri insists he did file them.

“I am absolutely certain that I’ve filed for every single year that I’ve been on that board, even though those may be missing at the board.”

In 2010 he filed a disclosure with Newport Beach for his Planning Commission position and listed his role on the regional water board, which the form seems to indicate covers both positions.

However, Ameri says that in 2007 and 2008 he wasn’t serving on any public boards other than the water board, so there are no other positions for which he could have filed it. When confronted with that fact, Ameri said he must have filed them with the water board.

Potential violations of the state’s financial disclosure requirements are investigated by the FPPC — which Ameri referred to as “the fair political whatever thing” — and can lead to fines of up to $5,000 per instance.