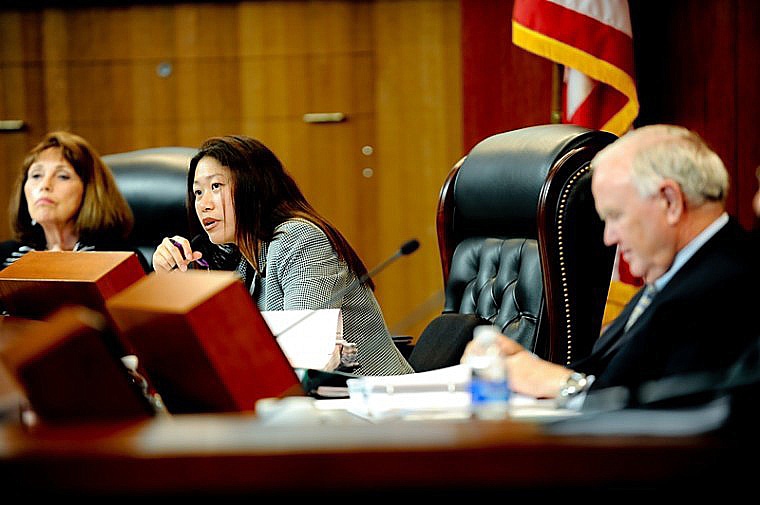 Orange County supervisors Tuesday indicated they would renew their annual $264,000 lobbying contract with Sacramento-based Platinum Advisors, despite that doing so violates a county policy that contracts be re-bid after five years.

“I’m comfortable waiving the policy and staying with the current firm,” said Chairman John Moorlach. “Platinum Advisors has been outstanding.”

Waiving the policy made Supervisor Shawn Nelson uncomfortable, and he called it “bad form,” although he said he didn’t have any issues with Platinum.

That drew a response from Supervisor Bill Campbell, who said, “Policies are made for us, and we have the authority to waive them.”

Supervisor Pat Bates also supported a waiver, saying, “This will be a very volatile legislative session.”

Nonetheless, Bates said she wants to see a competition for the lobbying business in 18 months, adding, “Sometimes, competition sharpens the tools in your shed.”

Platinum Advisors got the county contract in 2008 when Republican Party Chairman Scott Baugh was with the Sacramento-based firm. He dropped the county as a client after then-Supervisor Chris Norby complained that the county didn’t get adequate progress reports on what Platinum was doing. While Baugh says he is no longer with the firm, the firm has kept the county contract.

Platinum’s effectiveness got an ugly questioning last year when county officials discovered that $48 million from vehicle license fees had been taken away from Orange County. The county’s entire lobbying team had missed a glitch in a county refinancing effort in 2006 that allowed Sacramento to keep the revenue.

County supervisors had been informed that year that the vehicle license fees were vulnerable and could be lost forever. Campbell was on record as saying the glitch would likely be fixed during the end of a legislative session.

But it never was.

Platinum Advisors also made news during the proposed sale of Orange County’s fairground when it was revealed that the firm was secretly hired by the Orange County Fair & Event Center board in 2009.

Darius Anderson, who heads Platinum Advisors, came before county supervisors Tuesday and touted his firm as a bipartisan player in Sacramento that has every member of the state Legislature covered by a staffer.

In addition to having a large staff, Anderson said the firm had good access and strong strategic skills.

Anderson, who is known for his longtime sponsorship of trips to Cuba for legislators, told supervisors of his extensive Democratic contacts, noting he was Jerry Brown’s lobbyist when Brown was mayor of Oakland.

He also talked about having a great relationship with state Senate President Pro Tem Darrell Steinberg and Speaker of the Assembly John Perez.

Anderson told supervisors it would be best to bid out the contract for lobbying services toward the end of a legislative session, most likely in the fall. That would allow a new lobbyist, should they win the bid for the contract, to become accustomed to the county’s issues and players.

Supervisors voted unanimously to direct staff to bring back a contract for Platinum Advisors and largely adopted Anderson’s suggestions for how to structure the process for requests for proposals.

Anderson told supervisors his firm would compete effectively because it has developed a specialty with Orange County issues. “We’ve spent a lot of time to build the relationships to understand your issues,” Anderson said.

Anderson acknowledged the firm’s biggest blunder, the loss of the vehicle license fees. But he also credited his firm for scrambling to push a fix through the Legislature before the end of the legislative session. The effort fell short, but, Anderson said, “We made amazing headway in getting it through one body in the Legislature.”

No supervisor publicly mentioned the situation.

Campbell acknowledged after Tuesday’s session that Platinum had dropped the ball in the intervening years regarding the county vehicle license fee situation and said he expressed those sentiments privately to Anderson.

But both Campbell and Nick Berardino, general manager of the Orange County Employees Association who was involved in the lobbying effort, credited the firm for going all out on the last-minute legislative blitz.