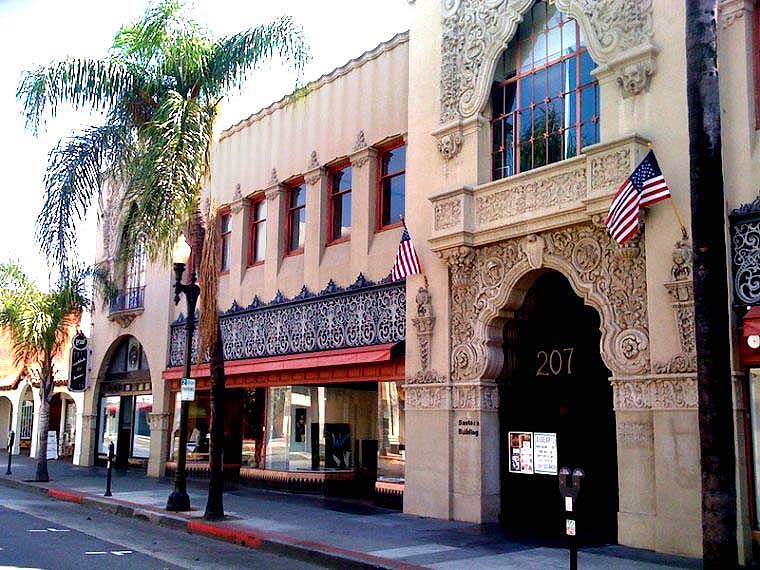 With the news rapidly spreading that Irvine-based Newsong Church is close to buying the Santora Arts Building in downtown Santa Ana, business owners and others in the area have reacted with a mix of fear and optimism.

Some say the possible sale could kill the downtown atmosphere still in its infancy. On the other hand, a Latino merchant says it could be a welcome reversal of a growing “red light district” that is defined by alcohol consumption and late-night partying.

Downtown artists, who arguably have the most at stake, have planned a meeting Thursday to address the issue.

Most who are willing to speak about the sale acknowledge that it’s too early to project what its impact would be.

“We’d like to bring them [church officials] to the table and see what their intentions are,” said Vicky Baxter, executive director of Downtown Inc., which promotes the downtown core.

The Santora is the centerpiece of Artists Village, an eclectic mix of restaurants and galleries that has been growing in popularity over the past decade. The 1920s-era building, known for its ornate Spanish mission architecture, houses two restaurants, a bar, some art studios and other businesses.

City leaders in the 1990s envisioned a downtown revitalization with a thriving arts scene as its catalyst. The city invested millions in the redevelopment of the Cal State Fullerton Grand Central Art Center. The city also gave a forgivable loan of $500,000 to current Santora owner Mike Harrah to remodel the space that houses Memphis at the Santora restaurant.

The Santora, Baxter said, is “too important a building, and everything is built around that landmark.”

The sale is in escrow, church officials confirmed Tuesday. What remains unclear is exactly how church leaders plan to use the building if they indeed buy it. Newsong Lead Pastor Dave Gibbons posted a document on Facebook describing plans to use the building as a ministry.

“This building represents our first leadership training/resource center,” the document reads. “The Santora Building has the potential of meeting all of our program needs except for weekend services for the Irvine family — offices, rehearsal space, training space, small groups and other ministry gatherings.”

But in Tuesday’s news release, church leaders backed off from that statement, saying that they have no solid plans yet for the building.

Jim Kendrick, owner of Rags International News Stand near the Santora, described a church acquisition in stark terms. He is particularly concerned with publicized plans to consider developing a meeting hall within the building that could seat more than 300 people.

“It’s like driving a wedge in something that’s taken 20 years to build,” Kendrick said.

Tim Rush, who sits on the advisory board of the Santa Ana Historical Preservation Society, reacted to the potential sale with indignation.

“It’s absolutely wrong,” Rush said earlier this week. “I’m as mad as I’ve ever been.”

Not everyone feels anger. Sam Romero, owner of St. Teresa’s Catholic Gift Shop and a local activist, has been opposed to the growing nightlife district. Romero and other Latino merchants see Artists Village as the center of a city-backed gentrification scheme to push Latinos out of downtown.

A church purchasing the building “will slow down the progress of the red light district in Santa Ana” and “bring more family values to reverse what’s happening. … It’s like a blessing in disguise,” Romero said.

Restaurateurs in the area, meanwhile, remain cautiously optimistic. One restaurant owner said the church’s ownership of the building wouldn’t injure the momentum of downtown because the Santa Ana Artwalk, a monthly event that draws large crowds, has expanded beyond the Santora. Another restaurant owner said he has yet to come to any conclusions on the situation.

Joey Mendes, owner of Proof Bar, which is housed in the Santora, is possibly the building’s largest tenant, because he also leases an adjacent, empty space. Mendes has been attempting unsuccessfully to expand his bar, but the city has rejected his application.

And though Mendes said he is locked in under a multiyear lease, he recognizes that the possible sale raises questions about the future of his bar. “I have short-scale and long-scale plans about my business, and it changes the access by which I view these long-term decisions,” he said.

Some city leaders also dismiss notions that the sale could significantly alter the character of downtown, while others have yet to form an opinion.

Councilman David Benavides, whose family has attended the church for 10 years, had said the church values the arts and would likely preserve them at the Santora.

“I know that they are very much interested in preserving the arts component, and that’s part of what actually drew them,” Benavides had said. “They’re a genuine, down-to-earth group of folks. Wherever they go, they’ve very much committed to supporting that community.”

Councilman Sal Tinajero also dismissed concerns. “I don’t think the church would reduce the flame down there,” he said.

Tom Greer, who had identified himself as an accountant associated with the church, described the meeting facility as a potential “community theater,” adding that the Santora is too small to meet the church’s needs for weekend services.

“We have no immediate plans to consider such an option, even if it is possible. Our focus is on creating a great space for artists and adding to the community by preserving the historical integrity of Santora,” Greer wrote in an email to Voice of OC.

Beyond concerns regarding what might happen to the building, the downtown’s denizens are curious about what kind of church is moving in.

According to a profile of Gibbons and the church published by OC Weekly, the church is targeting “misfits” that are supposed to change the world. Gibbons created a nonprofit consulting group called Xealots, which is “to identify and equip the next generation of socially conscious leaders,” the profile reported.

The church also aids the poor,  providing burritos and laundry service to homeless people, according to OC Weekly.

According to the church’s website, Gibbons conceived of the church when he heard God say “Psalm 40” twice while he was in a hotel room. “Upon reading those words, he looked out the window saw Irvine and the Orange County region stretched before him, and knew that God had a plan for him to move his family to Orange County from back east to start a church where many will see the LORD,” the church’s website states.