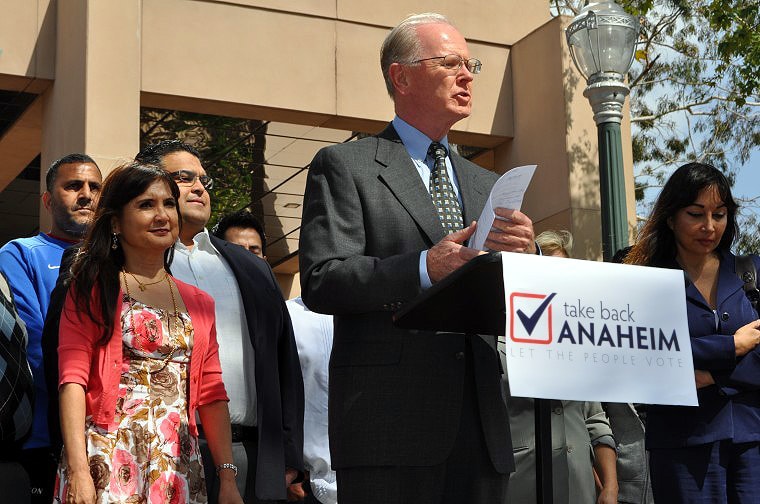 A coalition of residents called “Take Back Anaheim” unveiled a petition drive Thursday to place an initiative on the November ballot that would require a citywide vote to approve subsidies for hotel developers.

The initiative, dubbed “Let The People Vote,” is a response to a $158-million tax subsidy granted by the Anaheim City Council on Jan. 24, allowing the developer of two planned four-star hotels at the Anaheim GardenWalk center to retain 80 percent of the hotels’ room-tax revenue for 15 years.

“If the city is going to give away tax money to corporate developers, all we want is the right to vote on it,” resident and coalition member Larry Larsen said in a news conference outside City Hall.

The subsidy led to a split  in the community and on the City Council.

Public sector unions and community activists have blasted the subsidy as a giveaway of public funds without any community benefits.

A coalition of building trade union leaders and some in the business community have banded together, arguing that the subsidy will create jobs and spur economic growth.

While the initiative wouldn’t overturn the GardenWalk hotel subsidy, it would require the developer to put to a vote of the residents any time extensions on the subsidy agreement, according to an email from Councilwoman Lorri Galloway.

Galloway, who along with Mayor Tom Tait voted against the subsidy, came under fire  at this week’s council meeting because she signed, usinf her title of mayor pro tem, a notice of intent to circulate a petition for the initiative.

Councilwoman Kris Murray is pushing to strip Galloway of that title and scheduled appointing a new mayor pro tem for an upcoming council meeting.

Coalition members acknowledged that they do not yet have a plan to gather the required signatures but said their coalition is swelling with new volunteers.

“It’s going to take a lot of work,” Larsen said.