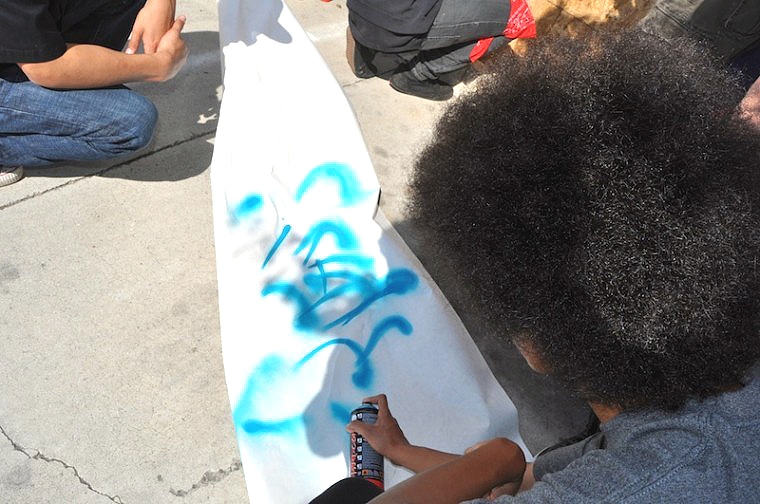 It’s Saturday afternoon and artist Benjamin Vazquez from El Centro Cultural de Mexico is roaming downtown Santa Ana in search of idle youth. He scours the cracked streets and the hangout spots, including a street-wear shop hip with local taggers.

In this urban, mostly Latino city, where 30 percent of the population is less than 18, the kids aren’t hard to find. Four teenagers are gathered at a small park. Vazquez persuades them to attend an aerosol art workshop across the street outside the headquarters of El Centro, a nonprofit organization that offers youths opportunities to connect with Latino music, dance, art and culture.

Only one of the teenagers, a 15-year-old boy who would go only by the name Froe, a street-art name he adopted to go with his giant hairdo, stays for the workshop.

“I knew I would be painting today,” Froe said. “Just not here.”

The aerosol workshop, sponsored by Arts Orange County, a nonprofit dedicated to cultivating the arts, is one of several associated events surrounding Día del Niño on April 29, a holiday to honor children celebrated in many countries. The James Irvine Foundation awarded Arts Orange County a grant to help celebrate the event.

“I think it’s important to set the tone in our community that we support the artists,” said Arts Orange County Project Coordinator Sara Guerrero. “It’s almost like a legacy — perpetuating an artistic legacy.”

The arts tap into “innovation, confident choices, ability to work with others,” Guerrero said. “I think these tools are invaluable for a healthy community.”

In some of the city’s more hardscrabble areas, a workshop like this — which was done in partnership with El Centro — could steer young street artists away from violating the law and place them on a path toward a professional artistic career, said workshop operator Mario Cuen.

The 33-year-old Cuen, who grew up in the Wilmington area of Los Angeles, started as a graffiti artist, but turned away from illegal street art after finding a studio and gallery called Slanguage, an outlet that featured street art.

Coming to Slanguage was the beginning of a transformation, Cuen said. With access to a world beyond graffiti, Cuen broadened his approach. “There’s a lot more than this spray can,” Cuen said.

Whether the aerosol event will be a first step in a different direction for Froe remains to be seen. Right now he’s focused on perfecting the lettering in his craft. And he readily acknowledges that he still plans to graffiti a billboard up the street later that night.

Cuen says that in his case at least, doing illegal street art gave him a rush that he still misses. But Cuen still insists that giving youth artistic outlets can change lives: “If I would have had this in the beginning, I would be doing animation for Pixar. who knows?”