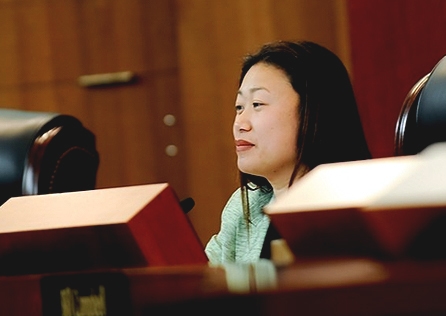 The Orange County Board of Supervisors Tuesday filled four open seats on the CalOptima board of directors, including two campaign contributors to Supervisor Janet Nguyen, the driving force behind remake the board.

The 11-member board directs the county’s $1.4-billion health care program for poor and elderly people.

Yet Nguyen suffered a rare defeat when the board turned down another of her desired appointees.

Anh, who has donated $1,350 to Nguyen’s campaign, was approved unanimously for the seat reserved for a group that represents county residents who participate in the federal and state-financed program. Dang, who gave the supervisor’s campaign $500 last fall, was approved on a 3-2 vote with supervisors John Moorlach and Shawn Nelson, voting no. He will fill the seat designated for a doctor in current practice.

The five Republican supervisors also voted unanimously to appoint GOP activist Steve Knoblock to represent the general public on the board. Knoblock, a real estate lawyer, is a former member of the San Clemente City Council and a former alternate to the local county Republican Central Committee, who began his career as an aide to former Supervisor Larry Schmidt.

But when it came to the selection of a fourth board member, Nguyen could not persuade Supervisors Bill Campbell and Pat Bates, her allies on CalOptima issues, to vote her way.

On a 4-1 vote, with Nguyen dissenting, the board appointed Dr. Samara Palacio Cardenas, a pediatrician and chairwoman for pediatrics at Anaheim Memorial Hospital, for the seat designated for a health network or an independent physician’s association that contracts with CalOptima.

Nguyen had wanted Dr. Keith Wilson, regional medical director for HealthCare Partners, who had obtained a letter of support from another of Nguyen’s campaign donors.

There was no discussion about the qualifications of any of the nominees. The appointee will not receive any pay nor have any staff while serving on the board.

Nguyen also serves on the CalOptima board as part of her supervisor responsibilities. With the backing of Campbell and Bates, she has been able to make substantial changes that have increased medical industry influence on the board.

CalOptima board applicants were “instructed to send all application materials to the Health Care Agency,” stated agency spokeswoman Deanne Thompson in an email.

But Monarch appeared to bypass the rules, sending its letter of recommendation directly to Diane Nguyen.

Their letters don’t indicate copies were sent to any of the selection committee member but Diane Nguyen.

The new board members’ first meeting will be Thursday, when the CalOptima board begins discussing the 2012-2013 budget.

Correction: A previous version of this article misidentified Steve Knoblock as a current member of the San Clemente City Council. Knoblock is a former member of the council.