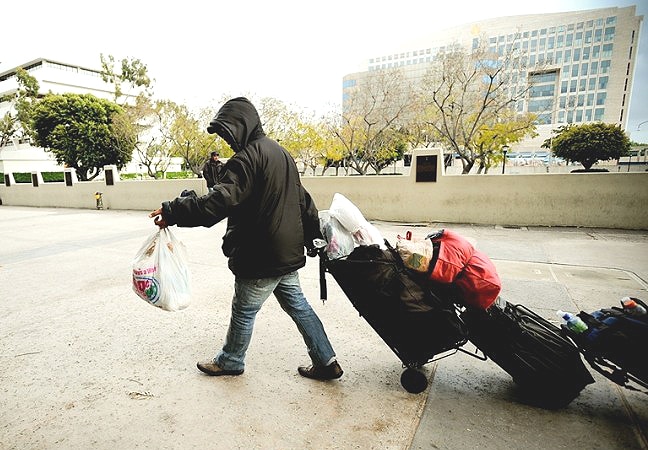 A homeless person walks near the Walk of Honor at the Santa Ana Civic Center.  (Photo by: Violeta Vaqueiro)

A task force appointed by the Fullerton City Council after the police beating death of mentally ill transient Kelly Thomas is recommending the city increase services and push the county to adopt stronger laws to help homeless adults who are mentally ill.

The recommendations are contained in the final report of the Task Force on Homelessness and Mental Health Services, which is scheduled for discussion by the City Council on June 5, election day.

That day voters will also decide whether to recall three of the five City Council members — Pat McKinley, Don Bankhead and Richard Jones — whom opponents accuse of being slow to act in the wake of the July 5 beating of Thomas by six Fullerton police officers.

Two of the officers have been ordered to stand trial on murder and manslaughter charges.

The 17-member task force was formed to determine what services exist in Fullerton for adults who are mentally ill and homeless, to look for the best ways to provide more services and to recommend what the city could do better.

Underlying the eight specific recommendations, according to the task force, is a basic need to change public perceptions of adults who suffer from mental illness and live on the streets.

Everyone, including police, community leaders, religious and nonprofit leaders, schools and the general public, “need to better educate ourselves about this problem,” said Rusty Kennedy, leader of the task force and head of the Orange County Human Relations Commission.

“A lot of people were doubtful we could pull this together,” said Kennedy, who grew up in Fullerton and still lives there. But, he said, task force members worked together because “we’re trying to make the future better.”

One of the most controversial recommendations is that the city urge the Orange County Board of Supervisors to adopt Laura’s Law. The purpose of the law, enacted in 2003, is to provide outpatient medical treatment — mandatory treatment, if necessary — for the most severely mentally ill adults in the state. In the most severe cases, untreated patients are homeless and potentially violent.

The Legislature left to each county the decision to implement the law.

Initially the main obstacle was the cost of providing the court-ordered treatment. That obstacle was removed in 2004 when voters approved Proposition 63, which raised money for mental health treatments by imposing a tax on individuals whose annual income exceeds $1 million.

There is also significant opposition on philosophical and political grounds. For three years, opponents battled the plan for involuntary treatment as the bill moved through the Legislature, arguing it was a serious violation of personal rights.

County mental health officials have said they are unable implement the law because an opinion from the county counsel states that they can’t use the special state mental health funds for Laura’s Law.

Kennedy said one point that medical professionals and family members emphasized to the task force was the “absolute incapacity” of many adults who are severely mentally ill to understand that they need to take medication.

“Within our grasp,” he said, “there are the resources and the tools to help a lot of these individuals live normal lives.”

In addition to supporting Laura’s Law, recommendations to the city include:

The report also said the task force should be put in charge of implementing the programs it recommended.

In addition, the task force recommended that the city find a way to create an ID system for homeless individuals who don’t have a driver’s license or other identification.

Along with that, it suggested a more general program where “mentors” would help homeless adults obtain birth certificates, California IDs and Social Security cards.

For about three decades, Fullerton religious organizations have run meal, clothing and food bank programs. The task force recommended finding ways to add showers, laundry and other services to the  programs.