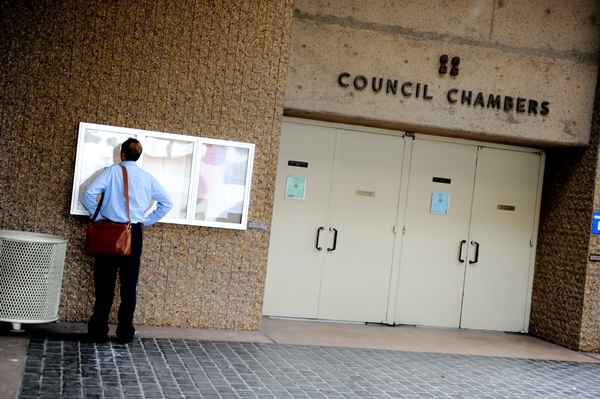 The Santa Ana City Council’s ethics committee voted Thursday to send to the full council a proposal to increase transparency throughout city government.

The proposal, which has yet to be drafted into a prospective ordinance, would among other things mandates require the city to publish council members’ meeting calendars, create a lobbyist registry and require meetings with the community before certain development projects.

The idea of such a sunshine ordinance comes from a coalition of neighborhood representatives and community activists known as the Santa Ana Collaborative for Responsible Development (SACReD). They have been pushing for the law by meeting individually with council members.

While the coalition has made strides with council members, there are still several hurdles to overcome before the proposal can become law, said Assistant City Attorney Jose Sandoval. At Thursday’s meeting, Sandoval highlighted parts of the proposal that are out of step with other laws, making them difficult to implement.

And regarding open calendars, Sandoval said the city would have to waive a deliberative process privilege that allows public officials to meet secretly with others about city business. Terry Francke, general counsel for Californians Aware and an expert on the California Public Records Act, has disputed the claim that calendars can be shielded from the public.

Despite staff reservations about parts of the proposal, members of SACReD said after the meeting they were optimistic about the proposal’s prospects.

“I feel encouraged that this is going through the process and is advancing,” said Ana Urzua, lead community organizer with Orange County Communities Organized for Responsible Development, which is part of the SACReD coalition.

So far, the only policy that has been cut from the proposal is an oversight commission that would monitor how well developers deliver on promised benefits to the community.

Committee Chairman Sal Tinajero, who has been the council member to most strongly back the ordinance, said he was happy to see that the coalition represented a broader representation of the community. The common ground among the city’s diverse people, he said, is that “we need to create this level of transparency.”

“Tonight was a huge blessing for me to see immigrant individuals,” Tinajero said. “Because it sends a message that you care about your community too.”

Councilman Vincent Sarmiento, who also sits on the committee, had reservations, saying he wanted to see a cost breakdown for the proposal and make sure that parts of the proposal don’t duplicate what’s already required.

Finances are tight for the city, which just pulled itself out of a $30-million budget hole. “It’s like a piece of pie. You take one slice, it takes away from something else,” Sarmiento said.

But Sarmiento also said transparency could ease suspicions among residents. “To me, transparency and openness is a good thing, because maybe then people will think there isn’t something sinister going on,” he said.