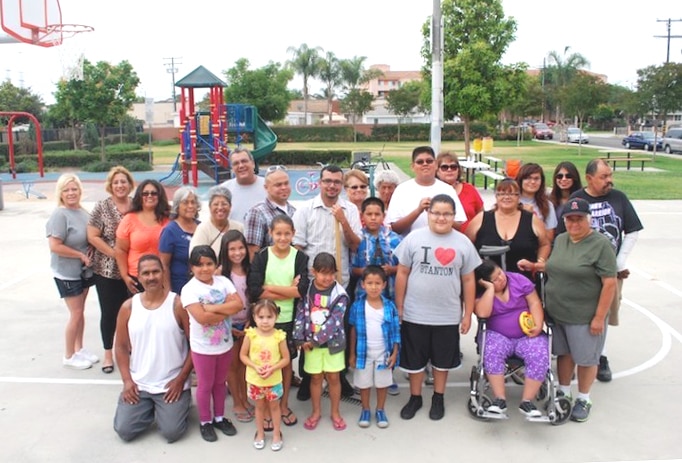 Stanton is the most “park poor” city in Orange County, and budget cuts this year made the situation far worse.

But a decades-old neighborhood, where some families have lived for five generations, is fighting back, determined to keep open the half-acre Victor Zuniga Park where the grandparents of some of today’s children played and neighbors and relatives still gather for birthday and fourth of July celebrations.

“Everybody’s trying to keep the park,” said Diane Duque, who lives across the street from the park in the house where she grew up. She has four grown children, including one son who is a Marine and served four tours in Iraq.

“Now my grandkids are using the park,” she said.

Stanton is one of the California cities hardest hit by the nation’s economic struggles and major cuts in city finances, according to Monday’s Los Angeles Times. The overall situation in Stanton is so bad,  the city may have to disincorporate, the Times reported.

On Election Day this month, voters rejected a city utility tax, and the state has taken away redevelopment funds the city counted on to revitalize blighted areas.

The Orange County Archives show that about a hundred years ago a small cluster of homes called the Benedict community formed in the sparsely populated unincorporated fields west of Anaheim.

The archives don’t explain the name, but even today, longtime residents refer to the neighborhood around Zuniga Park, just west of Beach Boulevard and north of Katella Avenue, as “the Benedict tract.”

And in highly transient Southern California, one of the distinguishing characteristics of the Benedict tract is the stability of its residents. Neighbors, unrelated to each other, can trace family living in the neighborhood back to the 1930s and possibly earlier.

Naomi Bill’s newlywed grandparents rented a home in the Benedict tract in the 1930s. When it burned in 1944, she said, her grandfather paid $10 for a nearby empty lot and then had a house that was built in 1919 moved onto the site from Newport Beach.

That’s the home where Bill’s mother was born and where Bill lives today with the two youngest of her three children. Her oldest daughter and Bill’s two grandchildren live nearby.

“There are a lot of people here who have the same story I do,” said Bill. She has an uncle living in the old home of her other set of grandparents, and nearby are a couple of great aunts and numerous cousins and other relatives. “I have cousins on every single street,” she said.

Bonds like those in Bill’s family are what spurred her and her neighbors to fight for their small park.

Ideally, a city should have four acres of neighborhood parks for every 1,000 residents. But according to the Center for Demographic Research at Cal State Fullerton, in Stanton there is just one acre of parkland for every 1,830 people, the worst ratio in the county.

The city was incorporated in 1956 during the frantic, post-World War II building boom that saw most of North Orange County transform at unprecedented speed from agriculture and open space to hastily planned housing tracts.

According to the county archives, “tract housing was beginning to move into Stanton, and the residents realized that if they didn’t do something, they were just going to get swallowed up into one of the neighboring cities — or more likely broken up into several neighboring cities.”

The park named for Zuniga was created in stages. First, a small Mother’s Cookies warehouse was torn down. Later, two houses next to the warehouse were removed.

“Borrow Robert’s snow cone machine,” called out one man during a neighborhood meeting last week around a picnic table in Victor Zuniga Park. As everyone there knew, “Robert” was one of Duque’s cousins.

“The yard sale has to be in August,” came another voice. “Yes,” a woman replied. “In July, I have three family birthdays and a quinceañera.”

Fliers announcing the yard sale fundraiser and another featuring a handball competition are being drafted in English and Spanish. The goal is to raise $2,500 to keep the park open for a year.

“We’re mixed race now,” said Bill, “but back in the day, it was all Latinos living here.” But, she said, the fliers will be in Spanish and English because new families have moved to the neighborhood. “We have a lot of Spanish-speaking families here. We want to get the whole community in the Benedict tract involved.”

The fundraisers are in addition to spontaneous volunteer workers, like Duque, who noticed holes in the basketball nets, bought replacements and had her cousin to install them. Another neighbor, who owns a landscaping business, mowed the grass when the city ran short of money and stopped sending workers.

“Everybody knows, if they have their birthday parties here, they have to pick up the trash, and they do,” said neighborhood resident Diana Medina.

Stanton’s situation became particularly acute when Gov. Jerry Brown’s plan to cut the stream of redevelopment dollars that had flowed to cities for decades took effect earlier this year. City leaders, facing the loss of redevelopment on top of already declining sales and property tax revenues, decided to cut funding not only for Zuniga but also for the town’s 10-acre Hollenbeck Park.

All told, City Manager Carol Jacobs is trying to cut $1.8 million and use the funds as a small reserve for a $14.6-million budget for 2012-2013. It costs $70,000 a year to keep Hollenbeck open and $2,500 to maintain Zuniga’s few features, including one basketball court, a handball court, drinking fountain and lawn.

So while children kicked a soccer ball around on the grass, drove toy cars on the basketball court and climbed on the jungle gym around dinnertime one evening last week, adults planned the fundraisers. The handball tournament is set for July 28 and the community yard sale in the park for Aug. 4.

Money raised will go to a nonprofit run by the city with donations designated specifically for operating Zuniga Park.

“We can send our kids to this park and not have to worry,” said Bill. “We have many eyes on the park when it comes to kids playing there.”

And a warning to whomever it was who spray-painted graffiti on a wall behind the park: Don’t let the parents and grandparents in the neighborhood catch you.

Said one woman, “I’d make them scrub it off with their bare hands.”