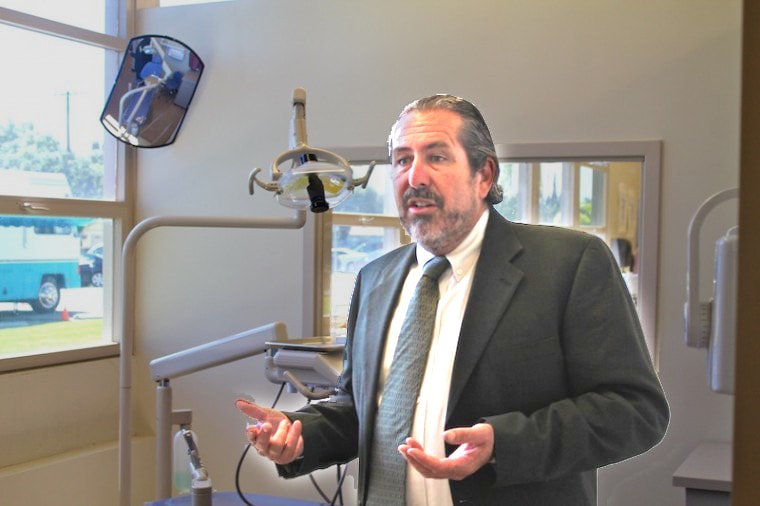 It’s not easy to keep up with Principal Patrick Yrarrazaval-Correa as he weaves through the busy hallways of Valley High School in Santa Ana. Radio in one hand, he admonishes one student to remove his ear buds and hustles a few more off to class with a brisk, “Let’s go, let’s go!”

Seconds later, he whirls around and points toward an empty hallway, explaining that this area will soon be a lobby and waiting room.

Next stop: a medical classroom, where he proudly shows off four exam rooms equipped with dental chairs and X-ray machines. In about two weeks, professionals here will begin seeing students and their family members in Orange County’s first permanent school-based dental clinic. There’s already a waiting list for appointments. The goal is not to turn anyone away.

“My vision for the school is a community center,” Yrarrazaval-Correa explains.

A similar mindset prevails just a few miles away at El Sol Science and Arts Academy, a kindergarten through eighth grade charter school in Santa Ana. In collaboration with UC Irvine and the nonprofit Share Our Selves, El Sol will replace its medical trailer on campus with a permanent, 3,000-square-foot, full-service clinic. The SOS-El Sol Wellness Center initially will treat students and their parents but eventually serve the surrounding community.

Valley High and El Sol embody the direction in which health care is going in Orange County and the nation, which is to bring permanent delivery of medical services directly to disadvantaged students and the people in their neighborhoods by way of school campuses.

Already, mobile vans offering medical and dental care make the rounds at a number of schools in Orange County, but the new permanent clinics are a huge step in the direction of more comprehensive school-based health services. These include immunization, chronic disease management, mental health counseling and other services primarily for low-income patients with public insurance or no insurance.

The value of school-based health care is symbolic as well as practical, said Mike Ruane, executive director of the Children & Families Commission of Orange County and temporary CEO of CalOptima, the county’s health plan for poor and elderly residents.

“It makes the connection between health and educational achievement,” Ruane said, citing the primary goal of reduced absences and improved academic performance. “Children can’t learn if they’re not healthy or they’re in pain.”

A key focus of school-based medical treatment is prevention and education, Ruane said “Obesity, diabetes and many oral health conditions are preventable if the family is aware and engaged.”

The commission recently announced a $500,000 grant to help build El Sol’s new facility, which will benefit from a $1.5-million federal grant as well.

“If you’re picking up a child at school with extended hours at an on-site medical clinic, it’s a lot easier to get immunizations done and to make appointments for yourself as well as the child,” said Professor Dylan Roby of the UCLA Fielding School of Public Health.

Convenience aside, advocates of smaller government are likely to view the centers as just one more example of federal overreach, particularly since new funding for school-based clinics was part of the Obama Administration’s controversial healthcare law. According to the proposed budget of vice presidential candidate Paul Ryan, this additional funding would end with a Republican administration, prompting cutbacks and closures, Roby said.

Another objection to school clinics is the treatment of sexual and reproductive health. Officials interviewed for this article said that school-based health providers in Orange County don’t dispense birth control. At El Sol, which stops at eighth grade, parents are expected to be involved in all aspects of their children’s care, according to El Sol’s executive director Monique Daviss.

Among Orange County school clinics, the funding, structure and missions vary depending on whether they are mobile units or full-time facilities.

For instance, in addition to filling cavities, the dentists at Valley High will provide learning opportunities for students pursuing dental careers through the school’s professional track. Valley High’s clinic is supported by an array of medical, business and philanthropic organizations, including St. Joseph Hospital and The California Endowment, which helps fund Voice of OC.

The Newport-Mesa Unified School District operates the Hope Clinic that focuses on physicals and immunizations needed for school enrollment. For many newly arrived students, Hope is their first encounter with a nurse or doctor. It is also a chance to educate families on insurance and steer them toward a “medical home,” which is jargon for a doctor’s office where their records are kept and where they get regular care.

El Sol’s clinic, meanwhile, is not run by the school district but by Share Our Selves, in partnership with UC Irvine. The expanded medical center will offer dental services, extended hours, access to specialists, hospital privileges and prescriptions, serving as a medical home for patients. Organizers hope to bring wellness education into classrooms through the curriculum.

El Sol’s clinic will be run by nurse practitioners from UC Irvine’s Program in Nursing Science. They are licensed to manage primary care and dispense medication,. Sometime in the fall, the El Sol clinic will expand its weekly hours from 20 to 40, and the new facility is expected to be completed in 18 months.

A priority for all clinics, whether mobile or permanent, is the management of illnesses causing absences from schools, including asthma, which experts say is linked to absenteeism more than any other chronic disease.

Dental pain also distracts from school performance, with about 8 percent of Orange County’s Latino children missing one to two school days annually due to oral health problems, according to the California Health Interview Survey.

Schools began to take some responsibility for meeting students’ health needs in response to immunization efforts in the 1950s and ’60s, according to Roby of UCLA. School clinics emerged during the Great Society, with continuing bipartisan support and now new funding under the health care reform law, he said.

Public health experts such as Roby and Pamela Kahn of the Orange County Department of Education and of the California School Health Centers Association, assert that health care delivery at schools is the correct remedy for the currently reduced access to medical insurance.

Kahn added that schools are facing bigger health care challenges than in the past, whether it’s helping children using their asthma inhalers,  accommodating a child’s ventilator or keeping up with new vaccination requirements.

Both she and Roby point out that budget cutbacks have reduced school nursing staffs substantially. Now, for example, one or two nurses might oversee a staff of part-time aides for an entire district.

“Schools used to have a nurse in every school, every day,” said Kahn. “So we were quietly providing this care. Schools have been doing this for a very long time.”

Amy DePaul is a Voice of OC contributing writer and lecturer in the UC Irvine Literary Journalism program. You can reach her directly at [email protected]