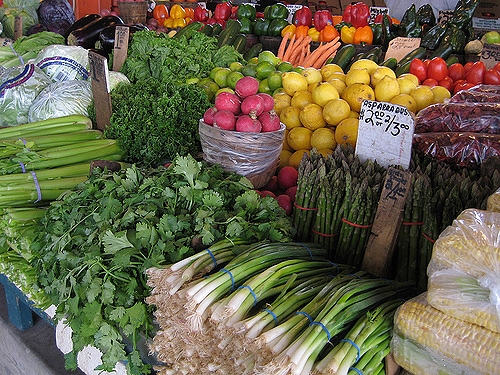 A forum this week that was intended to serve as a reset button for the planning of a farmers market in Santa Ana ended up being another example of the struggle among artists, other activists and business boosters for control of the downtown’s direction.

The forum at the Grand Central Art Center in Artists Village came after artists, worried that a farmers market would detract from already depressed art sales in the area, strongly criticized the downtown booster organization Downtown Inc. for planning a test run of the market during the monthly Santa Ana Art Walk.

Downtown Inc. scrapped those plans in the wake of the backlash, and at the forum, Downtown Inc. Executive Director Vicky Baxter acknowledged the lack of communication. “We didn’t do it right, I apologize for that,” she said.

The meeting, despite Baxter’s apologies and hope among officials that it would smooth ruffled feathers, at some points devolved into angry exchanges.

“What this is, is a discussion about ethics,” said Victor Payan, one of the organizers of OC Film Fiesta, when challenging Downtown Inc. over what he said were bad business practices.

The planned test run of a farmers market, intended to cater to local restaurant chefs, also drew criticism from  Lara Montagne, executive director of The Grain Project, who had said Downtown Inc. repeatedly rebuffed her attempts to make suggestions. Montagne’s nonprofit organization operated a downtown farmers market between 2005 and 2007.

There was a scramble at the start of the forum to find a Spanish translator for three attendees who didn’t speak English. Critics immediately pointed to the lack of translation as evidence that the forum’s organizers didn’t reach out to the whole community.

Montagne had also previously expressed frustration that, while she had presented the idea for a community meeting, it appeared that others had preempted her initiative by holding the forum.

It remains unclear exactly how a farmers market would be organized and who would run it. The consensus at the meeting was that Gillian Poe, executive director of the OC Food Access Coalition, would be an impartial facilitator at future meetings. But it’s not a final decision, according to Poe.

Poe said the next meeting would occur in November.

The move to form a coalition to plan the market and the apparent tension irked a few residents who had attended the forum hoping to see progress toward establishing the market.

Some expressed frustration about the process, saying that a dispute over who would control a farmers market is preventing one from materializing. And one resident said that since The Grain Project’s previous farmers market failed, another market headed by that organization would likely fail again.

“I wanted to buy a fresh carrot, and a lot is getting in the way,” said Debbie McEwen, a French Park neighborhood resident. “You’re adding hundreds of opinions to that carrot you’re going to buy. … Everyone’s going to be pulling that baby in a different direction.”

Montagne pointed out that SACReD, a coalition of many neighborhood, labor and activist groups, managed to persuade the City Council to approve a sunshine ordinance aimed at increasing transparency at City Hall, evidence that a group with many voices can accomplish something complicated.