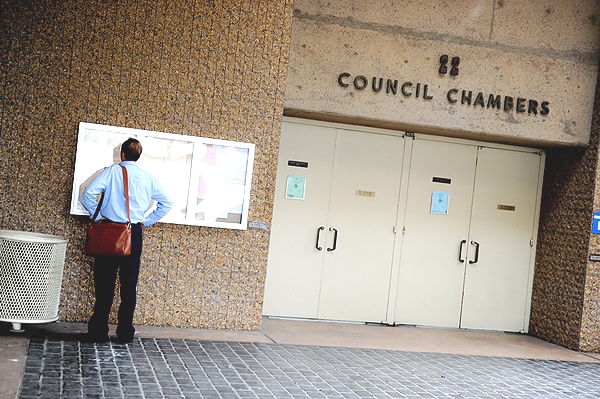 The Santa Ana City Council Monday night after hours of deliberation approved an ordinance designed to increase transparency at City Hall, a move that caused jubilation among activists who have been pushing for the law for more than six months.

A coalition of activists behind the sunshine ordinance, known as Santa Ana Collaborative for Responsible Development (SACReD), didn’t get everything they want. An oversight commission that would monitor how well developers deliver on promised benefits to the community and a mandatory lobbyist registry were cut from the final proposal.

Nonetheless, activists said, council members showed leadership by passing the law. Proponents rallied outside City Hall immediately after the approval was official, exchanging hugs and reveling in their victory.

“We have reached this very important point in the city. … Our comments are being taken into account, and we’re being listened to,” said activist and city resident Apolonio Cortes.

The ordinance must still come to the council for a second vote before it becomes law, and the slightest changes at the next meeting could postpone final approval.

The final compromise came after tense negotiations between city staff and council members over the pre-meeting requirement, which at one point were stalemated.

Construction trade union leaders also publicly opposed the ordinance at the meeting, and while they didn’t name specific provisions, the pre-meeting requirement affects construction significantly more than other sections. Union leaders complained that their membership is still suffering the lingering slump of the Great Recession.

“You should be breaking down barriers, not creating new ones. We need jobs,” said Jim Adams, Orange County representative of the Los Angeles-Orange Counties Building Trades Council.

Instead, Trevino proposed that the public comments be reflected in the city’s site plan review letter, which is assembled early in the development review process.

Some council members were perplexed by the notion that writing a letter responding to the concerns raised in the pre-meeting would be overly burdensome.

“I just don’t see how this is going to be a heavy burden,” said Councilman Sal Tinajero, who has been championing the sunshine ordinance since it was first proposed.

Pulido suggested that instead of requiring a developer response to pre-meeting comments, public notice for the pre-meeting would include tenants and not just property owners, which is the current requirement. That way more of the community is notified of the development and can raise their concerns.

“At least that’s not a burden on top of another burden,” Pulido said.

Councilman Vincent Sarmiento said that by making the process predictable — only one pre-meeting and a developer response — it would actually incentivize development. He said developers are frightened by cities with unclear processes, leaving open the potential for never-ending community review.

“I think this can be a business-friendly ordinance,” Sarmiento said.

There were also sharp disagreements over a provision that would void the ordinance’s pre-meeting requirements if they threatened a developer’s timeline for obtaining tax credits for affordable housing.

Ultimately, the council wasn’t able to approve the ordinance with a written response requirement because that would have forced a postponement of the vote until the next meeting, according to City Attorney Sonia Carvalho.

So instead they settled on requiring the developer to have a “response” to the community shortly after the pre-meeting. What form of response isn’t clear, but Trevino said it must be “a good faith response with some detail.”

The deliberation on the other sections was not nearly as detailed.

Councilwoman Michele Martinez attempted to revive the lobbyist registry and have it mirror Orange County’s registry, which requires lobbyists who are paid more than $500 to register with the county and file annual reports.

Martinez withdrew the language, however,  after Carvalho said that the ordinance couldn’t be passed that night with such a substantial change.

Tinajero cut a few words from the open calendars section that would have listed a “general statement of the issues discussed,” claiming it created more work for staff. Instead, the calendars would only list the names, titles and organizations at the meetings.

If the law passes its second vote, it will overturn a city policy to deny public disclosure of the calendars upon request, which open-government advocates say is illegal under the California Public Records Act. It would also have the calendars published online.

Tinajero, Alvarez and Martinez have all expressed their desire to see staff’s calendars. Tinajero said that a recent controversy over a special downtown tax could have been thwarted had council members known that a top city official was meeting with a downtown property owner to craft the tax district.

And it’s no secret that the calendar that will garner the most interest is Pulido’s. The longtime mayor resisted open calendars for months but relented Monday night.