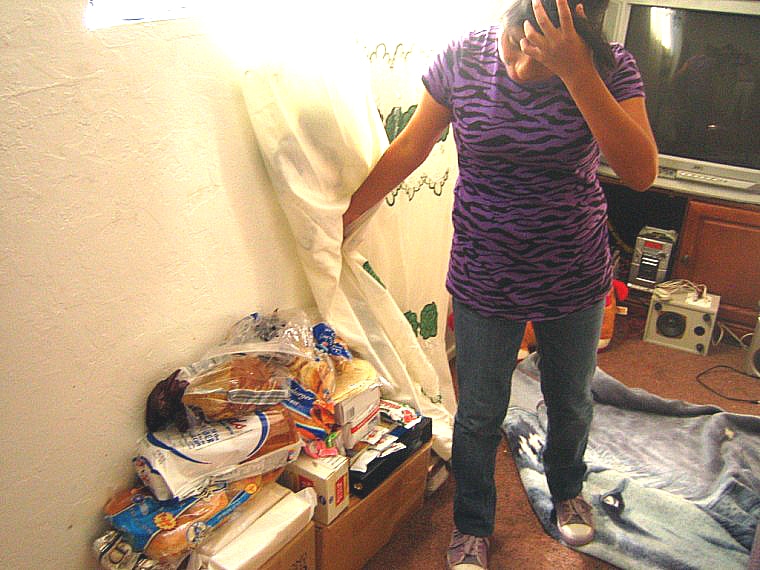 This is the first installment in a three-part series on housing insecurity in Orange County. Click to read parts two and three.

Antonio and his two children shared an apartment in central Santa Ana for a decade, but since he lost his job earlier this year, the family has moved twice, and another move seems imminent.

For now, Antonio and his 14-year-old daughter, Linda, whose real names were not used in this article, are living with a family who took them in temporarily. But when he will find work — and where they will live next — remain unknown.

Highly unreliable and even chaotic rental living is the norm among Orange County’s most economically vulnerable people. Job losses, evictions, faulty leases or no leases at all keep families like Antonio’s frequently on the move, a condition that experts call “housing insecurity.”

It is a way of life that destabilizes families and can expose them to health and safety threats ranging from asthma episodes to violent encounters with strangers they are living with.

Linda found out firsthand about some of these hazards when she slept on the floor of a room she shared with her brother and father this fall — right beside a stash of bread, grapes and other groceries that attracted ants.

Linda was put in that situation after Antonio lost his job with a dry cleaner in Anaheim Hills, which prompted the family’s first move into one room of a house with an extended family of eight. Their rent was $400 a month.

As the months wore on and Antonio was still without work, his 19-year-old son became the family’s breadwinner. It wasn’t long before the teen grew frustrated with the situation and moved out. A community assistance organization paid the September rent.

But such assistance does not last long, and then many families face the harsh reality of eviction, according to David Levy, housing rights advocate at the Fair Housing Council of Orange County.

It’s a common story. “The tenant lost their job and went through liquid cash,” Levy said. “[But] there’s no defense in that. We give them the news that ultimately they will be evicted.”

The Great Recession and the foreclosure crisis exacerbated what was already a difficult housing market for low-income residents, and evictions have shot up in recent years, according to experts — more than 14,000 countywide in fiscal year 2011-12.

The eviction caseload of Tustin attorney Steven Silverstein doubled in 2009 and enlarged about 10 percent this year, in large part because of landlord foreclosures that lead to renter home loss, he said.

“The economy’s been a tremendous boost to my business,” he said.

After foreclosure, clients who take over buildings often want tenants out so they can rehabilitate the building and start over with new tenants, Silverstein said. In these situations, current renters have the right to stay only if they meet certain conditions, including a standard written lease.

But lack of a written lease is common among low-income renters, Levy said. He added that sometimes tenants and landlord once had a lease but lost it long ago.

Also prevalent are cash-only rental payments and leases that fall short of professional standards, both of which contribute to housing instability. For example, a substandard lease that does not forbid illegal activity makes it harder for landlords to expel tenants who commit crimes and drive away other tenants. And cash payments are difficult to prove in eviction proceedings if a landlord falsely claims rent was not paid.

When someone is evicted, it is public record, and the resident’s name will be picked up by credit agencies, said Jonathan Ota, an attorney representing low-income Asian tenants in Los Angeles and Orange counties for the Asian Pacific American Legal Center. The evicted tenant is then relegated to renting from landlords who don’t require credit checks or written leases, often because they are facing foreclosure, which then increases the likelihood of more turnover.

Another problem arises when tenants stop paying rent to a landlord they suspect has lost the property to foreclosure. Renters find out about the foreclosure because of notices posted on buildings, though at this point the sale of the property may be postponed repeatedly, with timely information on the transaction difficult to obtain, Levy said.

“In this foreclosure crisis, much of the focus has been on homeowners, and renters have gotten lost in the shuffle,” Simitian wrote in a news release.

Advocates for property owners, such as Eric Wiegers, senior vice president of the California Apartment Association based in Sacramento, say that eviction is costly to landlords, most of whom are not eager to pay court and legal fees.

“The last thing you want to do is evict someone,” he said.

Levy, however, has found exceptions to this rule. He said abusive landlords have incentives in today’s competitive rental market to get tenants out of their buildings.

“In the normal business sense, if you’ve got a good, rent-paying tenant you want to keep that person. But if you want, there are 10 other people who will rent that unit from you tomorrow,” according to Levy. He said that he’s seen cases in which “landlords can make more money by offering a unit for rent and taking application fees and never renting the place at all.”

Unethical renters are known to attempt scams as well, according to Silverstein. During eviction proceedings, squatters and delinquent tenants sometimes falsify leases and receipts for unmade rental payments, he said.

Further complicating the situation for Antonio’s family and that of many others is immigration status. Antonio, for example, would have to use false identification to get the kind of job he wants, such as cashier. Knee and back problems keep him from doing physical labor, he said.

Immigrant status can be used to bully residents to bypass eviction altogether, according to Ota. “I’ve had a few landlords who threatened tenants who are undocumented to call immigration,” he said. Some people in the immigrant communities he serves are uncomfortable asserting themselves and would rather leave their homes than press for their rights, he said.

When it comes to landlord-tenant disputes, a large percentage of the Spanish-speaking residents seeking the council’s advice are renting from Spanish-speaking landlords, said Levy. Still, appearing in court can be intimidating for non-English speakers.

Legal language is also a cause for confusion. For example, tenants don’t always understand that they typically have five days to respond to an eviction notice or they automatically lose the case, said Vanessa Leonardo of the Public Law Center in Santa Ana, which represented low-income tenants in about 100 eviction cases last year.

In central Santa Ana, meanwhile, the next step for Antonio’s family is not clear.

A niece who moved back to live in Mexico was kidnapped, he said recently in an interview, making the possibility of return even more unappealing. Another option is to move to Riverside, where, Antonio said, a friend has a place in which he and Linda can live cheaply. Transportation remains a question, since he no longer owns a car.

Linda is just a few months into her first year of high school in Santa Ana. Every day after school she goes to Latino Health Access, a nonprofit community assistance group, where one of the program coordinators lets her sit in her office and do her homework. It’s a safe, welcoming, familiar place.

Like most kids, Linda is averse to moving and at first remained silent when asked about the prospect. Finally she said in a quiet voice, “I’ve kind of built my life here.”

Amy DePaul is a Voice of OC contributing writer and lecturer in the UC Irvine Literary Journalism program. You can reach her directly at [email protected].