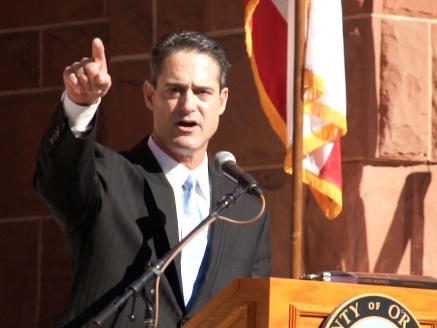 Later in the week we caught up with the supervisor to ask for specific thoughts on what issues regarding homelessness he would put as his highest priorities.

Spitzer reiterated his strong feelings on the subject, but to his credit, also acknowledged that he is not well-versed on the key challenges regarding homelessness and said he needs to educate himself on the issue before commenting at length.

“It is obviously is something I need to catch up with,” Spitzer said. “I don’t have any insights or epiphanies. … I gave some strong opinions, but I’m not an expert in this issue.”

The good news for Spitzer is that while there may be many shortages when it comes to help for homeless people in Orange County, there is not a shortage of experts who have been in the trenches and have a strong sense of what the county’s highest priorities should be.

Each was asked to advise Spitzer on what issues he should focus on. And though all were quick to say that the challenges facing homeless people are too numerous and complicated to cover in one conversation, they were nonetheless happy to point the supervisor in the right direction.

Among the experts’ suggestions for Spitzer and the rest of the county’s leadership, four rose to the top, the first relating to a principle we all learned in kindergarten.

Among the many gripes Smith has with how the county deals with homelessness is what he considers a lack of forthrightness about the true number of emergency shelter beds available.

To put it bluntly, Smith said, “it would be good for Orange County to stop lying about shelter beds.”

Smith said that he routinely hears officials say there are as many as 530 emergency shelter beds in the county, which in itself is a startling admission, given that estimates of the homeless population in Orange County go as high as 21,000.

However, even that number is significantly inflated, Smith said, because many of the beds officials are counting are for victims of domestic violence and not available to the general homeless population. The number of emergency beds available through the county’s armory program is 400, and these are available only from December to April.

Supervisors could be taking a big step in the right direction on this issue Tuesday by approving the purchase of a property in Fullerton that will serve as a year-round emergency shelter.

The approval would come none too early, said Leon, who continues to be astounded by the increase in homelessness even with the economy slowly improving.

“Last year we had 172 families redirected from the armories to Illumination Foundation housing between December and March,” Leon said. “This year we’re on track to have 250 families and a 30-percent increase in young children.”

Which brings us to the next suggestion from our advocates.

Focus First on the Sick and the Young

By Leon’s estimates, the 250 families redirected this year from the armory shelter program to the Illumination Foundation will include more than 400 children.

Smith contends that officials do not do nearly a good enough job of taking advantage of the vast number of hotel rooms in the county. For a relative pittance — about $60,000 annually — Smith says the county could create a hotel voucher program for homeless families.

“There is a great deal to be said for sending them to a hotel and asking them to see [Child Protective Services] in the morning,” Smith said. “Say you spend $100 for a bus pass and a room at the Red Roof Inn. … In the morning they get a ticket to CPS. … These families need supervision, and it has to come from somewhere.”

In addition to providing more help to families, the county needs to do a far better job of aiding homeless people who have been hospitalized, say the advocates.

Although a law sponsored by state Sen. Gil Cedillo (D-Los Angeles) was passed in 2007 that makes patient dumping by hospitals a crime, “no one can obey the anti-dumping law [in Orange County] because there is no place for the patients to go,” Smith said.

The Illumination Foundation actually has a program whereby hospitals pay $150 daily for up to 10 days for a homeless person just discharged from a hospital to stay in a hotel and be cared for by a registered nurse. But both Leon and Smith say the program needs to be expanded and compliance better policed.

The same can be said for cities when it comes to dealing with homelessness, which is why the advocates say the county must be a better leader on a regional basis and …

Force Cities to be Part of an Overall Solution

In talking with Leon, it became clear that perhaps his biggest pet peeve is the attitude individual cities have when dealing with their own homeless populations.

“Cities haven’t been willing to take responsibility for the problem,” Leon said. “They just want to blame other cities, pass an ordinance that chases the homeless away, … and I don’t think the county has the appetite to put any pressure on them.”

Palmer of the Rescue Mission said the cities must buy into a one-stop system in which shelters and a full compliment of services are under one roof. “We would be able to actually point people to a facility they can walk into to learn the steps they need to take to get off the street,” he said.

But, he added, “the real trick comes when you attach beds, an actual shelter. That is when you get the [not in my backyard] syndrome. That is the hardest thing for the supervisors to stand up to.”

Which is why supervisors must …

Palmer said that for a public official, homelessness is an issue that “literally burns and wears you out. … You stick your neck out so far, and the business community beats you up or the federal funding doesn’t come through. … It is a real challenge for elected officials to stay proactive and positive.”

Leon echoed Palmer, saying that when high-level public officials make an effort, tangible results can be seen at the street level.

Leon said he as watched Supervisors John Moorlach and Bill Campbell take up the cause at different points. He’s also seen programs run by the Children and Families Commission work well.

“We can see the effect in the community when politicians make it a priority,” Leon said. “But they don’t sustain it. For some reason or another they don’t stay committed. We’ve had a couple temporary champions but no one who’s said: ‘I’m going to do this thing and see it through.’ “

Your mission, Supervisor Spitzer, should you choose to accept it …