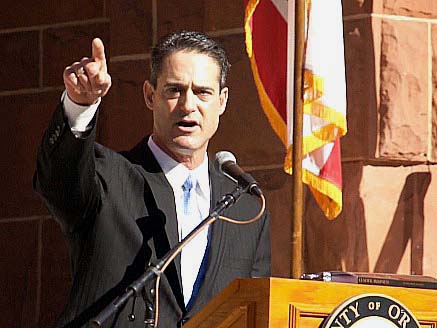 But is Spitzer much different?

According to the Orange County Register, domestic violence victim Lori Galvin hired Spitzer, then a private attorney, to represent her as she sought restitution last year. Spitzer was sworn into office in January and a judge awarded Galvin more than $25,000 in April. Galvin filed a $24,500 claim against the County of Orange in May to recoup Spitzer’s legal fees. Spitzer, now a sitting county supervisor, recently admitted researching and coauthoring the claim against the county.

This is a clear conflict of interest.

The law prevents state officials from profiting by representing outside entities in issues pertaining to the state. There is no similar law that applies to county officials, so Spitzer’s actions are not illegal. But are they ethical? Are they appropriate? Does this meet the highest standards of integrity we should demand of all of our public officials? Is Spitzer a hypocrite for attacking John Williams when he himself engages in questionable conduct?

Spitzer now claims he will donate the money back to the county. If this was his intention all along, he seems to have too much time on his hands given that he is dedicating his energy to an unnecessary legal battle.

This illuminates a much larger issue. I have often asserted that Orange County does not need a full-time board of supervisors. Former Supervisor Marian Bergeson once proposed eliminating the board and replacing it with a council of city leaders. At a minimum, a county such as Orange with very little unincorporated land would benefit from part-time supervisors. The number of citizens who live in unincorporated areas is smaller than the population of Irvine. Why do we need full-time elected county officials?

If supervisors disagree and insist that their work requires a full-time taxpayer-funded salary, how do they find time to maintain other jobs, which is what Spitzer does with his existing law practice? Three of these five full-time supervisors are also full-time political candidates: Pat Bates and Janet Nguyen are running for state Senate, and John Moorlach is running to represent a congressional district in which he does not reside. Spitzer will be the fourth candidate if he runs for district attorney.

This full-time board does nothing positive for Orange County. Moorlach, who claims he is a champion of fiscal conservatism, opts for a lucrative, taxpayer-funded pension plan for himself. We pay Janet Nguyen’s sister,Hong Nguyen, who once logged an average of 22 hours per week, $73,700 per year.

We can place an initiative on next year’s ballot that reclassifies these career politicians as part-time and eliminates their costly and unnecessary medical and pension benefits.

What are we waiting for?