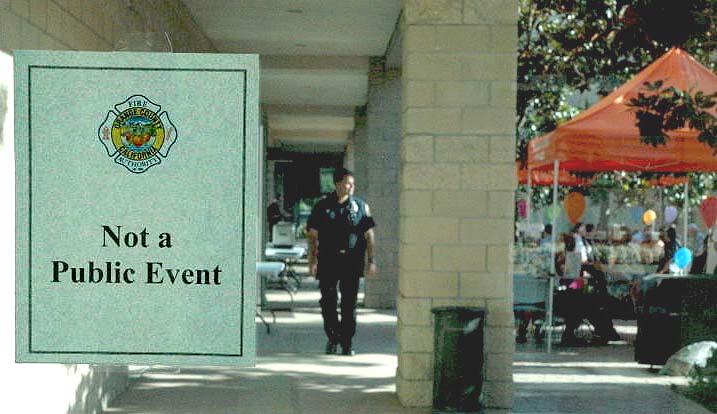 “Not a Public Event.”

That was the unofficial marquee for the Orange County Fire Authority’s annual barbeque late last week held for the two dozen local elected officials who serve on the agency’s board of directors.

Free food is just one of the many perks, such as pension benefits, stipends and health insurance, that the elected class receives for their public service. All told, the fire authority or OCFA spends about $3,500 a year on meals for the two dozen board members who attend a monthly public meeting.

But while the barbeque is free to the electeds, it is not paid for by taxpayer dollars, at least not directly, insisted OCFA representatives. Fire Chief Keith Richter donates the food, and the agency’s 11-member hand crew that is on shift is directed to provide the labor for set-up and cooking, according to outgoing OCFA Communications Director Kris Concepcion.

“It’s their own private event, and the Fire Chief pays for it out of his own pocket,” said Concepcion.

However, agency officials would not provide any documentation on what this year’s event — which was Hawaiian-themed and preceded Thursday’s regular board meeting — cost Chief Richter.

It is perfectly acceptable for board members to partake in the barbeque as well as the free food they usually get at board meetings, officials said, because the meetings are at night and they don’t otherwise have an opportunity to eat dinner.

Yet not one offered anything, other than free water, to Roger Acosta and his family last week as they sat in the OCFA lobby just outside the private board reception.

The 40-year-old Tustin resident was there Thursday night to be honored for his heroism in attempting to save a woman from an apartment fire. Acosta, who has scars from the fire on his arm, waited with his family in the reception area for the private board barbeque to end and the monthly public meeting to commence.

“This is public money and public money shouldn’t be used for a private event,” Lalloway said before entering the event with his wife and two daughters. “I’ll bring this up.”

Union officials with the Orange County Professional Firefighters Association, Local 3631, also said they would ask questions about why the hand crew, eliminated at one point in recent years because of budget pressures, is being used to cook for board members.

There are also questions about whether the board reception held at OCFA violated the state’s open meetings laws.

Upon denying a reporter access to the reception, OCFA General Counsel David Kendig argued that the state’s open meetings laws has an exception allowing elected officials to gather at private social events as long as they don’t talk about policy.

“I’m fairly confident that a barbeque would be a social event,” Kendig said.

However, Terry Francke, general counsel for CalAware and an open-records consultant for Voice of OC, said the meeting violated the law because the exception in the state’s open meetings law, known as the Ralph M. Brown Act, applies only to purely social events, like a wedding, not events connected to official meetings.

Francke noted that the exception for purely social events “has to be interpreted as applying only to events having an independent social purpose that would take place whether or not a legislative body attended or not.”

He added: “The obvious purpose of this carve-out is to protect members of the body from triggering suspicion or accusations of violating the Brown Act when a majority show up at an event that has absolutely no government significance or connection.”

But, Francke said, at an event like the barbeque that is “sponsored and funded by a local agency and the members’ attendance is by express and exclusive invitation (other than the agency’s employees), there may be some social interchange, but the constitutional requirement to read limitations on the Brown Act narrowly dictates that the occasion cannot be treated as ‘purely’ social.

“Otherwise,” he said, “local councils and boards could close the doors, post no notice and later explain: ‘We were just having fun.’ “

Ironically, at the regular meeting that followed the private barbeque, OCFA board members considered in closed session whether to file suit against the Orange County Employees Retirement System) for possible Brown Act violations.