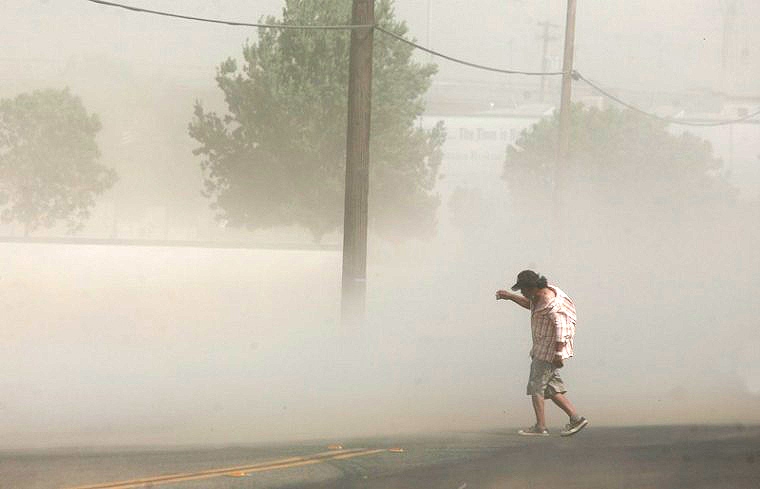 Dust storms like this one that blasted Fresno in June 2012 can carry millions of spores from the fungus that causes Valley Fever. (Photo by: Craig Kohlruss / Fresno Bee)

California prisoner Louis Baca and his family tried everything they could think of to keep the convicted murderer out of Pleasant Valley State Prison.

They pleaded with prison counselors. They called the office of the federal receiver assigned to manage California inmates’ health care. Baca himself tried to appeal the decision to move him from Mule Creek State Prison southeast of Sacramento to the prison in Fresno County.

Following a federal court order, the state is moving hundreds of inmates deemed to be at higher risk of developing serious cases of valley fever out of Pleasant Valley and Avenal state prisons. Rates of valley fever among prisoners at those two facilities have been substantially higher than among the rest of Californians: more than 1,000 times higher at Pleasant Valley and 189 times higher at Avenal.

But as those high-risk prisoners leave, the state is moving hundreds of new inmates, including Baca, into those two prisons.

The inmate and his family believe that the 35-year-old man, who is serving a life sentence for first degree murder, will be in jeopardy of contracting valley fever at Pleasant Valley.

“My nephew got a life sentence, not a death sentence, and this is a potential death sentence,” said Gilbert Robledo, Baca’s uncle. “If he comes down with [valley fever] somebody’s got to be accountable.”

In the past five years, more than 1,000 Pleasant Valley inmates have fallen ill with valley fever, the perplexing and sometimes deadly disease that has for years been a bane of the California Department of Corrections and Rehabilitation.

Caused by inhaling fungal spores, the disease costs the state prison system about $23 million annually in inmate health care and has opened up the system to a class action lawsuit on behalf of current and former inmates who contracted the disease while in prison.

“I just feel like my life’s on the line here, and I don’t know what’s going to happen after this,” Baca said in a phone call from Mule Creek prior to his transfer.

Despite his appeal and his family’s efforts, Baca was certain he would be transferred on Aug. 16. By noon he had taken all his property — a box of legal paperwork, letters, cards, pictures, CDs, toiletries and a television set — to be packed by officers in the receiving and releasing area.

Baca and his family acknowledge he did wrong. He was convicted in 1998 of pulling the trigger in a fatal drive-by shooting. But his sentence doesn’t mean he should be put in a place where he is much more likely to develop a chronic and often deadly disease, said his relatives in Hayward. They worry that his asthma will make him more susceptible.

Twenty-nine inmate deaths have been attributed to valley fever since 2006. The disease was listed as a secondary cause in 11 deaths and a tertiary cause in five others. Of the inmates killed by valley fever, 64 percent were black, 20 percent were Latino and 16 percent were white, according to the federal receiver’s office.

Certain inmates, including blacks and Filipinos, as well as prisoners with diabetes, HIV and other immune-suppressing conditions, were identified as groups that should be excluded from the two prisons, according to the court order.

By mid-August about 815 inmates had been moved out of Avenal and Pleasant Valley, and about 300 prisoners were expected to have been moved into the two prisons, according to the corrections department.

But families of the inmates being moved to the two prisons wonder: If those prisons aren’t safe for some inmates, are they safe for their loved ones?

About two-thirds of valley fever cases identified among California’s state prisoners from 2008 to 2012 occurred in Pleasant Valley and Avenal state prisons, according to data from the receiver’s office.

While most people with valley fever will never experience any symptoms of the disease, some develop an excruciating illness that can spread to their brains, bones and skin. Doctors and valley fever experts don’t know why some people become so sick while others remain healthy.

It’s also a mystery why certain people are hit harder by the disease.

Dr. Royce Johnson, professor of medicine at UCLA and Kern Medical Center’s chief of infectious disease, said moving certain inmates out of Avenal and Pleasant Valley is an oversimplified approach to a complicated disease.

“The decision-making process about Pleasant Valley does not, in my mind, square with the science of cocci [valley fever],” Johnson said.

While black men are more likely to develop disseminated valley fever that spreads beyond their lungs, Johnson said not enough is known about the disease to truly pinpoint who will be more likely to get a serious case.

“You can’t really tell by sitting in front of someone and looking at their age and race and sex and know exactly what their risk is,” Johnson said. “They’ve decided, literally, that life is black and white. There’s nothing black and white about this disease. Everything is complicated — actually, amazingly complicated.”

Pleasant Valley has the “highest rate of cocci in the known world by far,” Johnson said. He believes the prison should be closed.

Other concerned prisoner advocates and family members agree. But Jeffrey Callison, press secretary for the corrections department, said shutting down the prisons is not an option, especially when the state is under a federal court order to reduce its prison population. That court order requires the state’s prison system to reduce its population by about 10,000 inmates by the end of the year.

“We can’t just close these prisons,” he said of Avenal and Pleasant Valley. “We have to keep them open. We can’t have two half-empty prisons.”

Prisoners deemed to be at high risk at Avenal and Pleasant Valley can elect to stay if they don’t want to be moved. For inmates who don’t want to be transferred into those prisons, the process is not as straightforward, Callison said. Inmates have to file an appeal form to protest their transfer.

“I know that there have been a lot of the inmates and their families [who] have expressed concerns,” Callison said.

Whether the prisons are safe for anyone is “a very good question that hasn’t been answered at this moment,” said Donald Specter, director of the Berkeley-based Prison Law Office. “We don’t really have the answer,” he said.

In addition to moving high-risk inmates, the court order also required the state to seek help from the Centers for Disease Control and Prevention and the National Institute of Occupational Safety and Health to conduct an epidemiological evaluation of the two prisons.

Warren George, staff attorney with the Prison Law Office, said the group hopes to have clarified what other inmates should be excluded from the two prisons based on those findings, but that may take several months.

“The court order is what the court order is,” George said. “Until there are other exclusionary criteria categorized with enough authority, we’re kind of stuck with what we’ve got right now.”

The courts likely will have more to say about the way the prison system is handling valley fever in the months and years to come. In July, a class action lawsuit was filed on behalf of current and former inmates who contracted valley fever while at Avenal or Pleasant Valley.

One of the law firms involved in the case also helped secure a $425,000 settlement from the federal government last year for a former inmate who developed valley fever while incarcerated at Taft Correctional Institution.

“They were very concerned about their [loved ones’] risks of contracting this disease and feeling like this was a death sentence,” Ben Wang, co-chairman of the Asian Prisoner Support Committee in Oakland, said of the families and prisoners he has spoken with.

To protest the transfers, Wang’s group helped organize a rally early this month at California State Prison, Solano, located in Vacaville. The group has also launched an online petition protesting the transfer of high-risk prisoners, “including people of African, Asian, and Pacific Islander descent” and calling for the relocation of all inmates in Pleasant Valley and Avenal.

The petition had gathered more than 2,000 signatures by last week.

Waiting for the Transfer

The prospect of their loved ones being moved to Avenal or Pleasant Valley is scary, family members and significant others told The Bakersfield Californian, because their kin will be exposed to the potentially deadly disease. They also fear that family members in poor health will not be able to visit inmates for fear of exposure to valley fever, as the disease can strike harder in people with weakened immune systems.

“The more I read [about the disease], the more I thought, ‘How could they do this?’ I mean, how inhuman,” said Desert Hot Springs resident Teresa Stucki.

Stucki said her son, who was convicted of multiple crimes including second-degree robbery, may be transferred to Avenal State Prison.

“I know that my son did wrong, and he deserves to be in prison, but he doesn’t deserve to be put in a place where it is known that there is this horrible valley fever,” Stucki said.

By Aug. 20, Baca was in Pleasant Valley State Prison, according to the correction department’s website. In the days after Baca’s transfer, his family members were still struggling with the move.

“I was really heartbroken,” said Mary Robledo, Baca’s maternal grandmother who raised him.

Corrections spokesmen said that for security reasons the department does not release information about individual inmate transfers and that Mule Creek is not involved in the transfers stemming from the court order regarding valley fever.

Gilbert Robledo, Baca’s uncle, wondered whether it would be risky for family members who have had cancer to visit Baca.

“Healthwise, I don’t know [whether it is safe],” Robledo said.

Christopher Meyers, director of the Kegley Institute of Ethics at Cal State Bakersfield, said the families’ concerns highlight the key ethical dilemma of the transfers under way.

“Being sentenced to life in prison for murder isn’t the same as being sentenced to situations where life and health is threatened,” Meyers said. “Long term we clearly have to figure out a better way to do this.”

Reporting on Health Collaborative involves The Bakersfield Californian, the Merced Sun-Star, Radio Bilingue in Fresno, The Record in Stockton, Valley Public Radio in Fresno and Bakersfield, Vida en el Valle in Fresno, the Voice of OC in Santa Ana and ReportingonHealth.org. It’s an initiative of The California Endowment Health Journalism Fellowships at the USC’s Annenberg School for Communication and Journalism.